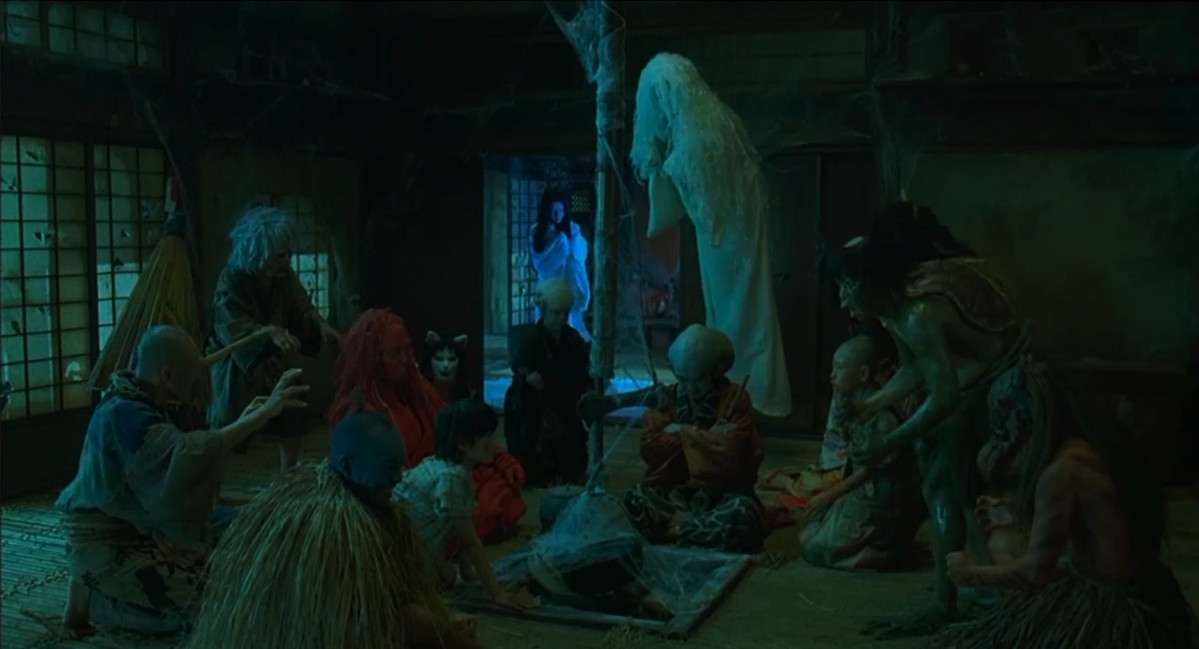 Charming but wildly uneven Takashi Miike curiosity, full of humour but doesn’t quite hit the mark…

So once you dive down the rabbit hole of Takashi Miike’s cinematic CV, you come across folk that talk about how he changed from being the Enfant terrible of modern Japanese cinema, to being part of the mainstream. Usually the film that is credited as being the crossover point is his family-friendly fantasy film The Great Yokai War. Personally I am not entirely convinced by this analysis, but I was keen to finally watch it, as it hasn’t had a UK release previously (I could be wrong). So it was with great interest I got to look at it as part of this Arrow Boxset, especially as Miike’s latest endeavour is a sequel of sorts.

The film itself is the loosest of retellings of the story from 1968’s Spook Warfare, but wrapped up in the classic family film tropes – a young boy called Tadashi (Ryūnosuke Kamiki, As the Gods Will)  is sent away for the summer to his grandfather’s house while his parents undergo a divorce. He’s marked during a local festival as the Kirin Rider, basically the latest incarnation of a legendary hero. Turns out there is a character called Yasunori Katō (Etsushi Toyokawa, New Battles Without Honor and Humanity), who is disgusted at the wasteful nature of the modern world and is turning the mostly peaceful Yōkai into metal killing machines, with the help of the treacherous Aki (Chiaki Kuriyama, Battle Royale). It’s up to Tadasi, his magical (albeit broken) sword and a ragtag gang of Yōkai to take the battle to the streets of Tokyo and somehow defeat Katō and his creations.

This really is a strange little movie, taking inspiration not only from the three films that made up the original trilogy, but also the works of Manga creator Mizuki Shigeru, whose GeGeGe no Kitarō would also get their own live-action and anime outings in this period. Shigeru gets a lovely little homage and a cameo to underline his importance to this sub-genre.

It’s hard to be too mean to the film, as it is really a lovely little homage to Yōkai-based entertainment, but it’s also a horrible mess. The first half is pretty darn scary, and I would question its suitability for the youngest members of a family. Character’s like Tadashi’s Grandfather, Mother and Sister are all introduced, and then mostly ignored, or barely referenced again – I swear there’s a scene where the mother comes home drunk from a party, which leads to nothing, and his sister is literally reduced to a screen capture later on. Furthermore, Kuriyama is used as little more than fan service, dressed up in a sexy white figure-hugging costume and a whip, and whilst I suppose she is filling some Tokusatsu tropes, she feels utterly wasted here.

The film does perk up in the middle section, when some of the Yōkai are given more screen time and depth, with Sado Abe’s (Uzumaki) Kappa/Kawatarō giving some great comic relief, and Mai Takahashi’s (Fish Story) River Spirit giving the Yōkai some genuine heart. The humour in the film, in general, is pretty good, with some nice slapstick, a hilarious moment when the Yōkai decide to take a speedy shortcut on the wing of a large passenger plane, some nice sight gags (“What can I do? I am just an umbrella” opines one particular Yōkai, who indeed is just that. But then again, the Yōkai that is a wall has something to say about that), and some winks and nudges to both Gamera and Kitaro that made me smile. And whilst it might be the weakest on screen display of a hand puppet ever commuted to screen (except when it is literally a hat), the Sunekosuri that befriends Tadashi is gloriously endearing.

The ending sadly becomes a bit of a mess, with practical effects and some fairly average CGI combine to result in a less-Epic-than-it should-be final battle, on an onscreen stabbing that is at odds with the tone of the film, and the River Spirit giving reasoning to Katō suggesting that she hates humans too (all the while being part of a sub-story that says quite the opposite) but that she doesn’t want revenge because that is a human emotion…. Well, it’s frankly all over the place. Even the coda that sets up a future sequel seems a bit heartless.

The problem with the Great Yokai War is that it lacks a consistency of tone, and fails to really resolve the core ethos at the heart of the story – Katō is angry at the disposable nature of modernity, and nothing our heroes do address or debate the issue. There are some fun performances, and great little moments, and I’d be lying if I didn’t say I wasn’t entertained. But compared to other Miike adaptations of other people’s materials, it’s just a little too messy and slapdash. I wanted to love it, but sadly, I can’t do much more than grudgingly like it.

The Great Yokai War is released as part of the Yokai Monsters Collection from Arrow Video on 18 October 2021.