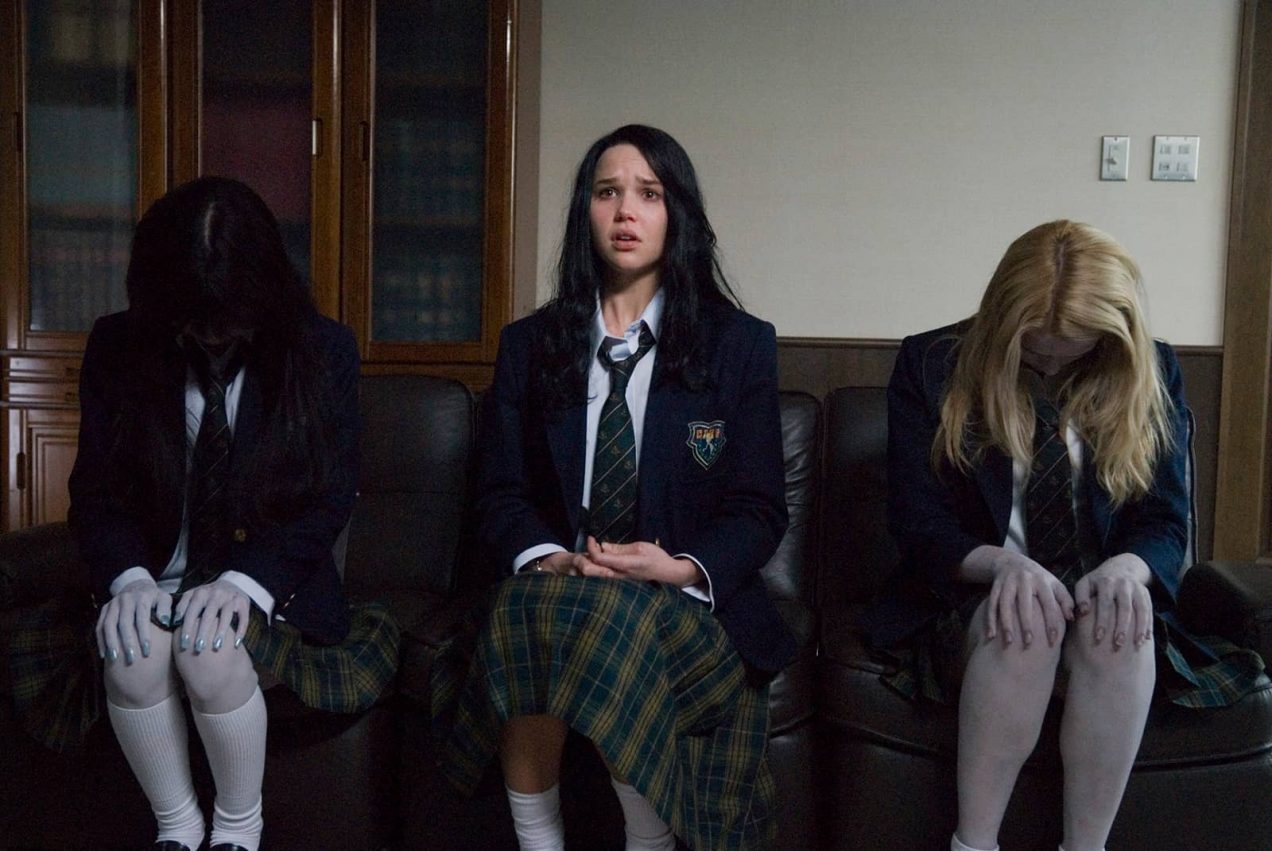 Although by 2006 most horror fans from pretty much anywhere in the world were getting a little tired of sulky long-haired ghosts and petty curses, Hollywood versions of Asian genre films were still very much a going concern, especially following the huge success of Ju-on remake The Grudge in 2004, which pulled in a mightily impressive USD$110 million at the domestic box office. A sequel was inevitable, though The Grudge 2 did at least come with solid credentials, and like its predecessor was directed by Japanese series creator Takashi Shimizu, was produced by Sam Raimi through his Ghost House Pictures company, and written by returning scribe Stephen Susco. Though the law of decreasing returns proved true, the film still made over USD$70 million in the US alone, and now receives another UK release on Blu-ray and DVD via Fabulous Films, coming with a host of deleted scenes and featurettes for the terminally curious.

The sequel picks up where the first film left off, with Aubrey (Amber Tamblyn), sister of original social worker protagonist Karen (Sarah Michelle Gellar), heading to Tokyo to visit her in hospital and bring her back to the US. Things don’t go as planned, and she teams with a journalist called Eason (A pre-scandal Edison Chen) to investigate the series’ central haunted house, where they happen upon Kayako’s diaries, and inevitably find themselves caught up in the usual curse. Meanwhile, a separate story plays out involving a group of girls from a local international school who visit the house on a dare, and another story charts sinister goings-on back in the US, which may or may not be connected to events in Tokyo.

If nothing else, it can be said that The Grudge did try and stick close to Ju-on, and with Takashi Shimizu at the helm it proved as effective a remake as could have been hoped, and successfully translated the story and scares into English, being all the better for keeping the Japanese setting. While a continuation of The Grudge rather than a remake of Ju-on 2, the sequel similarly makes an effort to exist within the same universe, and remains faithful to the franchise’s themes, with Shimizu attempting to explore Kayako’s origins in a way which links back to the Japanese films. The result is that, for better or worse, The Grudge 2 certainly feels like a bona fide and canon series entry, with the usual plot twists and employing the same fractured narrative technique, which this time are geographical as well as temporal. The fact that the film makes even less sense that its US or Japanese predecessors is really neither here nor there, and while newcomers will likely be totally baffled, Ju-on veterans should be comfortable approaching it as a surreal spookshow, if one that’s a little tired and drawn-out.

The main downside here is that, even back in 2006, very little about The Grudge 2 felt fresh or even particularly interesting, with Shimizu basically rehashing scenes and set pieces from previous films, and with the plot never really going anywhere. By then, the fractured narrative that the series was known for was pretty familiar, as was the behaviour of Kayako and kid-ghost Toshio, with their clicking and caterwauling now starting to grate on the nerves rather than alarming, and their propensity for showing up under duvets or desks edging towards self-parody. Although the film isn’t boring, and does have a few well-constructed frights, it feels very much by the numbers, especially by the standards of an imaginative and talented director like Shimizu, and matters aren’t helped by a lack of any gore or visceral impact – there is an Unrated Director’s Cut version of the film, which runs six minutes longer, though the version being re-released is the original theatrical cut, not that it makes a massive difference.

None of this is really the result of The Grudge 2 being a Hollywood rather than Japanese production, and its flaws are mainly down to the simple fact that the franchise was running out of steam. Given that, nearly fifteen years later, Ju-on and Grudge films and TV series are still being churned out in the east and west, there’s still clearly a fanbase for Kayako and her brand of senseless scares, though it’s fair to say that things still haven’t really moved on, meaning that The Grudge 2 is of passing interest only as a re-watch rather than possessing any kind of nostalgia value.

The Grudge 2 is released on remastered Blu-ray and DVD from Fabulous Films from 2 November. Don’t forget to enter our #HungryGhostHalloween Blu-ray giveaway!