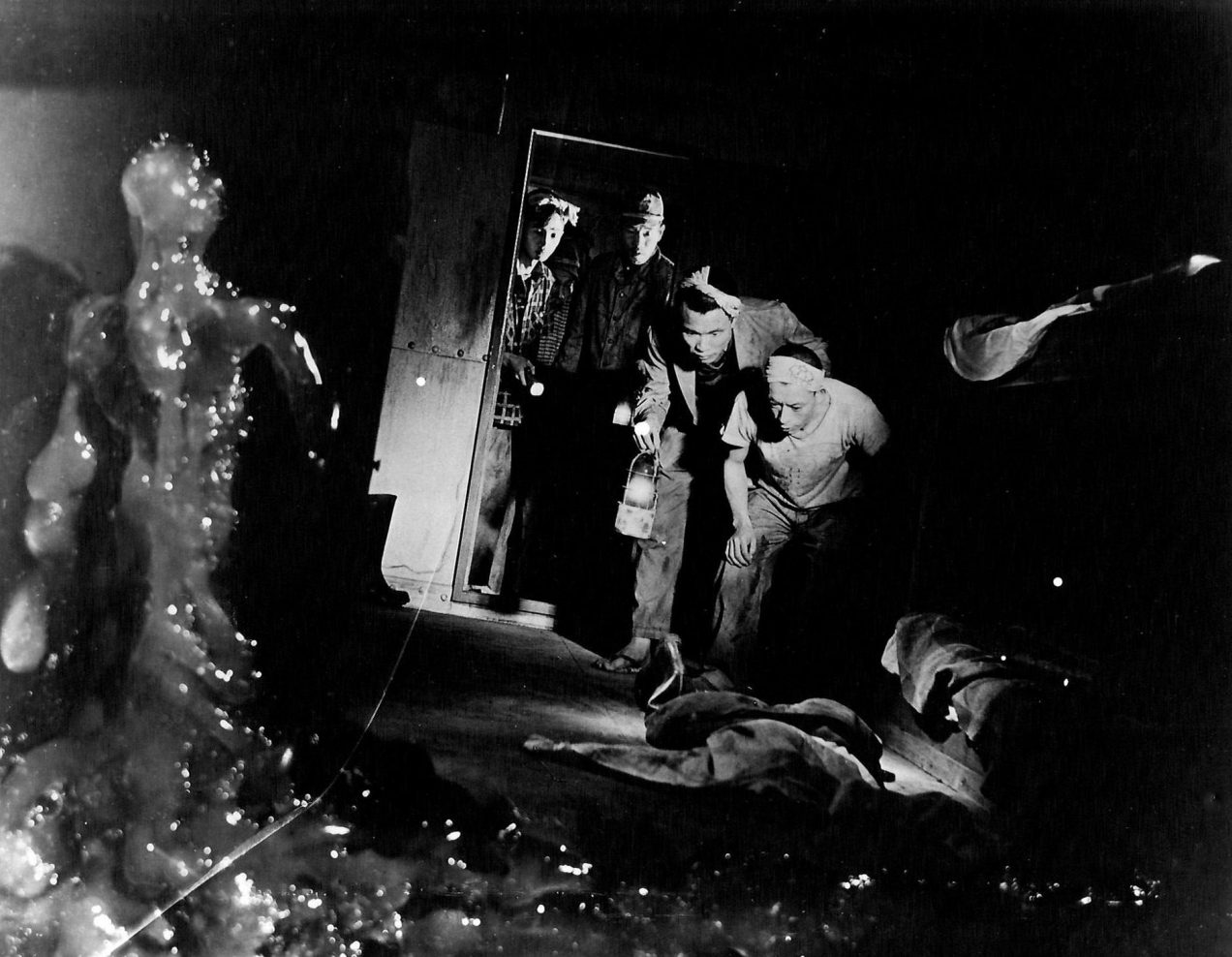 One rainy night in 1950’s Tokyo, a gangster in the middle of a drug deal disappears in plain sight, leaving only his clothes in the middle of the road. The Police, led by Detective Tominaga (Akihiko Hirata, Godzilla) start to investigate, and interrogate the missing man’s girlfriend, Nightclub dancer Chikako (Yumi Shirakawa, Rodan). The investigation gets nowhere, until they find a connection to Professor Masada (Kenji Sahara, Attack of the Mushroom People) who is known to Tominaga. Masada has a theory that the first victim was the victim of the results of a nuclear explosion. Whilst initially the Police scoff at the idea, eventually more victims mysteriously disappear, and the visual evidence points to the ideas Masada posits. As the city authorities work to deal with the menace, Chikako is kidnapped by another gangster, leading the lovestruck Masada on a chase against time to rescue the girl before it is too late.

The H-Man is an example of the post-war Japanese concern with the effects of the Atomic Bomb. The most famous of these movies are the classic Godzilla franchise, but studios such as Toho also produced films like this that took science fiction ideas other than that of giant fantastical beasts. Here they married together the cautionary tale of man’s dalliance with the hydrogen bomb with the seedy world of Gangsters and Nightclub singers. And whilst a movie with little more than B-Movie pretentions, on the whole, it works rather well.

Director Honda of course was behind the camera for Godzilla, but even though this was made only 4 years (but a staggering 15 films) later, in many ways it could be much more different. For one it is in bright Eastman Color, showcasing a seedier side of Tokyo – one full of light and nightclubs, full of noise and song. Even outside the dour police office you hear a vibrant world gong on, and in the climactic call to arms for the cities’ emergency services you see bright Fire Appliance zoom by, and a large cast of extras display city streets in panic. The cast as a whole are fairly engaging, consisting of familiar faces from other Toho productions of the era.

The Nightclub scenes are surprisingly good, especially when delivering a Police shakedown of the joint. A flashback to the genesis of the threat on an apparently abandoned ‘ghost ship’ is very effective, as is the final hunt through the threatened sewer system. The special effects are pretty ho-hum – mostly relying on running a camera backwards to create the effect of a deadly slime moving around, and some fairly nondescript green humanoid blobs that would not look out of place in a 1970’s episode of Dr Who.

Plot-wise the film tries to keep things fairly simple and straightforward. Sure, the science on show is fairly shaky, and the experiment showing the effects of radiation on some frog really didn’t need to be shown twice. However, for me, the biggest stumbling block I found with the movie was the lack of real explanation of exactly how Masada and Chikako actually knew each other before the start of the film. They are clearly close, but the script never really gets around to explaining their prior relationship.

The review copy I viewed was the American edit, which is of note for two reasons. Several minutes have been edited out, including one which actually explains why the creature(s) have made their way to Tokyo. Also the English dub appears to have either been done either by people who genuinely have English as a second language, or are mimicking what they think is a Japanese accent. It’s all a bit strange to listen too, especially in the two musical numbers.

The H-Man is a fairly superior B-Movie, that is well constructed on the whole, with some great moments that probably do enough to earn it an extra star. The overall synopsis with amorphous blob taking over a city does have remarkable similarities with the famous American film The Blob – which actually came out in the very same year. But whilst the American film was concerned with the emergence of youth culture and attacks from outer-space (as a metaphor for the threat from Russia), The H-Man is far more interested in the scars it suffered from the Atom Bomb a decade earlier. It is well worth tracking down if you get the chance.