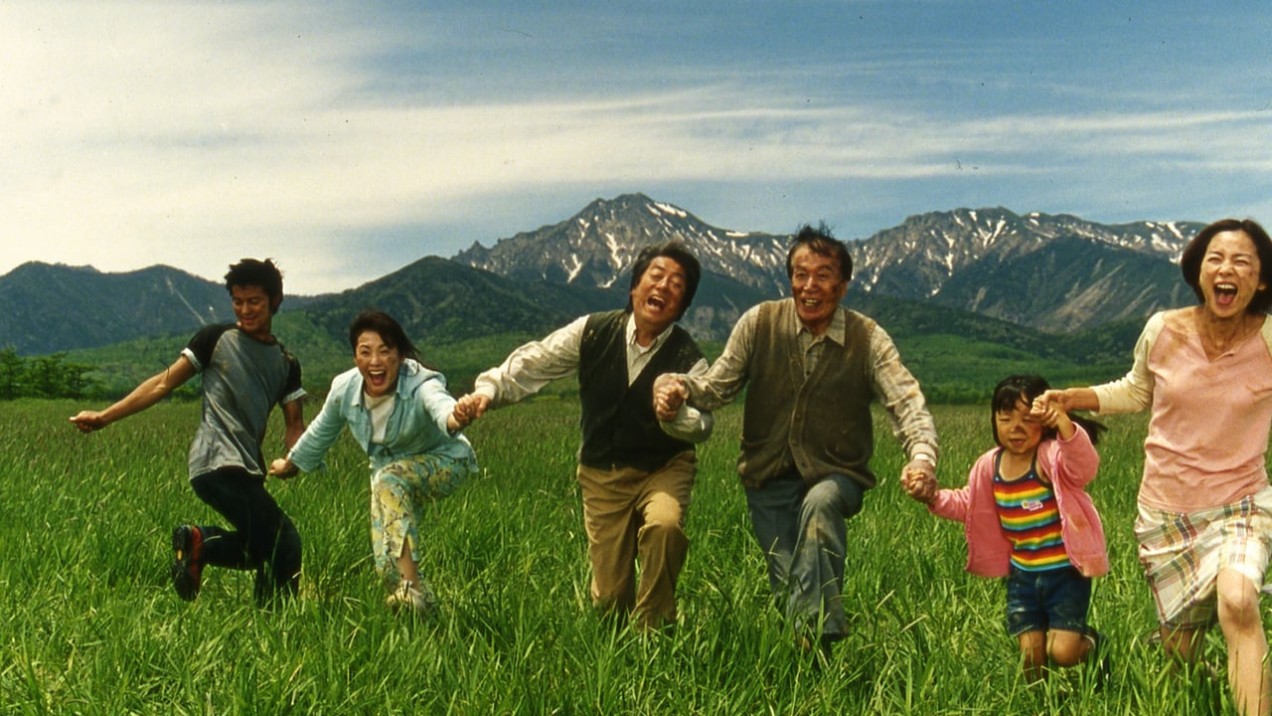 Strange and surreal even for Takashi Miike, with unexpected warmth and heart…

Strange and surreal even for a Takashi Miike film, The Happiness of the Katakuris will test the patience of those looking for more mainstream entertainment, yet provide unbridled joy for students of the bizarre. Strip out the craziness though, and you have a film with unexpected warmth and heart.

Meet the Katakuri family – The father Masao (Kenji Sawada), his loving wife Terue (Keiko Matsuzuka), their ex-con son Masayuki (Shinji Takeda), their divorced and desperate for love daughter Shizue (Naomi Nishida), her young daughter Yurie (Tamaki Miyazaki) and his near-senile father (Tetsuro Tanba). Masao loses his job as a shoe salesman, so decides to gather his family together and start up a guest house in a remote part of the country. He has heard that a major road is about to be built nearby, but it hadn’t materialised as yet, meaning paying guests have yet to check in at the beginning of the film. Even when they do, they tend to die before their first night is through. Terrified of getting a bad reputation before they have even started, Masao convinces his family to bury the bodies in the woods. At the same time Shizue falls for Richard (Kiyoshiro Imawano), who although being clearly Japanese, tells her he is not only a member of the British Royal Navy, but also a secret cousin of the Queen. And that’s not the strangest thing going on here. Add in the occasional claymation segment, amateurishly choreographed musical numbers, a desperate wife murderer and a climactic volcanic explosion and you’ve probably not even got all the craziness that is going on here.

Back in 2001 director Miike was still very much an outlier in the Japanese cinema world (he probably was more popular in the international festival circuit), and yet to be trusted with big money. The Happiness of the Katakuris wasn’t going to be the film that changed that, it baffled the local audience as much as the outsiders. I remember my first exposure to it, nearly a decade ago, and I was entranced. Recently Arrow Video have released a rather glorious Blu-ray of this, and I was intrigued to see if I still found it as enjoyable.

The source material here is Kim Jee-woon‘s deliciously black comedy The Quiet Family, but Miike takes the central idea and just lets himself go wild, creating a surreal alter ego to the original which stands on its own. Yet somewhere in this low budget and clearly largely improvised slice of cinematic lunacy, you’ll find something that is often lacking in Miike’s films of this period – a genuine warmth and heart.

The film opens with a claymation sequence that involves a woman finding a strange little demon in her soup, who then eats her uvula, gets eaten by a crow, which gets eaten by another animated demon, which gets… well you get the point. It’s a fun and crazy little exploration of the circle of life. And yet it has little to do with the film that follows. But then the suicidal TV critics, Sumo Wrestlers with schoolgirl girlfriends and conmen in Naval Uniforms don’t either. What the film is actually about is family, and it is never more obvious than on two occasions. Firstly, when a ‘normal’ hiking group pop in for tea and cake, and the family work together to provide a good experience for their guests. And secondly, when a strange family come stay the night and turn out to be everything both the viewer and Katakuri’s were NOT expecting.

Now I am on record as simply not being a fan of musicals at all. Fortunately, whilst the songs are plentiful, they are usually quite short, and actually work within the confines of this movie (even more oddly, Miike will later make the more traditional musical “For Loves Sake” which I personally adore). It is interesting to note that both Kenji Sawada and Kiyoshiro Imawano were bona fide Japanese rock stars, which is gloriously at odds with the amateur attempts at singing and dancing on display, and is probably part of the grand joke that is being played on the viewer that most Westerners are simply going to be unaware of.

The Claymation moments hold up well, and it was good to see that my original thoughts about potential inspiration of Czech surrealist Jan Svankmajer were indeed true. Maybe they were used to save on the budget for some of the more dramatic scenes, but they work so well in maintaining the hyper-reality of the film. Never more so when we slip into the Clay-verse for a final time, and Tetsuro Tanba’s character isn’t immediately replaced by a malleable alter-ego, and he looks at the screen and a I swear give the viewer a knowing wink.

One criticism I personally seem to have about Miike films is that they are usually too long, and would always be improved by trimming 10-20 minutes. This actually is a rare example of a Miike movie that feels just about right in terms of running time.

The good news is that the film remains a favourite of mine. The high-definition joys of Blu-ray give a cleaner and sharper picture than I could have believed possible. Of course this highlights the low-budget nature of the production, but this was never a movie that was about slick production values. What really makes this package is the extras, building upon the original Tartan release with excellent commentaries, interviews and a couple of special documentaries including a short visual essay by noted Miike expert Tom Mes which I wish was twice as long.

I know Happiness of the Katakuris is a film that divides even the biggest fans of Japanese cinema, especially those of the director. It doesn’t have the darkness of his films that he made in this period. It doesn’t have the control and genuine ability to unsettle of Audition, Ichi the Killer and Visitor Q. In fact it is almost a mirror image of the latter film. Visitor Q is disturbing, looking at the breakdown of Japanese family life in a hard to watch and disturbing way. The Happiness of the Katakuris celebrates family, revels in the group succeeding against all kinds of disasters. For me it is one Miike’s most positive and genuine films, even if it is dressed up in improvisation and surrealism.

The Happiness of the Katakuris is available now on dual format from Arrow Video. Miike’s Audition is released by Arrow Video on Blu-ray and Limited Edition Steelbook dual format on 29 February 2016.