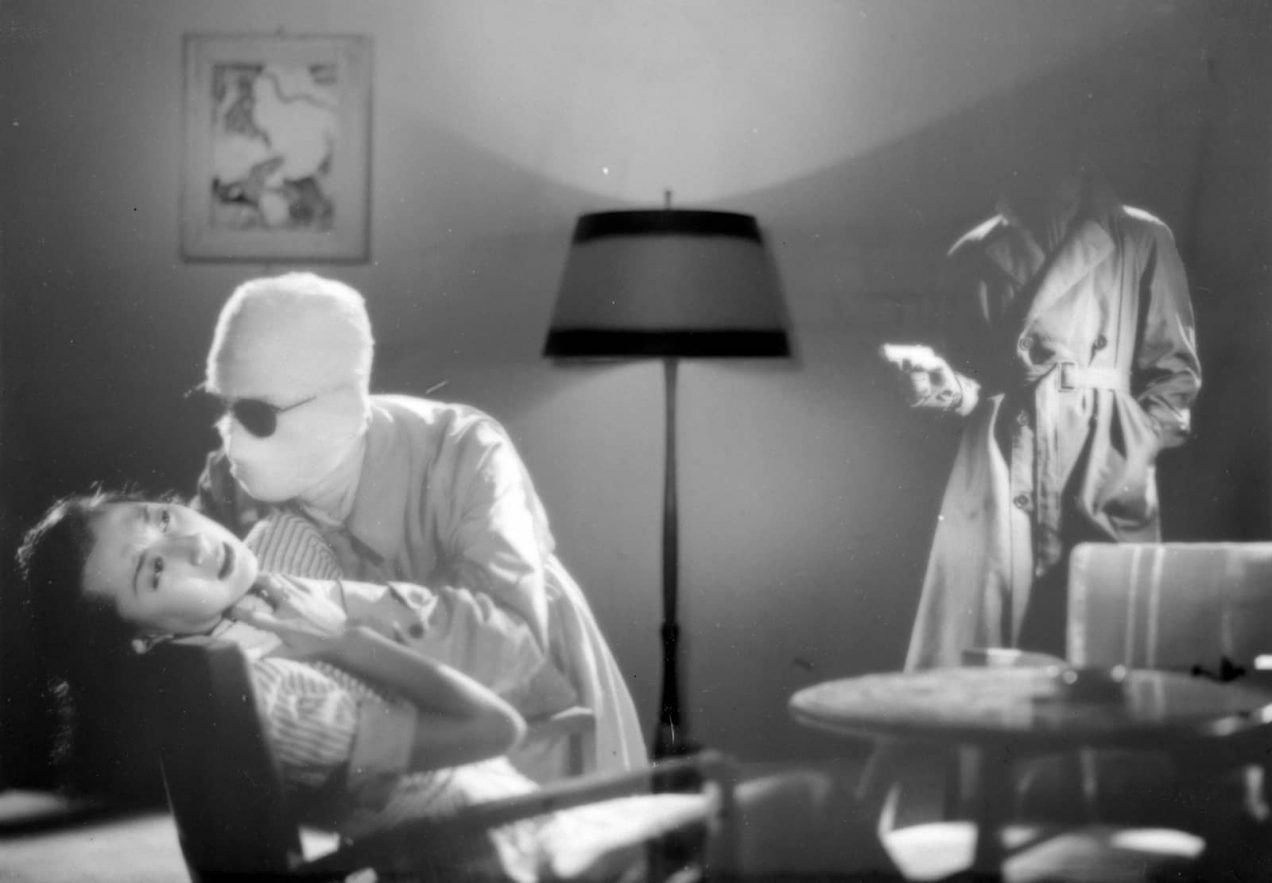 Adachi’s mystery sci-fi film remains, after all these years, a highly entertaining narrative…

The Invisible Man Appears (1949), written and directed by Nobuo Adachi, is one of the earliest surviving Japanese science fiction films and one of earliest examples of tokusatsu (special effects) cinema from Daiei Studios.

It is not difficult to understand why this film could be released in Occupied Japan. It offers a unique take on H.G Wells’ classic character, a character popularized in the USA by Universal Studios’ iconic film series. Additionally, while the story takes place in Japan, the visuals are completely westernized – the narrative is utterly devoid of visual references to anything traditionally Japanese.

The special effects of The Invisible Man Appears (1949), were supervised by the legendary Eiji Tsuburaya, who would, five years later, bring Godzilla to life. Tsuburaya, who was blacklisted during the occupation for his work on wartime propaganda films, succeeded in finding work in the Japanese film industry by establishing his own company, Tsuburaya Visual Effects Research, and helping studios, like Daiei, with special effects.

After ten years of research, Dr. Kenzo Nakazato (Ryonosuke Tsukigata) finally succeeded in making an experimental invisibility agent. While he keeps the results of his research a secret – even from his students, he decides, after hearing skepticism of Mr. Kawabe (Shôsaku Sugiyama) concerning his invention, to demonstrate the concoction to him. Then, one night, two masked men enter his laboratory to kidnap him and steal his invention. The same night, Mr. Kawabe approaches Dr. Shunji Kurokawa (Kanji Koshiba), one of Nakazato’s students, and tells him that if he can rescue Dr. Nakazato he will surely be able to marry his daughter Machiko (Chizuru Kitagawa).

The Invisible Man Appears is still, even after all these years, a highly entertaining and engaging narrative. That Adachi’s mystery crime sci-fi still succeeds in engaging the spectator is first and foremost function of the effective narrative structure. The structure is effective in evoking questions in the spectator’s mind, keeping him guessing, and giving him the necessary clues to piece it all together before the final showdown takes place.

By way of its structure, The Invisible Man Appears confronts the spectator with the following questions: Who is the invisible man? Could it be Dr. Nakazato? Why does the invisible man want to steal the necklace called Tears of Amour? Will Dr. Kurokawa be able to find Dr. Nakazato and rescue him? What role does Mr. Kawabe, who has shown to be interested in Tears of Amour and Nakazato’s invisibility concoction, play in all this? What are his true intentions?

Yet, despite the effective narrative structure, one feels that the narrative is a bit too complex for its own good and that certain plot-devices border on the absurd. Adachi’s narrative is, in fact, best enjoyed if one can pause one’s critical mind. The complexity of the narrative, furthermore, leads to a somewhat confusing finale. Adachi tries his best to craft a cohesive finale, but there are simply too many narrative moments to combine.

The Invisible Man Appears – and this might come as a surprise to some spectators – is not merely a mystery narrative. Behind the mystery that surrounds the identity of the invisible man lies a romantic conflict, a ‘phallic’ conflict between various men about who can marry Machiko. It would, in fact, not be wrong to state that Machiko is the central object/subject of the narrative.

By underlining the romantic conflict present within the narrative, one can provide a commentary on the central sentence of the narrative: “There is no good or bad in science, but it can be used for bad or good purposes”. What The Invisible Man Appears shows is that the ‘bad’ use of science is either caused by a subjective conflict – i.e. the clashing of romantic desires, or by the thirst for monetary gain. Both elements are – and this is only subtly evoked within the narrative as such – function of the desire to enrich themselves with ‘phallic’ objects, objects, be it a woman or money, that give a man status within the societal field. Some might read The Invisible Man Appears as a subtle criticism against the destructive use of science (i.e. the atom-bomb), but such reading, while not entirely wrong, glosses over the important role that desire/love plays in the narrative.

Other elements that are instrumental in making The Invisible Man Appears, even for the contemporary spectator, engaging and entertaining concerns the musical accompaniment and the practical effects. The music, courtesy of Gorô Nishi, is effective in making tensive scenes truly tensive and strengthening the communicative power of the facial and bodily expressions of the characters. The practical effects remain, after more than sixty years, effective and believable. The very fact that these old practical effects are still able to be so entertaining does not only prove Eiji Tsuburaya’s talent, but also underlines that there is no expiry date for great practical effects. The non-special effects with the invisibility man are, in contrast, lacklustre – obviously, they did not get the same care as the special effects.

The Invisible Man Appears remains, after all these years, a highly entertaining narrative. That Adachi’s mystery sci-fi film can still please the contemporary spectator is a function of the great narrative structure, the pleasing rhythm of the cinematographical composition, the evocative musical accompaniment, and the entertaining special effects.