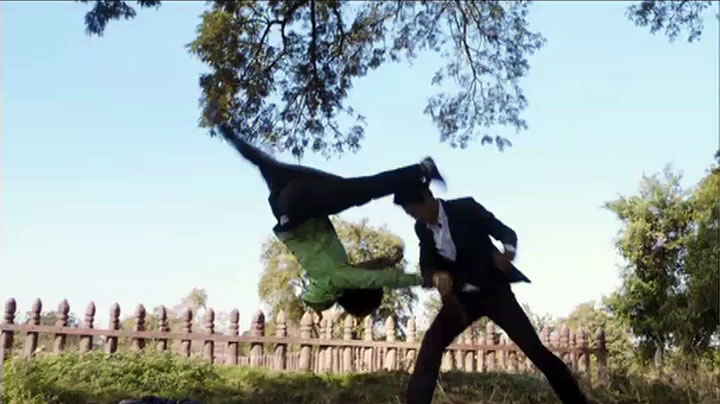 A couple of years on since its original release, it rather feels like The Kick‘s status as a co-production might become common occurrence, although perhaps not between Thailand and South Korea. Director Prachya Pinkaew approaches this auspicious first venture between the two countries rather earnestly; presenting us with a largely pointless title sequence that see’s Moon (played by frequent Kim Ki-duk collaborator Jo Jae-hyeon, Moebius, The Weight, Crocodile, Bad Guy) missing out on Olympic gold in Taekwondo championships due to foul play, as his wife Yoon (Ye Ji-won, Our Sunhi, Nobody’s Daughter Haewon, HaHaHa, Meet Mr. Daddy) achieves hers.

Years later they have taken their family, two boys and a girl to Bangkok, where they’ve set up a Taekwondo gym, struggling to make ends do with exhibition shows. But when they manage to be in the wrong place at the right time, foiling a robbery of a priceless Thai artefact, they become targets for the thieves’ leader Suk Doo’s (Lee Kwang-hoon-I, Queen In-hyun’s Man, The Horse Healer) revenge.

The kids are sent out in the sticks with ‘Uncle Mum’ (Pinkaew regular Petchtai Wongkamlao, once again playing the clowning sidekick) and his niece Wawa (the lovely JeeJa Yanin, Chocolate, Raging Phoenix). Bemoaning the lack of Internet, phone and TV, instead they have to put up with Mum’s misbehaved menagerie including elephants, monkeys and pigs. To his father’s disappointment, eldest son Tae Yang (Na Tae-joo, Hero) is more interested in furthering his K-pop career, attending a Flashdance-style audition that puts the entire family at risk.

Despite the involvement of Lee Jong-suk with script and ‘associate director’ credits, it’s director Prachya Pinkaew who is given creative control. Those who enjoyed Ong-Bak, Warrior King (aka Tom Yum Goong, The Protector) and Chocolate should know what to expect, spectacularly imaginative martial arts with a weak plot and, occasionally, weaker acting. If anything the acting is stronger than usual, though experienced professionals like Jo Jae-hyeon and Ye Ji-won severely overplay their roles from the opening credits.

But then are we taking The Kick too seriously? As with Pinkaew’s previous films, the comedy is played pretty broadly. The family’s Taekwondo exhibition is presented as a complete disaster (really, but they seem so good at martial arts?); and there’s plenty of slapstick in the fight sequences, including one fight in a kitchen that turns into a tribute to musical Stomp, complete with soundtrack. But this lacks the darker edge that made even the Pinkaew-produced Force Of Five inappropriate for younger audiences, with its excessive language and violence. In many respects this is the kids movie that Force Of Five should have been.

So why the 15 Certificate then? Once again I’m more than a little perplexed by the rating given the film by the BBFC. Here is more stylised than realistic, and for my money this seems a lot less violent (not to mention unpleasant) than what we’re presented with in big-budget superhero features like The Wolverine. And yet that only gets a 12A tag? Strange, it almost seems like one rule for Hollywood, another for everywhere else. (And we all know how important it is for blockbusters to reach the highest audience range possible.)

That rating becomes something of a sticking point, as it forces you to access The Kick on adult terms, even if it is a comedy, rather than the kids film it is meant to be. The BBFC’s reasons state ‘Strong violence’, but I rather wonder if it’s more the site of hoodies (even though they are adult) running around with sharp knives?

Fans of Jackie Chan’s earlier films will enjoy the martial arts on display, as director and action choreographer Pinkaew throws in lots of nice touches to the action, such as Tae Yang dance moves and moonwalking, and inventive use of ceiling fans. Tae Yang even manages to end up with Bruce Lee / Enter The Dragon style scratches on his face. A JC-style end credits outtake sequence shows exactly how much the cast threw themselves, quite literally, into the action sequences. It really shows on screen with very little use of CGI, save mainly for enclosures full of crocodiles and ‘live’ octopus.

Yet it’s notable that Pinkaew’s interpretation of Taekwondo mainly comes down to the one note suggested by its title: the high kick, which he uses effectively but far too often. And this hardly measures up to the stuntwork shown on Ong-Bak or Chocolate, let alone the inventiveness of routines such as those in another Pinkaew production Raging Phoenix including jumping stilts.

Surprisingly, regardless of being stuck in a side role with very little dialogue, up and coming martial arts superstar JeeJa Yanin still manages to make quite an impression; gracefully letting her Korean co-stars take the lead. It’s the character of eldest teenage son Tae Yang, played Na Tae-joo, who seems of most interest to the writers and director, and his rather clichéd efforts to make his father proud and perfect the ‘tornado kick’. (That wouldn’t happen in the final skirmish, would it? Ahem.)

He’s easily the least interesting character, and I would have far preferred to see more of the rest of the family, particularly his sister and younger brother; but I guess the bottom line is here that Na is the most proficient in Taekwondo, so it was much easier to rest the majority of the family’s martial arts on his shoulders. Judged as an adult martial art comedy, this film entertaining enough however slight; as a kids film, it’s not bad at all – but the BBFC know best?

The Kick is available on UK DVD from MVM.

Another fairly minimal release from MVM, this also includes the English dubbed version licensed from the US Lionsgate release.

The good news is that if the trailer gallery is to be believed other Lionsgate releases could be on their way from MVM too, including The Sword Identity and Bangkok Assassins.