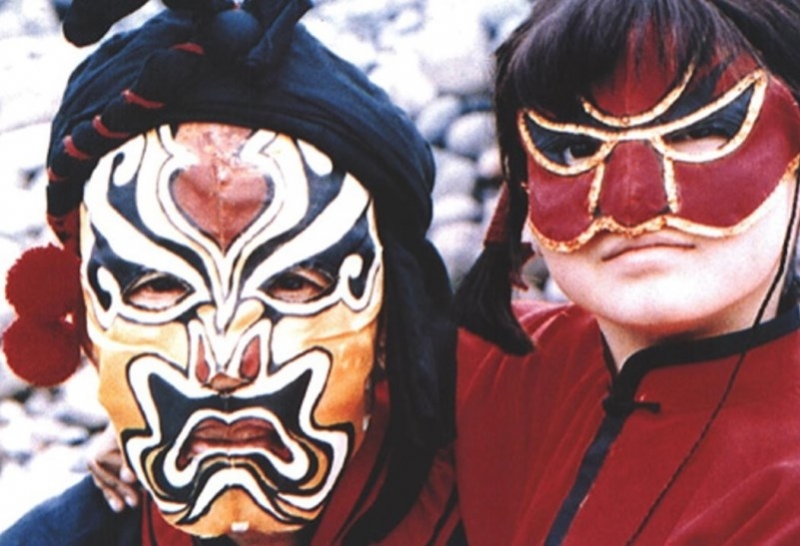 Beautifully crafted, superbly told – surely this is one film that should always be in those ‘Top 100’ movie lists?…

The King Of Masks is just one of those movies. Beautifully shot, heart-rending without being sentimental, it manages to encapsulate real meaning without the necessity to club you around the head with the message – like many Chinese movies, and so unlike Hollywood films. This is simply one of the greatest films ever – so why have so few people heard of it? And why hasn’t it even been released on DVD in the UK?

Set in the 1930s, the story centres around an ageing mask maker and showman, Bianlian Wang (Zhu Xu). With no son to pass on his tradition of mask making and showmanship, he heads to the black market to purchase a male successor to his art. Bianlian is rather pleased with his acquisition ‘Doggie’, and their relationship blossoms – until he discovers that it’s actually a girl, Gou Wa (Zhou Renying). Missing the love and respect that he showed her when he thought she was a boy, something she had never been shown in her life, she rescues a young baby from some unscrupulous kidnappers and presents him to Bianlian. Soon the real parents are reunited with their son, but the King Of Masks stands accused of being a kidnapper and black marketer. Can Gou prove his innocence before he faces the gallows?

Well, you can probably guess how it ends, but it’s impossible not to get swept up with what is in every way a beautifully crafted and well-acted movie. What really makes The King of Masks so special is how it subtlety works on so many levels, managing to look at how women were (and are) treated in Chinese society whilst always being an entertaining story. It neatly draws out the hypocrisy where female religious icons are prayed to, and a star of Peking Opera is adored for his ability to mimic women, yet women themselves are not considered capable of taking on family traditions and crafts? Through a child’s eyes, and anyone with half a brain, of course, this doesn’t make sense.

This pertinent movie also has echoes in the present, and a post-Revolution China that, despite the supposed freedoms offered to women during that time, never gave them equal status. The horrors of the black market in children are, needless to say, nothing compared with those created by China’s one-child policy. It’s an approach echoed by Zhang Yimou in some of his finest (and more political) work, such as films like Not One Less, and many other Chinese filmmakers. A softly softly approach that becomes so much more powerful for not stressing the film’s message overtly.

The performances of both the adult and particularly the child actors are superb; their naturalistic rather than overplayed approach keeps the film from becoming maudlin, despite what could have been a sentimental story. Wu Tian-Ming’s direction nicely frames the story, like Yimou (and more recently Ang Lee), skilfully composed without being showy. The production designs for the period seem authentic and lush, yet reflect the very real grime of poverty.

In fact, it’s really difficult to actually ‘criticise’ this movie. It’s far and away one of the most captivating films of the last couple of decades – a real classic!

King Of Masks is still unavailable on UK DVD, but available to rent and watch on BFI Player.

The Hong Kong DVD available of this film is an okay transfer, but does show a lot of defects from the original print. There are no extras on this DVD.

However, the US (Region 1) NTSC DVD does the film no favours what so ever, reducing the presentation to a pan & scan of an equally poor print. There’s a comparison between some of the available versions of The King Of Masks here.