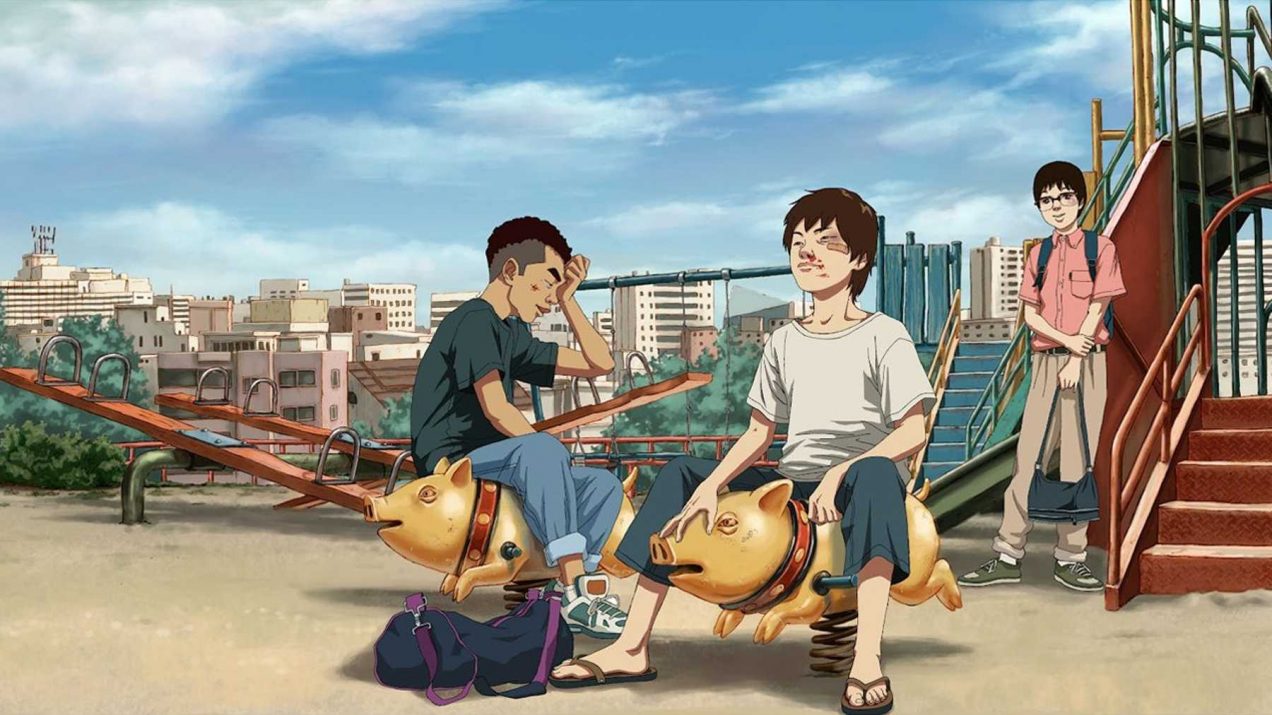 Korean borders have been crossed more than once, its cinema lived happily abroad in all of his shapes and genres. We can easily name a korean horror, a drama, a thriller or even a less successful sci-fi movie, but when we come to south-korean animated features the quest gets complicated. It’s no quantum physics, it’s pretty easy to figure out why we don’t see that much animation coming from Korea, the western world insists to associate kids with cartoons, except when we talk about the more successful and rooted Japanese animes, but 2012 has given us a hint of the change that might happen for the korean animation underworld. We’ve seen the splendid Green Days at the London Korean Film Festival and soon there’ll be The King of Pigs, released by Terracotta, winner of two awards for best debut at the Fantasia Film Festival, and I can assure you, it’s definitely not what Disney has used us to see.

Jong-suk (Kim Kkobbi, The City of Violence, Breathless) and Kyung-min (Park Hee-bon, All About My Wife) are classmates, they’re barely friends and their common enemies, bullies, are the only reason why they hang out together sometimes, mostly discussing of what has been done to them at school. Depressed and near to a nervous breakdown, the unexpected happens and they find a new friend, Chul-yi (Kim Hye-na, Into The Mirror, Café Noir), a violent kid who’s not scared to beat everyone is on his way. None of Chul-yi’s classmates had ever noticed him until he decided to defend Jong-suk and Kyung-min. And that’s how they started to spend the afternoon together, exploring Chul-yi’s disturbed mind: he’s alone, he’s parents have abandoned him to his desire of becoming the evilest person so to avoid bad things to hurt him.

Director Yuen Sang-ho opens his film showing Jong-suk (Yang Ik-june, Our Homeland, Breathless) and Kyung-min’s (Oh Jung-se, Over my dead body, The Unjust, Quick) rotten life as adults. They both are unsatisfied or worse: the first one dreams to be a famous writer, but he can’t succed in his goal and beats his girlfriend while the second one has just killed someone and is constantly obsessed by Chul-yi’s image as The King of Pigs. Life has turned its back on them, and when everything looked like it was going to be the end, they met each other. Sang-ho should have been clearer in the screenplay on why they suddenly decide to meet, why they talk about their lives at school, why Chul-yi and he’s origins are so important in that precise moment of their existence, something that we learn only at the end.

Sang-ho’s vision is terribly cruel, the world is a slaughterhouse where people lives fighting against each other. The concept of a civilized confrontation man to man it’s erased, everything is about animals biting and hitting all they can in order to survive, rage is the only ruler and it leads to a series of dramatic sequences. Who are their parents, where does Chul-yi live, what Jong-suk has to stand everyday and what Kyung-min should become by living in a world designed just for the pleasure of the flesh. The King of Pigs is a tragic story about three unlucky kids left by themselves to crave what was evil inside them.

Unfortunately The King of Pigs lacks in cleverness, a thin important element that would have helped the movie becoming an instant cult, but mostly avoiding its episodic grow: for most of the time it looks like a painting baldy combined with a terrible frame. Prologue and epilogue smell rusty and their forced narrative ruins all of the efforts built in the main picture. Even if It’s just 97 minutes long, it flows quite slowly, concentrating all its energies in a few strong scenes, like the killing of the cat and the meeting between Jong-suk and Chul-yi on the school roof, maybe the best scene of them all.

The King of Pigs is released on UK DVD by Terracotta Distribution.