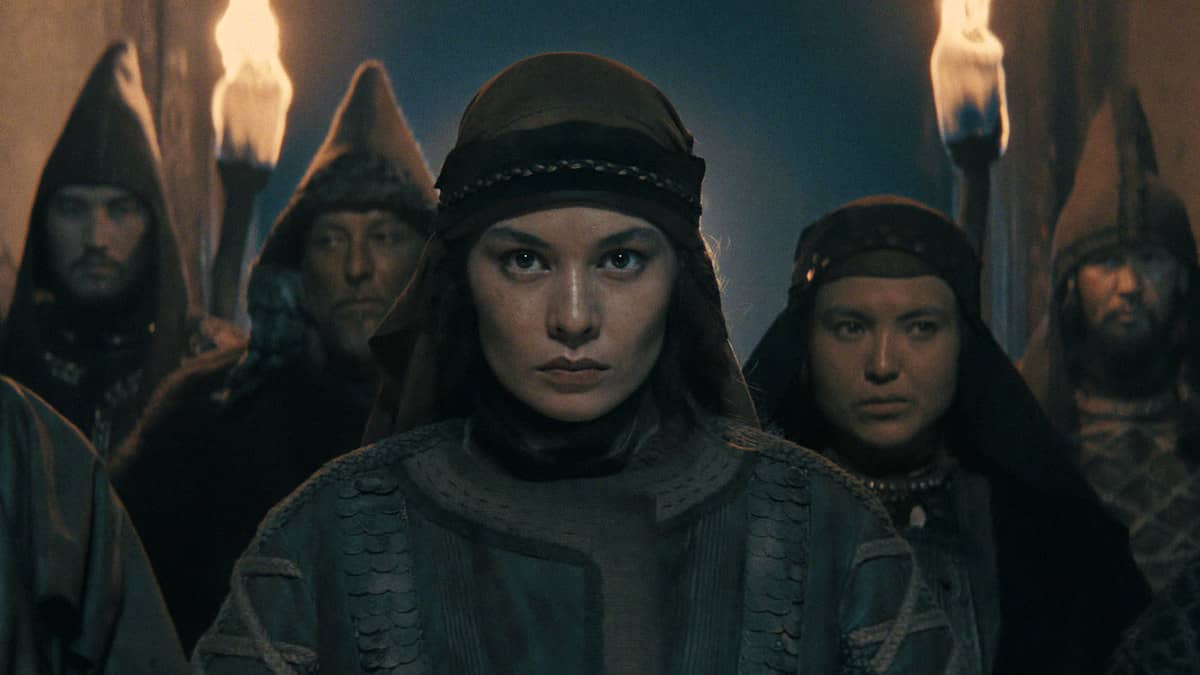 Spectacular historical epic bordering on pure myth, with an ancient historical female figure worth the attention…

The Legend of Tomiris ideally should be seen on as big a screen as possible. And not just at festivals, but at cinema halls and multiplexes worldwide. Currently there is a global pandemic preventing this, of course, but even without, The Legend of Tomiris would probably not receive such a treatment. Despite this historical epic from Kazakhstan being just as spectacular and engaging as its genre brethren from China, India or the United States. With a heroic origin story, large scale battle scenes and a tough female figure at its center, The Legend of Tomiris at least deserves more attention than Disney’s Mulan has been getting recently.

The Legend of Tomiris tells the story of Tomiris, queen of the Massagetae people. Although Tomiris is indeed a historical figure, the tale told here is very much a legend, as the title indicates. Most of what’s known of Tomiris, especially in the west, is that as ruler of the Massagetae she squared off against Cyrus the Great of the Achaemenid Persian empire. And this comes from Herodotus, who is known as the Father of History, but also as the Father of Lies, so well known is his penchant for including inventions and rumours amidst his historical writing.

So, when the filmmakers take the disputed lines by Herodotus and add another layer of myth and fiction to them to make The Legend of Tomiris, can we really be mad about that? Iranian and Kazakh historians certainly were, though their objections to the film were more in the linguistical and cultural realm. Since the Massagetae used to roam in an area that now makes up parts of Iran, Uzbekistan, Turkmenistan and Kazakhstan, many lay claim to their heritage and the heroic figure of Tomiris. Indeed, it seems more likely that the Massagetae would’ve spoken a version of ancient Iranian, as the Iranian characters speak in the film, rather than the ancient version of Kazakh spoken by the main Massagetae characters. But amidst all myth that makes up The Legend of Tomiris, in which the historical record (if you can call it that) only enters the the last third of the story, this feels like a minor quibble – though of course, it’s easy to feel this way, all the way over in Western Europe.

In a pre-Christian, pre-Roman world, the Scythians were the nomadic scourge of settled people. A collection of different nomadic steppe people, known for their dangerous horse archers. The Massagetae were a Scythian people, and as such they were enemies with the settled Khwarezmians. Whose leader conspires with a few minor Massagetae nobles to overthrow the Massagetae king and slaughter his family. His only surviving daughter is a young girl named Tomiris. She spends her childhood years wandering the steppes, following certain story beats one can expect in these types of myths and legends. Eventually, she’s taken in by a tribe of Amazon-like female warriors (no wonder, since wild tales of Scythians were the basis for the Greek legends of the Amazons), who continues her training as a warrior, so that as an adult, she can marry who she chooses and if possible, take revenge on her father’s murderers and take back his throne.

In a feat of look-a-like casting, young Tomiris is played by no less than four different actresses, until the fifth and finally takes over as adult Tomiris in act two and three. She’s played by the impressive Almiri Tursyn, a psychologist who studied acting, horse riding, shooting the bow & arrow and sword fighting to convincingly portray Tomiris as a fierce warrior queen. Who chooses her own destiny and her own husband, by reclaiming her throne, uniting her tribe with the Dahae people (also nomadic steppe warriors, from whose ranks she picks her king), and going to war with the Khwarezmians. All this culminates into the first major large-scale battle sequence, in which Tomiris and her coalition of steppe tribes use as many cunning tactics as fighting prowess to defeat their enemy.

Similar tactics, including a feigned retreat and flanking manoeuvres, are used in the climactic battle against Cyrus the Great. One minor quibble I had with that, is that the Scythians were so hard to beat, as the Huns and Mongols would later be, because of their waves of mounted archers. However, the strategy used in The Legend of Tomiris bears much more resemblance to the way Alexander the Great would defeat the Persians a hundred years later. On the other hand, since nothing is known about this battle except for the outcome, one can’t claim this is entirely inaccurate. Regardless, it is quite a bloody spectacle, as are the earlier big battle and other action scenes throughout the film, which is what really matters. A much as The Legend of Tomiris is more myth than history, it is thoroughly entertainingly so. And this somewhat feminist version of Tomiris, making her own choices and her own way in life, while defying and defeating the men that oppose her, is a welcome change from mostly misogynist historical writing.

The Legend of Tomiris screened as part of the 19th New York Asian Film Festival 2020, and is available now from Well Go USA on US Blu-ray and DVD.

One thought on “The Legend of Tomiris”