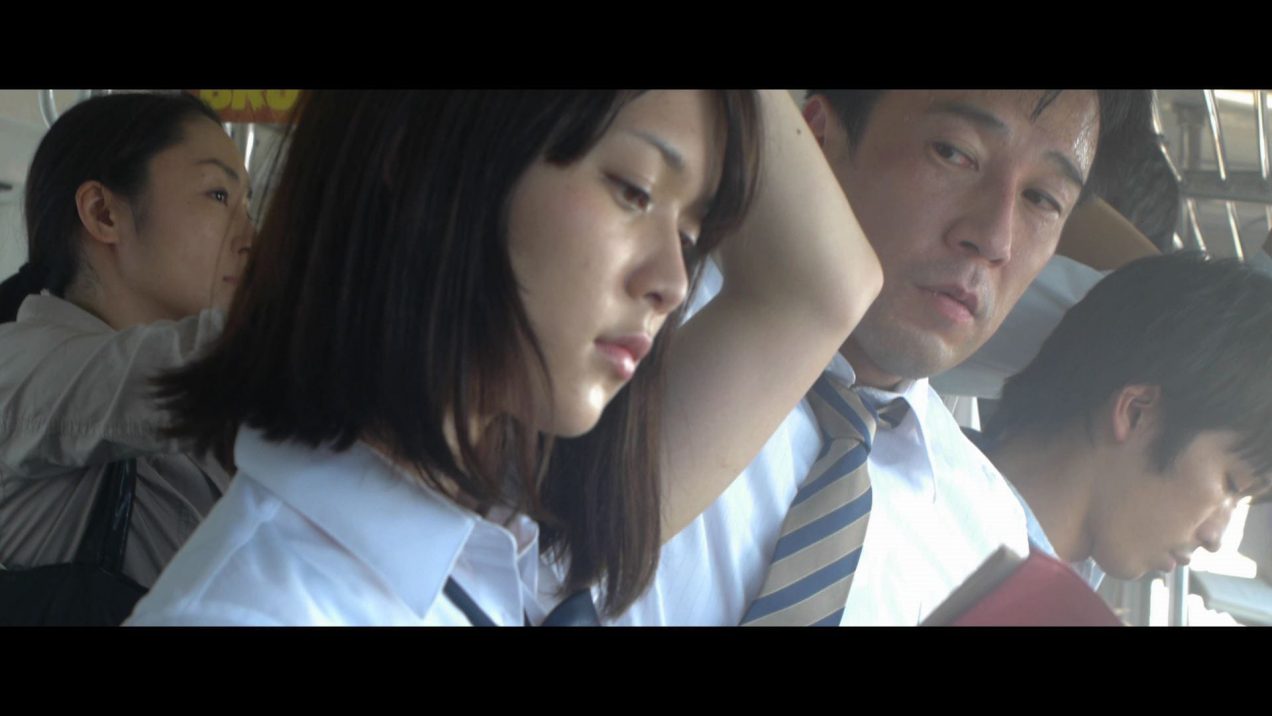 An unsettling short from TWF’s as part of their upcoming New Directors DVD release, focused on the reality of ‘gropers’ on Japanese trains…

The Lust of Angels is one of three short films included on Third Window Films upcoming DVD release ‘New Directors From Japan’, focused on the unsettling surreality of ‘gropers’ aboard certain train lines in Japan and a group of 4 schoolgirls who hunt down these perverts. It’s a shocking thriller that starts pacey and keeps packing surprises, even in it’s short length of 38 minutes, until an unsuspected ending and a ride of contemplation and arising questions along the way.

Saori is on the ride to school, taking the much ill advised Hanagawa Line, when she is molested and embarrassed in public when the molester is caught by another girl. The new student Yuriko (the molester-catching girl) has a killer reputation, and quickly embroils herself with Saori and her two friends, persuading them to hunt down Molester’s on the train after school as if it’s some casual hobby in their small schoolgirl gang akin to a jangly 80s episode of Scooby Doo. As their escapades escalate, the girls find themselves shocked at the actions of one another on the train, and betrayed by their own feelings and other members of the group as they continue to hunt down and attack the perverts in escalating acts of violence. Along the way, the four girls find a nemesis in a group of boys from ‘South High’, an opposing school, who casually contemplate which girl they are going to rape whilst Kosuke (of the boys) secretly has connections with the peculiar Yuriko. What their past is, is never fully explained, however it’s hinted that it somehow involves knowing of the murder of her stepdad (which occurred when Yuriko’s reserved mother egged him to rape her daughter).

When the girls decide who will be the latest decoy for the gropers via Rock, Paper, Scissors; they nonchalantly refer to it as “It’s a piece of cake for Yuriko”, which heralds back to the childish and uncaring attitude towards their own safety the girls hold throughout and the very real dangers the gropers pose towards them. The piece of cake in this instance being the ‘catching’ of the groper through staging a decoy, thus creating a surreal sadistic game with bizarre ‘rewards’ for the girls which is echoes away from the dangers of real life.

The pacing of The Lust of Angels is strange, as whilst the film itself is nothing to cry home about (it’s entrancing, and yet doesn’t stand out as more than a simple narrative) it keeps your interest from start to closing credits whilst succeeding at hardly standing out. Constant twists in the plot are engaging to fan away the turgid lull, and a distinct lack of music asides one standout piece creates an eerie atmosphere (which to the credit of the Director) that enables the film to retain a sense of identity and a simple iconic piece that retains personal to the film. The cinematography is simple, yet captures the action well through a distinct use of close-ups and mid shots that encapsulates the close environment of sexual harassment in busy train carriages and backstreets, furthering the sense of tension in this short thriller that builds upon the simplest of elements for the greatest of effect.

Once her friends discover Saori’s less than noble intentions, it backfires and she is shamefully disgraced in front of the prideful Yuriko. This is just the accumulation of a downwards spiral spawned from the girl’s actions towards hunting these perverts on the train, however when the girls clash over a difference of opinions, whilst catching the same groper that first attacked Saori at the start of the film; we realize that albeit their clashing views, their personal end result is still the same. The girls all crave some form of attention, a creation of individual self worth; and whether that self-regard is found through the sexual attention of strangers drawn to their beauty, or naively hunting the molesters to prove a point of power and dignity, their differences and arguments are similar below the surface. Ultimately, the ending is as brutal as the violent sexual hunting that the girls enact. As Saori states, “you were all waiting to be touched”, it’s just that their reasons for such were different, no matter a similar end result.

The Lust of Angels gets its UK premiere at the Raindance Film Festival on the 28th September with a director Q&A. It also features on Third Window’s limited edition Dual Format release New Directors from Japan, available from 24 November.