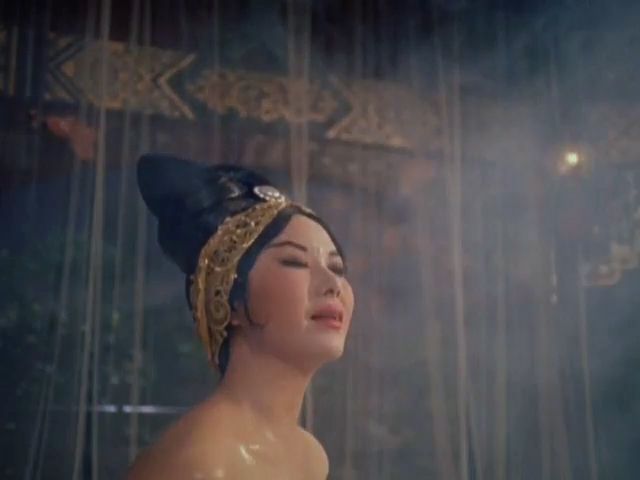 What is best in life? In the weekend it could be something about crushing your enemies while it is a different matter when we jump back to the Sixties when the Shaw Brothers decided to let one of their directors nurture the story of Chinese Princess Yang Kwei-fei. So what was the answer? Colour. Colour played a big part in making Kenji Mizoguchi’s Yokihi an international hit, all thanks to a co-production that involved both Japan and China in a common effort to conquer western audiences.

So, why couldn’t it be the same if they decided to remake the film with their own means? It happened in 1962, Kenji Mizoguchi was in his wonderful sixth year happily lying in his grave, and Li Han Hsiang had already been submitted twice for the Academy Award for Best Foreign Language Film, first with The Kingdom and the Beauty and Enchanting Shadow, with the latter being the only one to make it to the final list of five nominees. What better choice when your intent is getting as much attention as possible from new audiences?

The result outside of Hong Kong was entitled The Magnificent Concubine, a film that can hardly be considered a remake of Mizoguchi’s Yokihi: their point of view is completely different. Obviously the story remains the same; Emperor Ming Xuan Zong spends his days drowning in sadness for the loss of his beloved life, until Yang Kwei-fei, a common peasant, awakens him with her extraordinary beauty. Their love keeps them happy but isolated from the outer world, exploited by her family, now risen to the greatest powerful position desired in China at the time.

Kenji Mizoguchi had eyes only for Yang Kwei-fei, he saw an opportunity to tell the story of a woman and her sacrifice, more or less what he had always done in most of his films. Yokihi lives its life as a love story, a drama centred on a young woman held responsible for men’s crimes. The Magnificent Concubine focuses on a different path. Li Han Hsiang has no real interest in Yang Kwei-fei story, all the major events are told like a mere succession of actions and reactions, what mattered to him were the surroundings, the streets and palaces where it all happened.

Mizoguchi used sets and costumes to embrace his characters, tools used to increase pathos. With Li Han Hsiang’s everything was part of the characters, emperor and concubines were not walking inside the skeleton of a dead kingdom, gardens, halls and rooms feel familiar in The Magnificent Concubine, their steps have no eco, all the sets answer with their silence. And colours too, every set pieces is crafted in the simplest way as possible to be a quickly understandable channel of communication linking Yang Kwei-fei’s fate and the audience. A sort of coral reef.

Tadashi Nishimoto deserves our applauses for The Magnificent Concubine beauty, maybe as much as the director himself. But even if Li Han Hsiang was the one that brought China to Cannes for the three times in three years in the Sixties, it was his cinematographer Nishimoto that gained the very first prize for China at the croisette. The Grand Prix de la Commission Supérieure Technique du Cinema Français was won thanks to the beautiful sets, costumes and, mostly, for its colours.

At the end we have to be fair. We now remember The Magnificent Concubine for the pleasures it gives to our eyes, but something else shined, or we should say someone else: Li Li Hua (Madame Butterfly, China Doll) was a gracious presence that lit the set by herself with her striking performance as Princess Yang Kwei-fei, despite the lack of a well developed screenplay and consequent depth of character she managed to stand out of the crowd. Chun Yen (A Maid from Heaven, A Marriage for Love) had not the same talent, or luck, and the only chance he had to gather anyone’s attention was in the last gloomy minutes of The Magnificent Concubine.

The Magnificent Concubine is available from YesAsia. Many Shaw Brothers films are now available in HD and SD on iTunes, GooglePlay and YouTube. See the full list of Shaw Brothers movies on iTunes here.