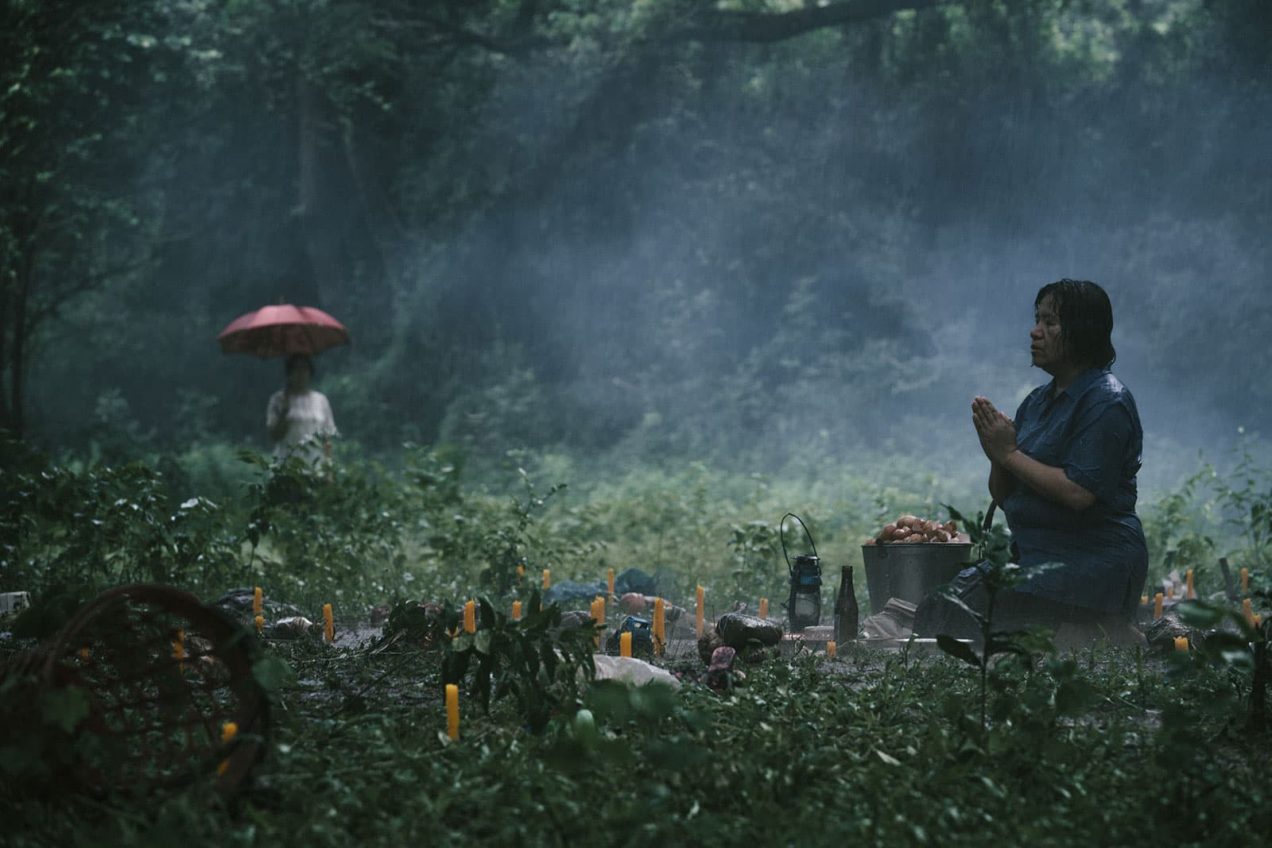 Na Hong-jin (The Wailing) and Banjong Pisanthanakun (Shutter) combine forces, but is it anything new?…

With production and co-writing from Na Hong-jin (The Chaser, The Yellow Sea) and direction from Banjong Pisanthanakun, whose breakthrough hit Shutter brought Thai horror to the attention of international audiences, The Medium comes with a fine pedigree of talent behind it. The film was released in South Korea after appearing at the Bucheon International Fantastic Film Festival where it won Best Feature Film. It screens as part of the BFI London Film Festival 2021 and Beyond Fest 2021, before debuting on streaming platform Shudder the US, Canada, UK, Ireland, Australia, and New Zealand from 14 October.

Falling on similar ground to Na’s own unsettling horror The Wailing, the film takes a mockumentary format, following a shaman in Northern Thailand, Nim (Sawanee Utoomma, The Promise, The Underclass) who believes she is the physical embodiment of benevolent goddess Ba Yan. Nim begins to suspect her niece Mink (Narilya Gulmongkolpech) may be the next in the family line for shamanism, having taken the role herself when her sister Noi (Sirani Yankittikan) refused it. Mink is initially dismissive of the tradition, joking about demon tongues and wondering if there is even a Doraemon shaman. Her increasingly bizarre and dangerous behaviour begins to suggest there are much darker forces at play, while the film crew tag along for the proceedings.

Director Banjong Pisanthanakun presents us with an impressively slow-burn approach, layering the documentary style with a naturalistic and well-observed depiction of the family, complete with history and ructions, as he pulls us in. The performances are solid and believable throughout. As Mink’s actions become more and more extreme, the tension starts to build up, but without going overboard. There’s even a subtle but particularly effective use of effect I won’t go into here for risk of spoiling. Indeed, if it wasn’t for Chatchai Pongprapaphan’s (Wu Xia, Shutter) ground shaking score, we might not even be aware there was anything to fear.

It’s much more straightforward than the battiness of The Wailing, taking more than a few notes from The Exorcist and every possession horror that’s come since, but still enjoyable. The style reflects the documentaries of now, slick with multiple cameras and that knowing artifice in their production. That knowledge that when we see the man on the boat, and then cut to him from the shore with no one beside him, that isn’t the same moment. It’s a whole new set-up. The gorgeousness of Naruphol Chokanapitak’s cinematography is undeniable. But the last act shifts drastically, as the film crew sets up hidden cameras in Mink’s home to watch her behaviour over consecutive nights, all very Paranormal Activity. It shifts again for the final act, as the film crew arrive to monitor a ritual exorcism, and… surprise surprise, things don’t exactly go to plan. Pisanthanakun throws all subtly out the window, and things get very messy.

The slickness of a fully edited documentary and the chaos of found footage don’t exactly gel. The dynamic sound design, which sounds great in a cinema, seems far too sophisticated for the suggested microphone mounted cameras, for one thing. The reportage style of The Blair Witch Project and those that followed, such as Kōji Shiraishi’s brilliant Noroi: The Curse (also currently on Shudder), somehow makes it more believable. What really lets the film down, however, is just how long this last part goes on when audiences can see exactly where this is heading. It feels like a more sudden and opened ended conclusion might have been far more haunting. There’s little here that we might not have seen when Pisanthanakun began his career in 2004. This is a shame, as it would be great to see Thai horror return to the heights it was over a decade ago. It’s perhaps interesting to note that neither Na nor Pisanthanakun have had a major work in five years, with Wailing and enjoyable Japanese travelogue One Day respectively.

Instead, viewers might be best getting their mocumentary hit from both the film and TV series of What We Do In The Shadows, which at least also adds a wry comment or two about which members of the film crew are expendable.

The Medium screens as part of the BFI London Film Festival 2021, before debuting on Shudder from 14 October.

*Note: The subtitles at the LFF press screening had issues which did not benefit the film. A quarter of the alphabet was missing for capital letters, which made some of them close to indecipherable. Additionally, the documentary-style intertitles in Thai were not translated at all. Shudder has been contacted and are addressing the issue, but at the time of publication could not confirm this would be fixed in time for the BFI London Film Festival public screenings.