Qinyuan Lei’s debut is a poetic tale about homecoming…

For people who decide to migrate away from the place they grew up in, creative work is a way to reconnect with what they used to call home. For Berlin-based Qinyuan Lei filmmaking turns into a homecoming since Shenzhen, her hometown, changed and expanded beyond recognition as one of China’s major trade and tech centres. The One Who Runs Away is the Ghost is a very personal account of the experience of disconnectedness from surroundings once so familiar, but interestingly this feeling of estrangement is linked to children’s play. For kids one room can become the entire universe full of mysteries and adventures whereas for adults the whole world might feel too small and grim. By focusing the camera on children, The One Who Runs Away is the Ghost is filled with nostalgic yearning for something lost in the past. She returns as a quiet observer, accompanying the girls playing. Surprisingly, the play of tag cuts to the core of the process of filmmaking as well as homecoming.

The One Who Runs Away is the Ghost revolves around two sisters, 5-year-old Haohao and 8-year-old Zhouzhou, whose parents migrated to Shenzhen just one year earlier and now run a shop on the ninth floor of an electronics market in Shenzhen. The girls spend their whole time playing around the store and exploring the building. The vending machine seems full of secrets locked inside and the roof of the mall becomes a forbidden and transgressive space which is ultimately the edge of the world for the kids. In the voiceover, Qinyuan Lei shares her thoughts and reminiscences on her experiences. She also spent her childhood in an electronics store but always felt the urge to leave Shenzhen. So, who is the ghost in the story?

In “Travelling Light: Of Immigration, Invisible Suitcases, and Gunny Sacks” Rosemary Marangoly George said: “That sentiment accompanying the absence of home – homesickness – can cut two ways: it can be a yearning for the authentic home (situated in the past or in the future) or it can be the recognition of the inauthenticity of all homes. The One Who Runs Away is the Ghost does not focus on homesickness but on the influence the absence of home has on the identity when a sense of emplacement dissolves. At some point moving between countries and spending time in non-places does not have the thrill of adventure and exploration anymore. To some travellers, the pandemic brought a strange realisation that 14 days spent in quarantine might bring more discoveries than years spent wandering. By limiting the cinematic space to the 9th floor of the electronics market, Lei creates a similar effect and tries to grasp the process of this living space turning into a playground. 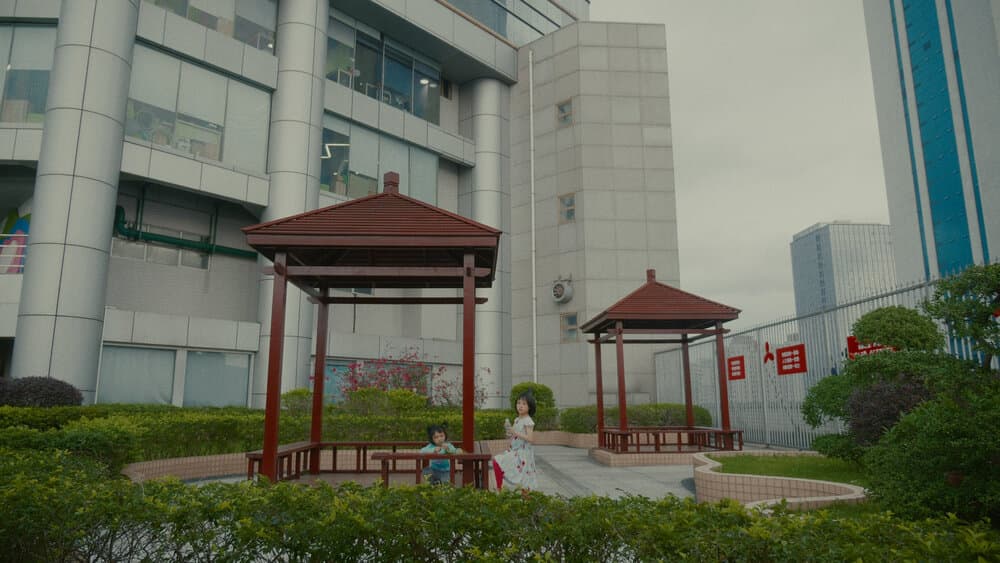 In The One Who Runs Away is the Ghost filmmakers do not interact with the kids, but the two sisters inevitably draw them and the camera into their play. One of their favorite pastimes is playing tag in the more desolate corridors of the mall. In Chinese the game is called 鬼抓人 (gui zhua ren) which can be translated into “ghost catches people”. In one scene, the kids say that the camera is the ghost, implying that it is the cameraman’s turn to chase. The observation mode the filmmakers choose makes them silent participants of the children’s play. Within the film itself, the camera becomes a sort of an imaginary friend that only the kids see but the audience does not, being left only with the voice over. The disembodied presence of the filmmakers turns them into ghosts inside the film narrative. Qinyuan Lei’s personal reflections accompanied the observation from the start, but I keep wondering if that scene is a wink towards other filmmakers behind The One Who Runs Away is the Ghost. The one who held the camera was most probably Julian Moser, the film’s DoP and producer.

In Cantonese, Westerners used to be called 鬼佬 (gweilo), a pejorative term which directly means “ghostly man” but more often is translated into “foreign devil”. Now it is more of an anachronism, now a historically embedded word (it denoted non-Chinese in Hong Kong; therefore, it is closely connected to the city’s colonial past) rather than a serious slur. Here, in the context of the game of “ghost catches people” played in the times of the pandemic, it gains new meaning. Ghosts are ultimate outsiders, beings that are rendered unwelcome and not belonging to this world. Since the pandemic started it seems that China once again turns to isolationism as foreigners are not permitted entry and many non-Chinese residents chose to leave the country. Hopefully, the ones who run away will not always be ghosts.

Qinyuan Lei’s debut is a poetic tale about homecoming, but it leaves out space for so many more interpretations. In The One Who Runs Away is the Ghost living space once again becomes an area of limitless discoveries, but it does not mean the yearning for the outside world is gone. The roof of the electronic market, an area forbidden for the children to play in, is the place the characters (and I’m sure some of the viewers too) long for.

The One Who Runs Away is the Ghost premiered at 2021 The International Documentary Film Festival Amsterdam.