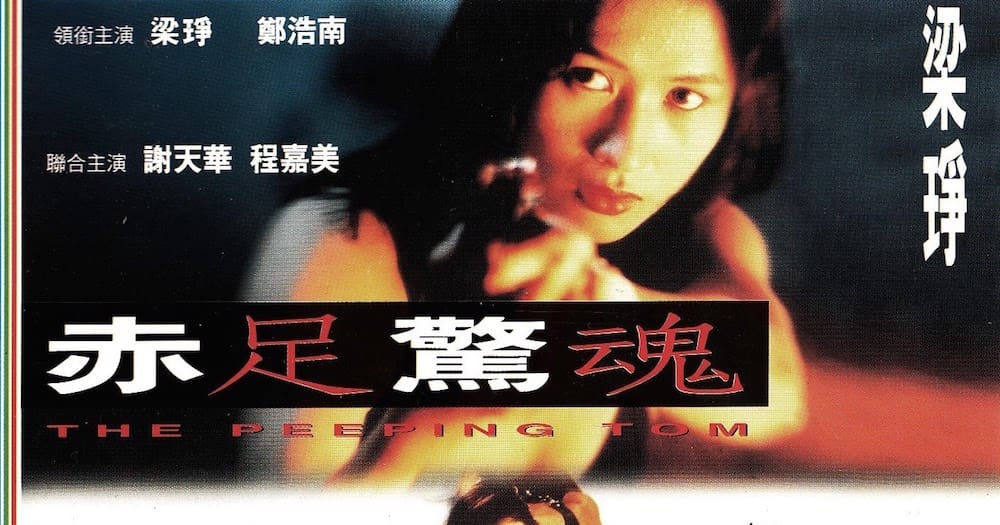 A crazed killer stalks Hong Kong, obsessed with hacking off the legs of beautiful women in this seedy Category III-rated shocker…

The Peeping Tom arrived quite late in the 1990s Hong Kong boom of Category III psycho killer films. With most niches of depravity such as cannibalism, necrophilia, and so on having already been covered by earlier efforts, the filmmakers of Tom were forced to dig deep to give their maniac an original perversion. Full marks then, as they came up with a high concept gimmick that afforded them ample opportunity for both gore and sleaze: a suave lunatic who collects the legs of beautiful women. Whether or not this makes it a good film is another matter, of course.

The plot of The Peeping Tom plays out in the familiar style of a cat and mouse, cops versus psycho story. The cop in question is Cheng Hsuen (played by Jade Leung, from the Black Cat films), who becomes the killer Roy’s (Mark Cheng, A Chinese Torture Chamber Story 2)  unwitting target after he catches her (or more precisely, her legs) on camera during a gun battle. The weirdo boldly enters her life, stalking her at work and hiding out in her home, before eventually kidnapping and assaulting her sister (Miho Nomoto, a Japanese actress who was in the Takashi Miike films Deadly Outlaw: Rekka and Fudoh: The Next Generation). A distraught Hsuen is forced to take the law into her own hands and sets out for justice, using the killer’s infatuation with her legs as bait to lure him in.

Director Ivan Lai is an old hand at Category III films, having been responsible for genre efforts Daughter of Darkness and Ancient Chinese Whorehouse, amongst others, and with The Peeping Tom, the rotten apple doesn’t fall far from the tree. As with most of his works, the film is a fairly random collection of scenes that alternate between soft-core sex and hardcore violence, with many of the “action” scenes being shot in a manner that at best resemble unambitious pornography. This having been said, The Peeping Tom does appear to have a higher budget than most films of its type, and Lai does throw in a couple of car chases and gun battles, though they’re sadly not handled well enough to have any real impact.

Though it clatters along at a fast pace, film has little atmosphere to speak of, and Lai falls back on the tried and tested technique of bathing much of the proceedings in lurid blue or orange light, something which serves no purpose other than to suggest that he was for some reason attempting to stylise a couple of distasteful rape scenes. There is a fair amount of sex on display, including an incredibly long shower scene, though all of it is either clumsy or simply distasteful. The gore is reasonably frequent, though unrealistic, and fans of the genre looking for gruesome splatter will likely feel disappointed, unless they particularly enjoy seeing unconvincing fake limbs being tossed around (which, to be fair, does make for a number of unintentionally hilarious moments).

For better or worse, the film’s plot is absolutely ludicrous and makes little sense. The police seem to have an incredible amount of trouble catching the killer, despite the fact that he strolls into their office, hands over incriminating evidence quite happily, and spends most of the film simply hanging around Hong Kong killing women and drinking copious amounts of Jack Daniel’s. The viewer is given only the flimsiest of motivations for his murder spree, which only adds to the general sense of random madness that pervades the whole seedy affair, and the film is nothing if not incoherent, something which will provide much amusement for a happy few while exasperating most others.

Probably the main point in the film’s favour is that the acting is quite good, and that the female lead for once has more to do than simply shed her clothes and scream. Jade Leung is about as good as the material allows her to be and tries hard to generate some viewer sympathy for her plight, and Miho Nomoto is also appealing in a truly thankless role as Leung’s abused sister. Category III veteran Mark Cheng makes for a vaguely fun villain, and though it’s a shame he didn’t go into full-on pantomime maniac mode, he makes the foolish Roy appropriately sweaty and twitchy.

Overall, there’s not really enough here to make The Peeping Tom anything special or to recommend it to those not already converted to the Category III cause. Though there’s a decent amount of enthusiastic, if incompetent, gore and sleaze, beyond the concept of a leg-obsessed killer, the stands only as a mid-range offering from the prolific Ivan Lai.