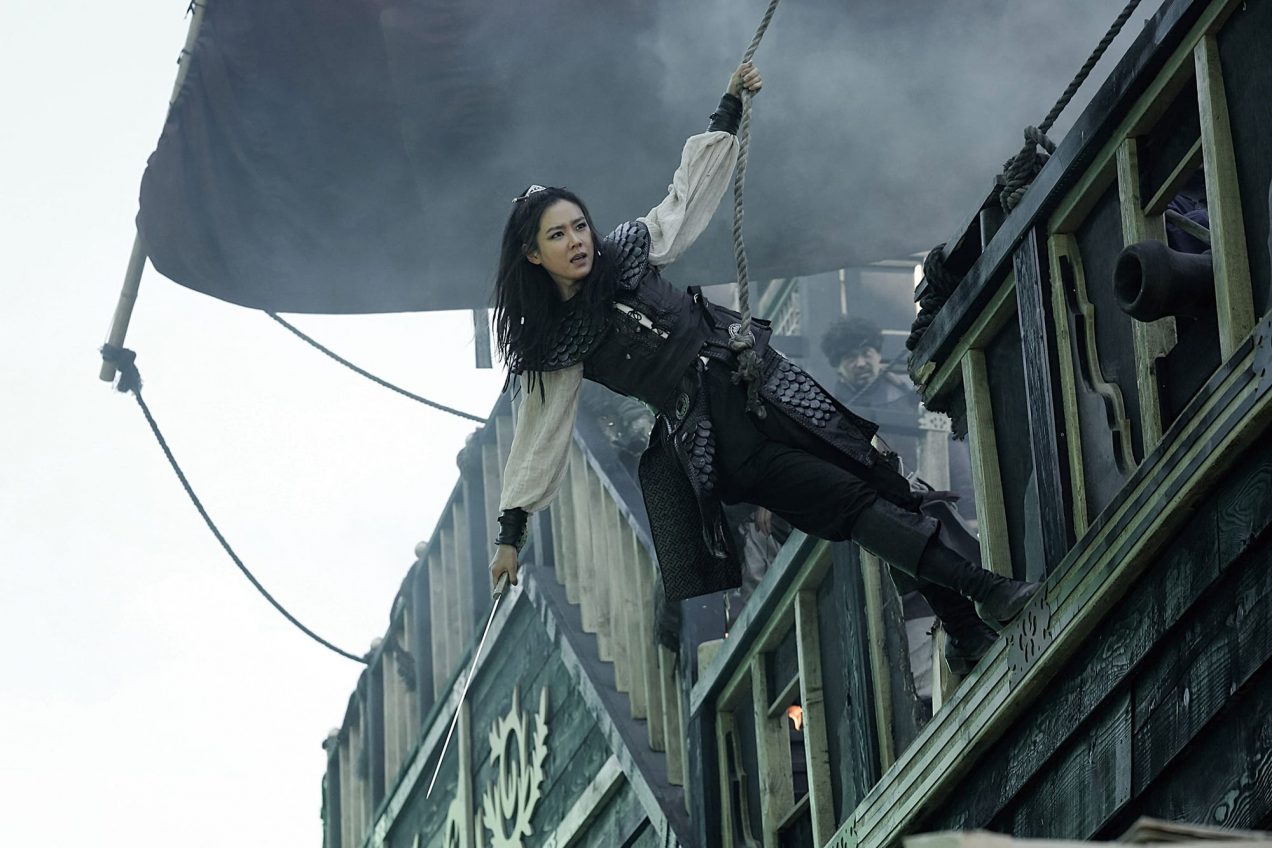 Off the back of the success of Dancing Queen, director Lee Suk-hoon turns his hand to buccaneering action with The Pirates – a film that has been favourably (and unsurprisingly) compared to the Pirates Of The Caribbean series, due on part to a very similar tone of silliness and high adventure.

The literal translation of the original title 해적: 바다로 간 산/Haejeok: Badaro Gan Sanjeok more effectively sums up the plot: “Pirates: Bandits Going to Sea”. Here we find the beautiful Yeo-wol (Son Ye-jin, A Moment To Remember, The Tower, Blood and Ties, looking immaculate in pretty much every scene) as captain of a pirate ship having overthrown her merciless predecessor So-Ma (Lee Kyoung-young, Hwayi, The Berlin File, Kundo : Age of the Rampant, The Terror Live), entrusted by the state and driven by a national duty to hunt down and capture a whale that has, Jonah-style, swallowed the Emperor’s Seal of State on the eve of Joseon Dynasty being founded. (Yes I know, pirates and state do not really sit together, but bear with us.)

Hearing big rewards can be reaped for anyone who can bag that whale, ex-Royal officer Jang Sa-jung (Kim Nam-gil, Handphone, Public Enemy Returns, The Great Queen Seondeok) and his mountain bandits decide to go to sea, despite having no experience on water. Instead they are led by a former shipmate of Yeo-wol, Chul-Bong (Yu Hae-jin, Obsessed, The Flu, Woochi, Tazza: The High Rollers) who is unable to step foot on a boat without suffering seasickness. Inevitably, if somewhat astonishingly, our two leads are destined to clash – but not before the evil and disgraced Royal Guard Mo Hong-Gab (Kim Tae-woo, The Face Reader, Quick, The Coast Guard, Joint Security Area), suitably wearing an eye patch from a wound he sustained from Jang, has engaged So-Ma to settle old debts.

At a certain point last summer in 2014 it appeared that the entire Korean box office had set a course for the high seas. The Admiral: Roaring Currents, The Pirates and Haemoo all debuted at cinemas within weeks of each other. Undoubtedly it came a poignant moment in Korea’s history, considering the tragic events earlier in the year. Intriguingly all films take some inspiration from real life events. Yes, even The Pirates! But if Roaring Currents action-packed reading of the Battle of Myeongnyang was a little hard to take, then director Lee Suk-hoon’s re-writing of the history of National Seal and the reign of King Taejo is ridiculous and entirely unnecessary for such a frivolous endeavour – despite a sterling effort to make actor Lee Dae-yeon a doppelganger for the real Yi Seong-gye’s appearance in the famous painting situated in Gyeonggijeon, Jeonju.

But perhaps that doesn’t really matter. After a fairly dark couple of scenes set some three years previously, Pirates quickly sheds any pretentions on realism for a rollicking yarn of immense proportions, with whales, ship battles, and explosive gigantic water mills. If the CG effects don’t always support the films ambitions, with noticeable edges on actors and some cheap looking effects, then the cast genuinely don’t let that hold them back. With an ensemble any film would be proud of, both tribes of bandits and pirates are filled out with distinctive characters, each given enough screen time to fill out those roles. From Chul-Bong to Monk (Park Chul-Min, Montage, The Concubine), to shipmates Yong-Kap (Shin Jung-Keun, A Hard Day, Masquerade, Secretly Greatly) and Heuk-Myo (K-pop f(x) band member Sulli), all throw themselves into their parts unashamedly.

But if Kim Nam-gil deliberately plays his role with the bumbling and inflated ego pomp of Johnny Depp in Pirates Of The Caribbean –somewhat hard to take as a notorious mountain bandit on the evidence we see here – then Son Ye-jin is more impressive in every sense. Though the predictable romance between the two never really seems to set off fireworks.

The action is reasonably well filmed, though some may take issues with the overuse of ‘adrenaline time’ – slowing down the scene – throughout. Indeed, even with the swashbuckling and adventure it’s the comedy that wins out, with broad laughs coming from lavatorial humour. It’s only occasionally the seriousness of the villains, both Lee Kyoung-young and Kim Tae-woo stealing every scene they appear in, threaten to break through the waggish tone. Lee is, once again, particularly strong in his role of So-Ma, giving him the depth and pathos of a man with his own moral codes, though such depth seems almost redundant in a production like this.

Released just a week after the high sailing Korean box office success that would become Roaring Currents, The Pirates still managed to make the fifth most popular film of the year. Perhaps it’s notable that The Pirates in part shares Roaring Currents nationalistic tone, but that alone does not account for films achievement. More that director Lee Suk-hoon succeeds in exactly what he’s set out to do: creating a fun, larger than life adventure movie that appeals wide audiences, even foreign audiences. As such can be compared to Kundo: Age Of The Rampart, with Korean filmmakers doing exactly what they do so well (if perhaps all too easily). Popcorn fodder? Perhaps. Silly? Well, definitely… But completely enjoyable with it.

This review incorporates elements from a draft review by Kelan Headley.