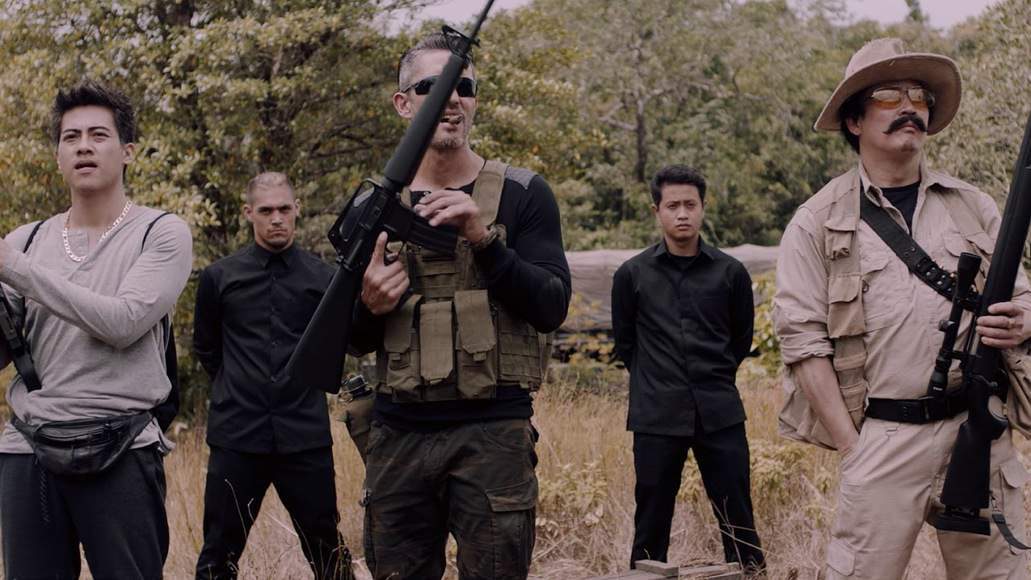 Richard Connell’s 1924 short story The Most Dangerous Game has seen a long list of adaptations over the years, from the 1932 RKO original through to more modern versions like John Woo’s Hollywood debut, Hard Target. The story has essentially remained the same, following rich hunters stalking human prey, and director Jimmy Henderson sticks closely to this with his latest film The Prey, relocating the action to the jungles of Cambodia. The thriller reunites Henderson with the team from his popular hit Jailbreak, and takes the same high-octane approach, packing in the kind of martial arts and gun battles audiences expect from Southeast Asian genre cinema after the success of The Raid.

The film opens with Chinese actor Gu Shangwei as cop Xin, who ends up being arrested by local police while undercover investigating a mobile phone scam ring in Cambodia. Things get even worse when he ends up in a jungle prison lorded over by The Warden (Thai actor Vithaya Pansringarm, Only God Forgives), who runs a sideline business in arranging human hunts for sadistic rich clients. Inevitably, Xin is chosen for the latest excursion, being set loose in the middle of nowhere with a vicious bunch on his tail, including the vicious T (Nophand Boonyai, another Only God Forgives alumnus), forcing him to team with his fellow prisoners to try and survive. Meanwhile, Xin’s colleague detective Li (Dy Sonita, Jailbreak) tries to track him down, only for her to fall into the clutches of The Warden.

The Prey shows again that Jimmy Henderson knows exactly what genre fans are looking for, and as with Jailbreak he here serves up an hour and half of unpretentious action. Whilst there’s nothing original here, the film following the usual Dangerous Game plot to the letter, the fast pace helps distract from this, and aside from a needless late subplot concerning The Warden and a rebel village, it’s tight and tense. The Cambodian setting also gives things a lift, Henderson and cinematographer Lucas Gath getting the most out of the jungle locations, giving the film a sweaty, claustrophobic look and feel, with a number of visually striking moments scattered throughout. The film does have an oddly humorous streak, more so than Jailbreak, though while the soundtrack at certain points really doesn’t work, it does underline the fact that Henderson is clearly aware of the fact that he’s not exactly reinventing the wheel.

The film ticks all the right boxes when it comes to the action, with lots of fight scenes and jungle set pieces, most of them brutal and bloody, booby traps and the odd bit of torture adding to the fun. The choreography is solid, if not up to the level of The Raid, and Gu Shangwei, a five-time national boxing champion turned actor makes for a decent, if one-note protagonist, showing martial arts skills without commanding the screen. The same can’t be said of Vithaya Pansringarm, who dominates the film as the evil warden, turning in an enjoyably over the top performance and seeming to have a fine old time chewing the scenery.

There’s more than enough here to keep fans of bone-crunching Southeast Asian action happy, and though a little by the numbers, The Prey is undemanding fun. Jimmy Henderson and his team continue to make a name for themselves as leading purveyors of Cambodian thrillers, and it’ll be interesting to see whether they expand beyond the genre and into something more ambitious with their next outing.

The Prey opens at US Virtual Cinemas from August 21 2020, with a VOD release from August 25, from Dark Star Pictures.