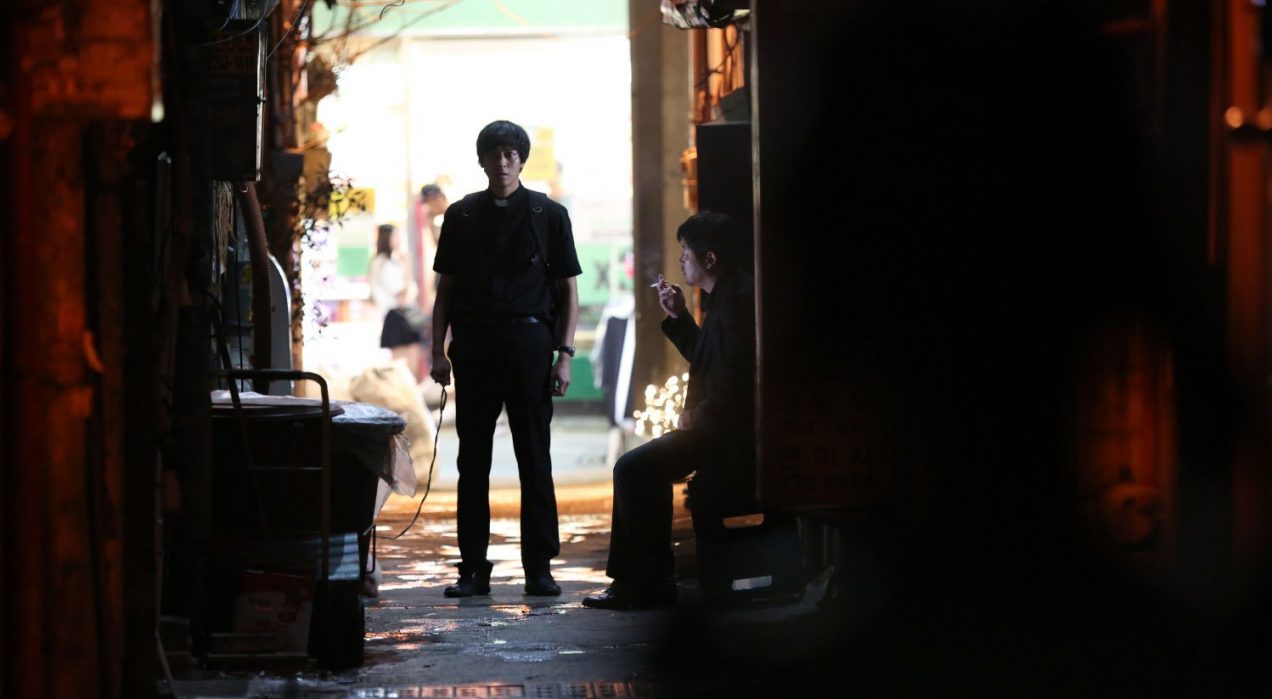 The biggest horror opening in Korean history, Jang Jae-hyun brings us a reinvention of the exorcism horror genre set in modern-day Seoul…

Renegade Catholic priest Kim Bum-Shin (Kim Yun-Seok) has a reputation amongst the Catholic church in South Korea. He’s known as an exorcist, and the destructive behaviour of high-school student Young-Sin (Park So-Dam) is more than enough reason to call him in. The film follows Priest Kim in his search for a new cleric, after his old one suffered from a severe stroke, so in comes the young Deacon Choi (Gang Dong-Won) who volunteers for the position. Following this is the biggest horror spectacle you’ll see in exorcism films, with familiar tropes and skin-crawling rituals abound.

Deacon Choi is a fresh assistant, failing at his college, and is put forward to be the exorcist’s assistant in order to earn him some fresh credits in school. It turns out that reading manga and smoking whilst you’re supposed to instead be behaving at Catholic college can earn you demerits. After the Archdiocese of Seoul concedes that the girl needs exorcising (though states that the Church will ever deny involvement if asked), Choi is carted off on a series of journeys on the way to join Father Kim. He approaches the old assistant who helped Kim, and finds him hospital-bound with a slight air of unease lingering in the room. Choi also orders the Bell of St. Francis specially from Rome, so he can pass safely through the demon forest during the exorcism.

Finally after a meandering but enjoyable middle section of the film, we finally begin building up to the lengthy 30-minute final act. Taking place in the small attic of a back alley building neat the bustling Myeong-dong neighbourhood of Seoul, we enter on the failed ending of an oriental exorcism involving dancing shamans, singing, bell ringing and intricate rituals. We’re given the impression that this is but the latest in a daily rotation of rituals attempting to purify the young girl, however Father Kim has returned with his new assistant. Word sweeps through the building of his horrifying arrival, and with the combination of an earlier scene where priests sneak Deacon Choi a camera (as the high priests are unsure of the authenticity of the exorcism, casting doubt on the…. purity of Father Kim. As nothing says ‘church film’ like old men who might shag kids right?) to film the exorcism ritual. We are given the impression that the ritual is a sham, the real villain all along is Father Kim, and certainly his actions in preceding scenes are evidence enough to sway us in that argument.

The ritual goes ahead, and with it brings a shopping list of Western-exorcism clichés like most audiences will have already seen. Though just because it’s been done before, it doesn’t make it any less riveting, with tight camerawork and howling audio to screw the audience to the screen. Lots of minor, culturally specific details in the exorcism such as a female shaman, and the importance of dates (with Deacon Choi born in the year of the Tiger, or the exorcism beginning on July 15th) only help to elevate that feeling of mysticism, and overall touches to the script that help settle the authenticity in this Korean horror. The last 30 minutes of the film are an absolute horrific romp through genre tropes and new ground alike, and I spent considerable time not only gripping the seat but also watching through my hands. The closing moments are tense, but overall The Priests is a well-crafted Korean exorcism horror, and deserves all the praise that it gets. The two leads have great chemistry, and animosity, whilst the script is packed full of detail that will keep the audience engrossed and constantly thinking. There are probably one too many side-plots, but most of them elevate the action so the handfuls that are unnecessary can be overlooked.

First time writer-director Jang Jae-hyun shot the 108 minute long film The Priests as an expansion of his 2014 short 12th Assistant Deacon, which swamped awards and festivals two years ago. The Priests is a testament to a director who, not only makes great short films, but brings that passion for cinema and narrative to the big screen with a reinvention of the exorcism genre which is not only engaging, but feels brand new, spectacular and superbly frightening.