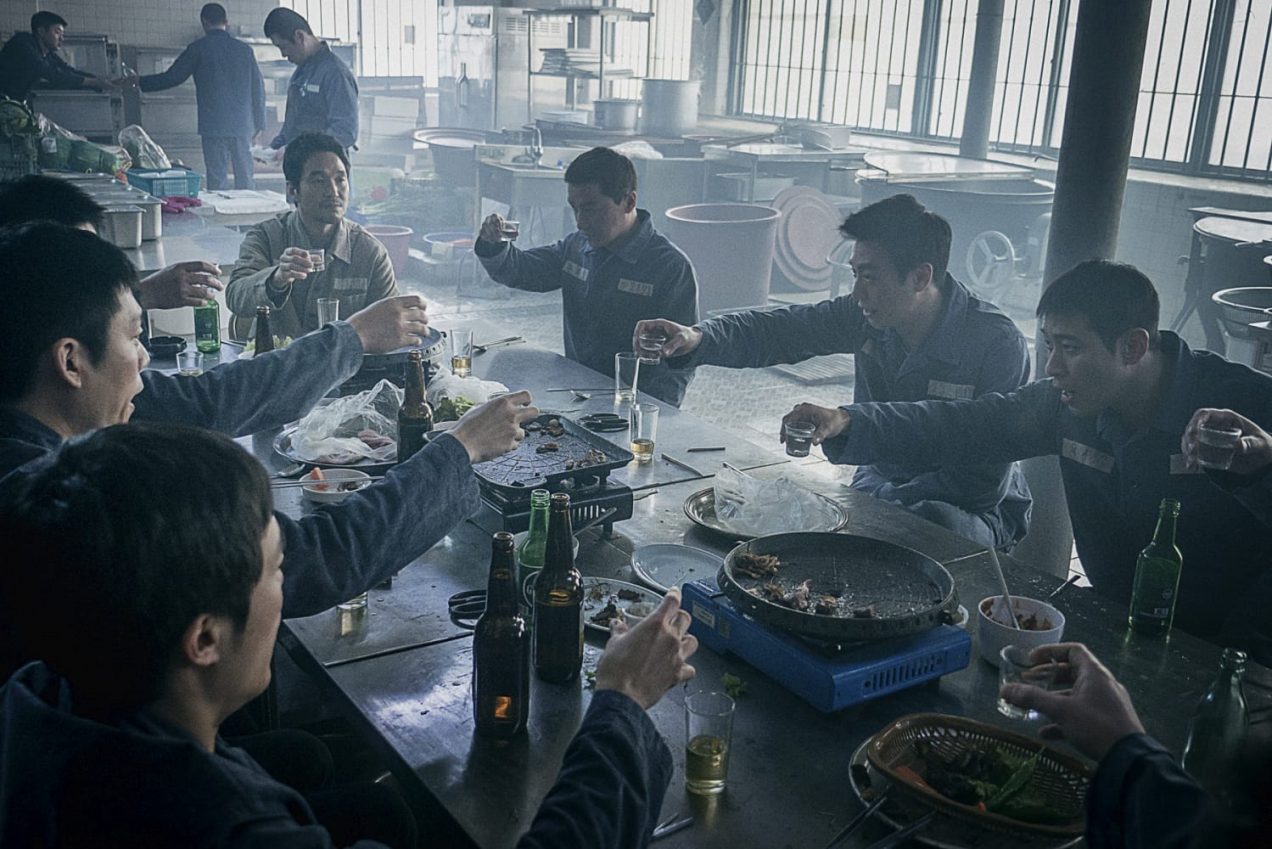 Acclaimed Korean screenwriter Na Hyun, known for his work on the likes of May 18, Forever the Moment and other films, makes his directorial debut with The Prison. As its title suggests, the film is set largely in a jail, with Kim Rae-won (Gangnam Blues) as a cop who ends up behind bars, where he encounters a particularly powerful inmate played by Han Suk-kyu (The Royal Tailor). The film enjoyed a lot of buzz during its production, having apparently been pre-sold to over 60 territories around the world, before going on to screen at the Brussels International Fantastic Film Festival and the Far East Film Festival in Udine.

The film opens with Kim Rae-won as Song Yoo-gun, a cop known for his tough and brutal methods, being sent to jail after a hit and run accident. Unsurprisingly, he doesn’t exactly receive a warm welcome, being set upon and beaten both by the guards and a number of his former collars, the warden (Jung Woong-in, Time Renegades) making it clear he’s not sympathetic to Song’s plight. Soon enough, he catches the attention of Jung Ik-ho (Han Suk-kyu), an inmate who rules the prison, pulling the strings and generally treating it like his own kingdom. Jung turns out to be part of a clandestine conspiracy which involves prisoners being let out at night to commit crimes to further the interests of a mysterious organisation, and he takes Song under his wing, impressed by his fighting skills and ruthlessness.

It’s easy to see why The Prison has earned itself a high profile, as it ticks all the right boxes for a handsomely-budgeted, hard-edged Korean thriller, with a high-concept premise, slick production values, macho shouty acting and plenty of violent action. Na Hyun proves confident behind the camera, and the film rattles along at a fast pace, its set pieces all being well-choreographed and brutal – things do get very nasty in places, Jung Ik-ho having a penchant for torture, including scooping out and eating the eyes of victims. It’s all very tense and thrilling, and Na does a good job of escalating things throughout, making fine use of the prison set, adding an air of claustrophobia and keeping the characters trapped in with each other, the threat of carnage never far away. Although not the biggest of stars, Kim Rae-won and Han Suk-kyu are great value for money in the lead roles, both showing real screen presence and having a fine time yelling at each other in uber-manly fashion.

Given Na’s previous experience as a wordsmith, it’s perhaps surprising that where The Prison falls down somewhat is through a weak and leaky script which never manages to convince or to add any kind of depth. Though the basic setup is an interesting, if familiar one, the drama and suspense is seriously undermined by the fact that it’s clear from the start that there’s a twist coming regarding why Song is behind bars, so much so that when finally revealed, it’s hard to tell whether it’s supposed to come as a shock or not. Na wastes a great deal of time on this, making the film somewhat confusing in places, and it would have been far more effective if he’d gotten this out of the way early on and putting the focus on the characters and their shifting power-struggle of a relationship instead. It doesn’t help that some of the later developments lack sense and are scarcely credible – while Korean cinema is known for its tales of corruption and of conspiracies run by sinister authority figures, the idea of criminals being let out of jail to commit crimes, without there being any concerted effort to cover this up, isn’t even remotely believable. Jung’s running of the prison similarly requires a major suspension of disbelief, and Na never bothers to the kind of provide context or plausible detail which might have lifted the film above its admittedly fun, though essentially daft premise.

This isn’t to say that The Prison isn’t a perfectly decent popcorn flick despite its narrative flaws, and there’s enough here to make it entertaining throughout. Although Na Hyun might have been expected to make something a little more substantial for his debut, or at least something feasible, it’s nevertheless am above average offering, and it’ll be interesting to see what he tries his hand at next.

The Prison is available from YesAsia.

One thought on “The Prison”