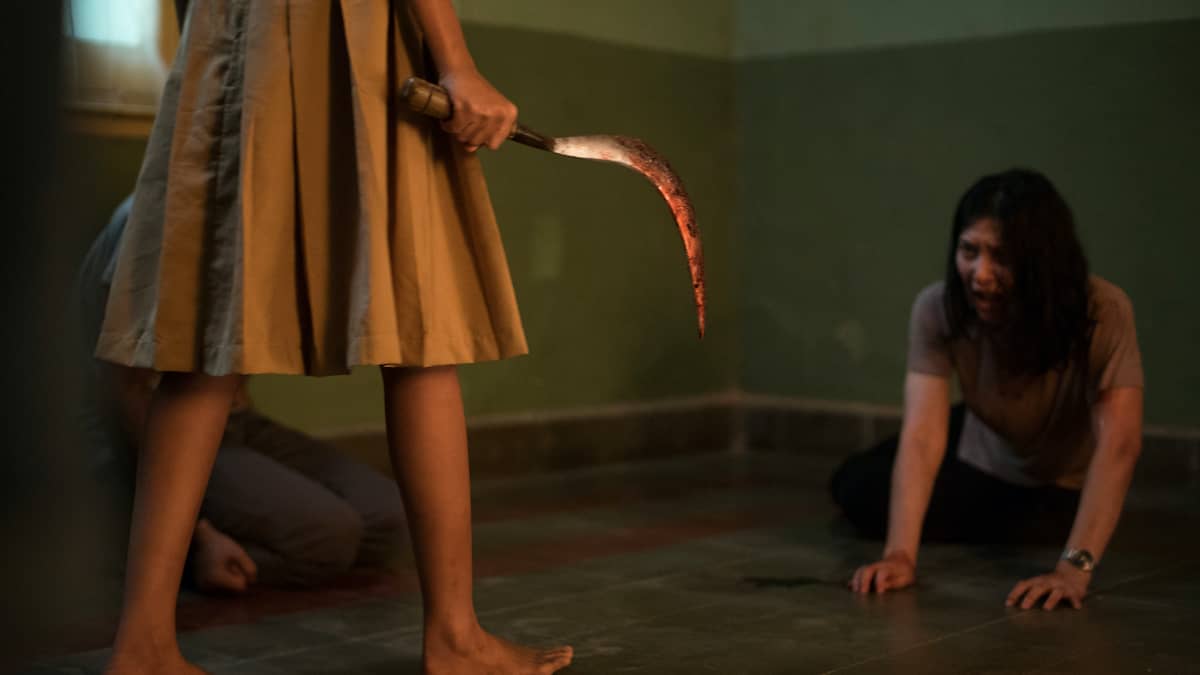 Indonesian black magic horror is currently very much on the hotlist, with the likes of May the Devil Take You and its sequel, Satan’s Slaves, Impetigore and others reaching a wider western audience than they might otherwise have done thanks to the streaming service Shudder. The platform adds another in the malevolent form of The Queen of Black Magic, originally released in Indonesia in 2019, written and produced by the country’s ubiquitous genre magnate Joko Anwar and directed by Kimo Stamboel, one half of the Mo Brothers and well known for dark and violent fare.

Like Satan’s Slaves, the film is a new take on an older Indonesian shrieker of the same name, and opens with a man called Hanif (Ario Bayu), his wife Nadya (Hannah Al Rashid) and their children heading to the countryside to visit the orphanage where he grew up. On arrival he meets with old childhood friends Anton (Tanta Ginting) and Jefri (Miller Khan), the three of them having come to say their goodbyes to the gravely ill orphanage director who raised them, Mr. Bandi (Yayu A.W. Unru). It doesn’t take long for them to realise that something sinister is afoot, and as the horrific secrets of the past are revealed, the visitors are bedevilled by an evil presence.

Clearly there’s nothing new about the plot of The Queen of Black Magic, and the film plays out exactly as expected, with none of the skeletons which come tumbling out its many closest being much of a surprise, even for those unfamiliar with the genre. The film resembles May the Devil Take You and Impetigore very closely, Kimo Stamboel going for the same slow-burn atmosphere and gradual build up to a more visceral final act, without a great deal happening during the first hour or so. Queen is certainly a film which requires a bit of effort, and some genre fans may find themselves a little bored during its opening stages, as Kimo really does take his time in getting to the gory goods – the titular queen isn’t referred to until a fair way through the film, and even after this doesn’t get involved until later.

Still, for patient viewers there are a few flashes of effective creepiness to be savoured during the slow first hour, and in its favour the film is at least a touch shorter than most of its peers, meaning that there’s not quite as long to wait before things erupt into carnage. Thankfully, the last half hour really is worth waiting for, with Kimo really going full Hong Kong Category III style as curse suddenly kicks in, and the film shifts gears impressively, picking up its pace and packing in an outstanding amount of Gong Tau black magic sadism and madness, from insect and entail vomiting through to torture and decapitation. While none of this particularly makes sense, Kimo does a great job of plunging the film into gross-out territory, the involvement of the vaguely endearing child members of the cast making it all the more shocking – viewers lulled into a sense of security by the film’s first two acts may well find their jaws on the floor before the end.

This itself is enough to make The Queen of Black Magic a solid recommendation for fans of old school Asian black magic horror, and it wins extra points for really going pedal to the metal as it hurtles towards its nasty conclusion. While the first hour is a bit of an endurance test, it’s no different to other recent Indonesian dark sorcery shockers in this regard, and is up there with Impetigore as one of the best of its kind of the last couple of years.

The Queen of Black Magic is available to stream on Shudder now. Join us every Thursday for the latest in James’ #cineXtremes series.