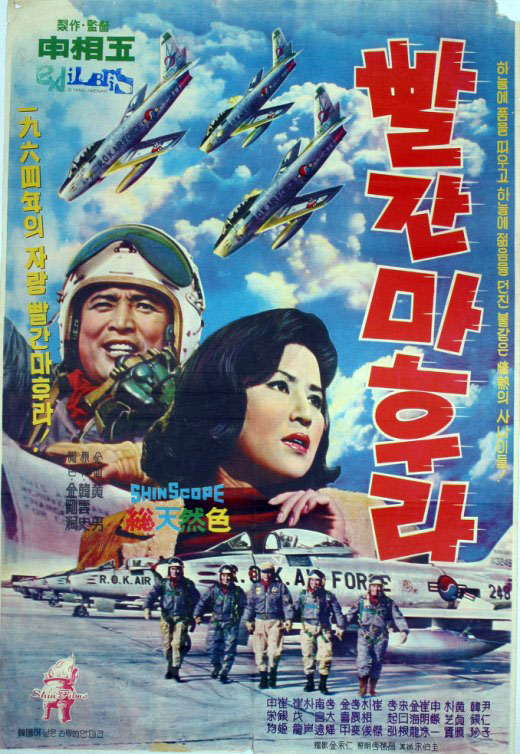 Part of the London Korean Film Festival’s strand on The Korean War on film, we look at the inspiration for R2B: Return To Base…

With so many new films to choose from, it was heartening to see an archive strand included with the London Korean Film Festival 2013; allowing audiences to experience films from a different era in Korean cinema, though arguably one much more influenced by American cinema. Curated by Dr. Mark Morris, the short season looked at chief examples of films on the Korean War as seen through the eyes of Korea filmmakers.

The first, and easily most glossy of these films, comes from noted director Shin Sang-ok. Prolific in the 60s he made some of the most iconic Korean films of that time, but much of his work is overshadowed by his life own story, proof that truth really is stranger than fiction. He is famous for being kidnapped in the late 1970s by Kim Jong-il and taken to North Korea, where he was forced to make films like Godzilla-style monster pic Pulgasari. (Why no one has turned this into a biopic yet is beyond me.)

Shin’s film The Red Scarf follows a daring unit of fighter pilots in their lives both in the air on the ground. Towards the end of the conflict in 1952, a cocky new pilot joins the team, Bae Dae-jong (Choi Moo-ryong) who quickly makes an impression on their leader, Major Na ‘Wild Boar’ Kwon-Joong (Shin Young-Gyun), by bringing in his jet without landing gear. A familiar trope of such films, Bae and Na are known by nicknames Sissy (slightly unfortunate) and Boar, while teammates have names like Pebbles and Lugger.

As their friendship grows, Na remembers his former colleague Lt No DoSun, who fell in love with a girl they both met one day in nearby Kangrueng, Ji-Sun (played by Shin’s wife Choi Eun-Hee). As there romance blossoms, a dangerous mission sees him killed and Na charged with being the bearer of bad news.

Na watches on helplessly while Ji-Sun’s world collapses, sweet on her himself since they first met. In something of an Asian troupe, he notices some of the same qualities that No had in his new teammate Bae, and effectively plays matchmaker to bring them together so she can be happy again.

On a mission to destroy a strategic bridge that even the US forces failed to blow up, Bae gets caught behind enemy lines. Na decides to stop at nothing to ensure history does not repeat itself, but the greatest sacrifice is yet to come.

Morris notes that the Americans (and UN forces) are all but completely absent from these films, and yet Americanisms are not. The cultural impact of America and the West can be felt everywhere, from the celebration of Christmas – a relatively new addition to Korea, but here played out for sentimentality in the same way you’d find in a Hollywood movie (even the song White Christmas is prevalent) – to the magazines on newsstands, like Mad. (Factual side note, though Mad magazine existed in 1952, it wasn’t yet a magazine per se but a comic book until 1955.)

The biggest influence, of course, is American war films. At this point Korean films on the Korean War films borrow liberally from American films from the previous decade; both from films on the Pacific war and the Korean War itself, which preoccupied filmmakers in the early and mid 50s. One of the major influences coming from The Bridges at Toko-Ri (1954), which contrasted family life against a U.S. Navy fighter pilot mission to blow up a strategic bridge.

Much like those American films, here the enemy is largely a faceless, unsympathetic foe. Only at one point does it touch upon the complexities of this war between countrymen, when one of the characters targets artillery hidden in a village as he reveals that it was his hometown. (Even if filmmakers had wanted to portray North Koreans differently, their worked might have ended up banned by the Anti-Communist Act, as Lee Kang-Cheon’s Piagol was a decade before.)

Morris also notes, however, that there is one considerable difference in Korean War films to their American counterparts, at least until Vietnam War films: there is no decisive victory to celebrate. This leaves a gapping hole where dramatically we are used to seeing the value, or at least some recognition, in the sacrifices our heroes have made. Perhaps the most emotional scene in the film comes when the mother of one of the pilots comes to see her son, only to find he died earlier that day. Here where normally solace could be taken that at least the conflict had ended, there’s a nagging, almost desperate felling that it has not.

Technically director Shin Sang-ok shows himself to be brilliant. The film, largely restored to its original glory by the Korean Film Archive, has a high production value (shot in ‘ShinScope’, no less); with cinematography from Jeong Hae-jun that takes full advantage of the widescreen, and solid editing by Yang Seong-ran throughout.

But it’s in the aerial photography that the film really excels. With the full assistance of the Republic Of Korea Air Force, the fighter pilot scenes in the air are fast-paced and as exciting as you could possibly expect of the time. This isn’t the grainy stock footage you often see wheeled out in war films. Of course, as Morris points out, in truth the Korean forces had propeller planes at the time, not the jet planes we see.

(I’d like to know if the rescue is how this really worked at the time. Essentially the parachuted pilot sets up a washing line to catch a hook from the rescue plane. Really? Come on, really?)

As such the film rather serves as a propaganda piece, implying that the R.O.K. Air Force are still keeping South Korea safe from the very real threat from the North. On the ground, however, the characters seem rather stilted and simplistic; meaning they are not as engaging as they need to be to make you concerned about them coming back. Only Shin Young-Gyun as Major Na really stands out playing quite an ebullient, larger than life character.

The film won numerous awards at the Asia-Pacific Film Festival, Blue Dragon and Grand Bell Awards, and was the first South Korean film to be released nationally in Japan. Perhaps the most dubious honour was that it became the inspiration for R2B: Return To Base, which played at the London Korean Film Festival in 2012. The films share a spotlight on the ground crew, though R2B adds several 80s clichés rock video (particularly of the mid-80s, Tony Scott Top Gun kind – though it shares the same Cold War inspired ‘Gung-ho’ patriotism), while the former film has a distinct lack of lead stars in baby oil (which may disappoint at least one fellow critic 🙂 ).

Perhaps most disappointingly, R2B serves the same function as the original Red Scarf, little more than a recruitment film for the Air Force, the North Korean threat is just as faceless. You might have hoped we’d come further than that.

The Red Scarf played as part of The Korean War strand at the 8th London Korean Film Festival 2013.