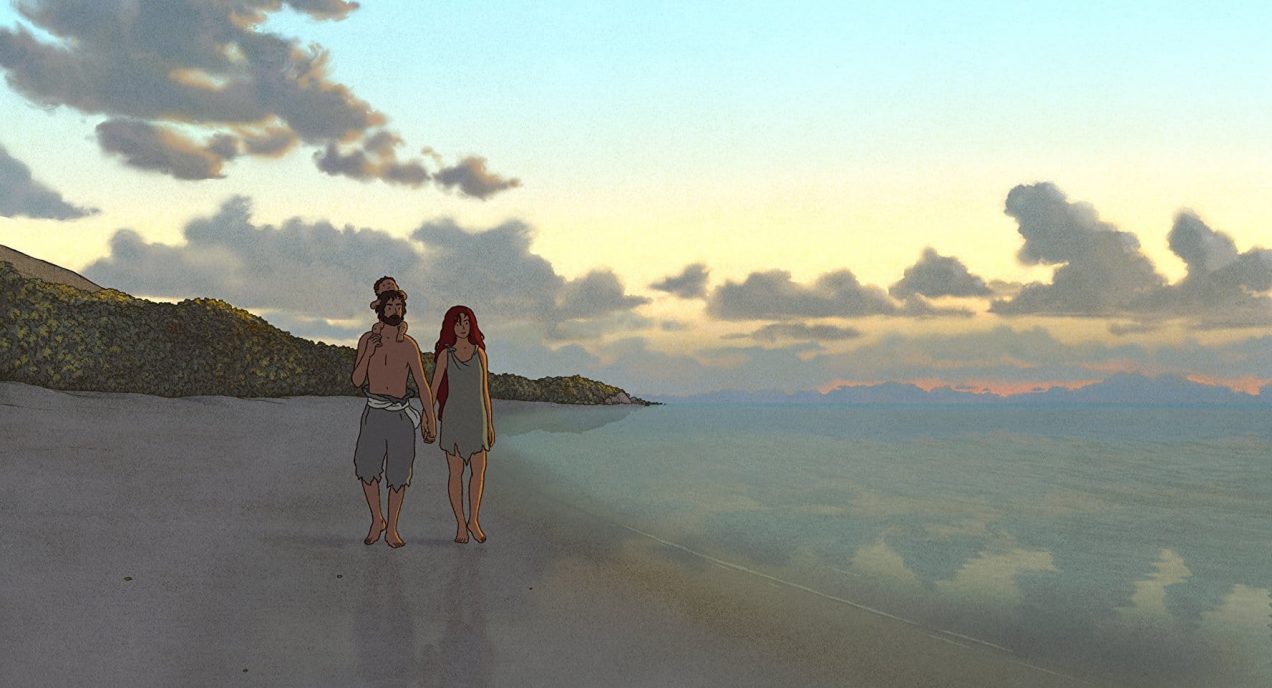 A shipwrecked man, a turtle, and a mysterious woman star in this quiet and dreamlike fantasy…

The Red Turtle is animation at its purest. There is no dialogue, a stripped-back soundtrack, and very few plot points. Rather, this collaboration between French studio Why Not Productions and Japan’s Studio Ghibli is a beautiful fairy tale told entirely through its characters’ movements. Director Michaël Dudok de Wit and producers Toshio Suzuki and Isao Takahata deliver a heartbreaking meditation on love, forgiveness, and perseverance, all without the use of a single spoken word.

In the midst of a murderous storm, a young sailor is tossed onto the shore of a small island, seemingly lost to the world. He spends the next few days exploring his new prison, before making his first attempt at escape. The film then begins its slide towards the magical when he meets the titular red turtle, which seems intent to keep him upon the island. Later, a woman with hair like fire and an adventurous little boy fill out the rest of the small and lovable cast as they attempt to survive and make a family for themselves in their secluded world.

Despite its simple plot, The Red Turtle is devastatingly powerful. From our hero’s tortured longing for freedom to the simple joys of the family he eventually creates, he is completely empathetic and relatable. However, his story dips into rather dark territory at times, so it perhaps best suited for older audiences. Though he is silent, we come to know the sailor through the incredible animation from Why Not Productions and Studio Ghibli. Their work shines in his every one of his realistic movements. Without ever knowing his voice, the audience comes to build a bond with him, which makes his brushes with drowning or starvation all the more nerve-wracking.

The wonderful animation extends to every aspect of the story, from the mischievous thievery of the ever-present crabs accompanying our hero to the slow grace of the mysterious turtle. It is as colourful as one would expect a Studio Ghibli release to be, but it is a far cry from the lush vibrancy of Hayao Miyazaki’s titles. The Red Turtle’s visuals share more with Takahata’s The Tale of Princess Kaguya than Spirited Away or Princess Mononoke. Interestingly, colour comes and goes from the world, especially during the hazy and monochromatic dream segments.

Composer Laurent Perez Del Mar contributes a suitably subdued and dreamlike accompaniment to the film. The mostly ambient tracks blend in with birdsong and crickets of the island, rarely swelling to orchestral symphonies. They softly and sweetly carry our hero along through hurricane, hallucination, and hopelessness.

The potential for boredom is gracefully averted by the film’s tight 80-minute runtime. Despite slow and quiet scenes of gathering food or building rafts, there is a wonderfully compelling forward momentum here. The reverie that unfolds in the latter half is especially good at propelling us forward to an achingly tender conclusion.

The Red Turtle is an exciting development for animation in its mixture of survival, romance, and slice-of-life storytelling. Poetic and peaceful, it is the type of film to linger in the hearts of its audience. It is a promising first feature for its director, who was deservingly nominated for an Academy Award for Best Animated Feature upon its 2016 release. Hopefully, Studio Ghibli will continue to reach out to other studios around the globe to produce more unique projects like this one in the future.