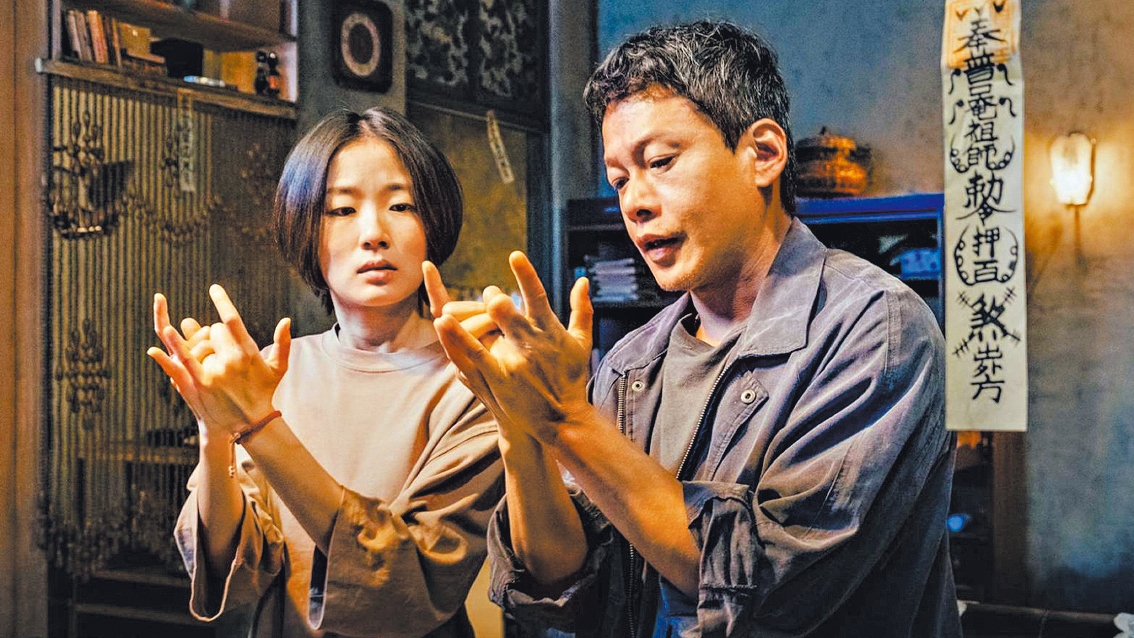 Likely as a result of the squeeze on new content due to the COVID pandemic, 2020 has seen a rise in the number of films from around Asia appearing on international streaming platforms, with Netflix in particular picking up a fair few titles. Taiwan has proved an increasingly happy hunting ground, with films like Secrets in the Hot Spring, A Sun, Your Name Engraved Herein and The Bridge Curse all having appeared recently, now joined by supernatural horror The Rope Curse 2. Directed by Liao Shih-han, the film is a follow up to his popular 2018 original, and stars Wilson Hsu (also in Liao’s 2019 drama The Paradise) and Tsai Ming-liang regular Lee Kang-sheng who won praise in 2020 for a very different role in the acclaimed director’s Days.

After opening with a product placement warning and handy bit of info about Thai black magic and the demonic entity at the heart of the titular curse, the film gets down to business, following a young orphaned woman called Jia-min (Wilson Hsu) who has the ability to see ghosts. After her uncle is killed by a rope curse connected to a ritual performed by Thai drug dealers, Jia-min’s aunt (Vera Chen, The Tenants Downstairs) is possessed by the demon and starts to behave alarmingly, ending up in hospital. Events see Jia-min’s path crossing with that of Huo-ge (Lee Kang-sheng), a washed-up exorcist whose master died several years back trying to undo the curse, and despite his initial reluctance he agrees to help her save her aunt.

Probably the main initial issue here is whether or not potential viewers need to have seen The Rope Curse before checking out the sequel, though since there doesn’t appear to be much connecting them aside from similar themes, it’s not really a problem. What does help is an interest in Taoist and black magic customs and costumes, as this is very much the focus of the film, Liao Shih-han showing great attention to detail in painstakingly bringing them to the screen. While having Curse in the title might suggest a traditional modern ghost horror in the manner of recent compatriot The Bridge Curse, the film is a much slower and more thoughtful affair, with long sequences dedicated to rituals and their trappings. The emphasis is firmly on atmosphere rather than scares, and while Liao does a good job of giving the film a creepy look, with lots of lurid colours and shadows, this might disappoint anyone looking for more lively terrors. Things do shift gears a bit during the final act, though the sudden injection of computer effects feels out of place rather than impressive, and doesn’t really add much.

Liao is similarly more concerned with the film’s dramatic elements than with actually frightening the viewer, and it quite quickly gets dragged down by an overabundance of subplots, following Jia-min and her aunt, Huo-ge and his struggles with guilt and alcoholism, a police investigation into the drug dealers, and more. It’s all a bit overstretched and muddled, especially since it’s obvious from early on that Jia-min and Huo-ge will end up coming together to fight the demon, with matters not helped by a sluggish pace. This isn’t the fault of the cast, with Wilson Hsu passable as the tormented Jia-min and Lee Kang-sheng and Vera Chen both impressive, and more down to the fact that the script simply doesn’t give their characters enough depth to justify the amount of time spent on them.

It’s a shame, as for patient viewers interested in black magic and Taoist rituals The Rope Curse 2 has a reasonable amount to offer despite its over-plotting, and is well-directed by Liao Shih-han. Although an easy win for anyone with Netflix, it’s unlikely to impress the average genre fan, and is a little too dry and convoluted to work effectively as a supernatural shocker.

The Rope Curse 2 is available to stream on Netflix now.