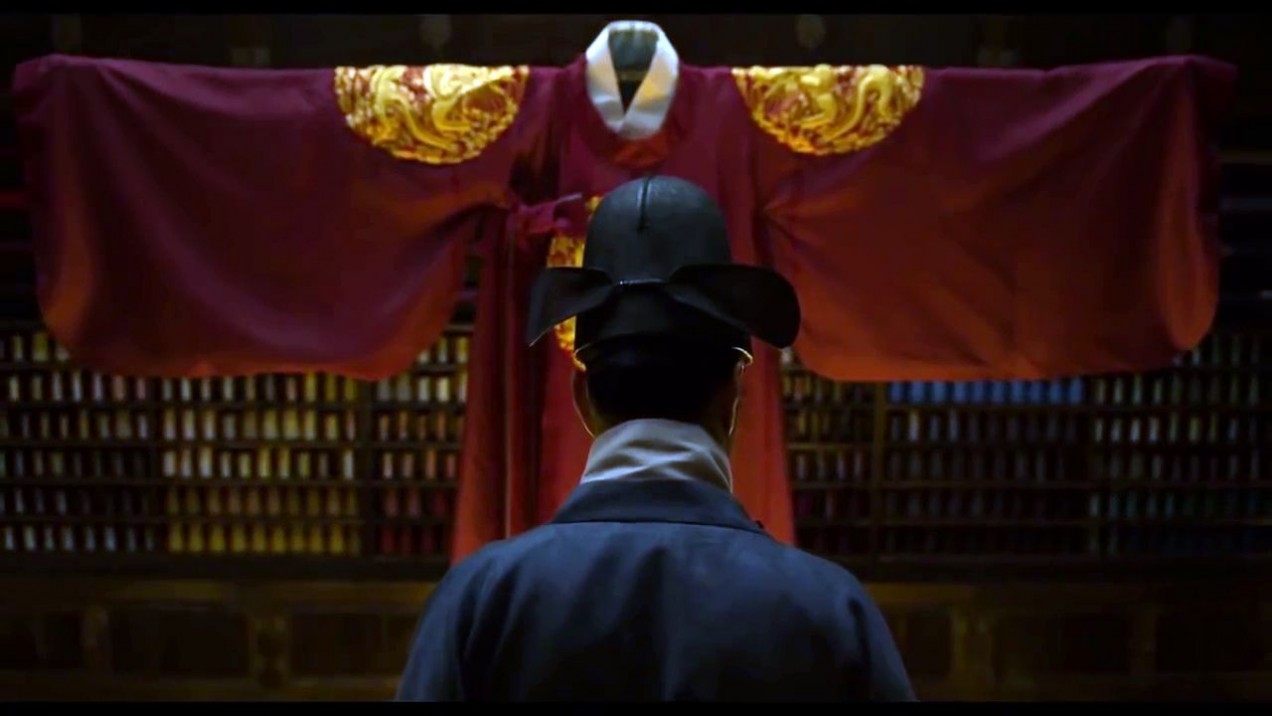 The Royal Tailor was previously reviewed by Andrew Daley.

After shaking up the Korean romantic comedy genre with the quirky and popular How to Use Guys with Secret Tips, director Lee Won-suk now turns his attention to another of the country’s most tried and tested forms, the historical costume drama. As its title suggests, The Royal Tailor is a costume drama in the truest sense, revolving around the rivalry between two court tailors during the Joseon era. For his second outing Lee gathered an all-star cast, headlined by actors Han Suk-kyu (The Berlin File) and Ko Su (Way Back Home), with support from Park Shin-hye (Miracle in Cell No. 7), Yoo Yeon-seok (Whistle Blower) and Lee Yoo-bi (Pinocchio).

The film opens with Han Suk-kyu as long-established royal tailor Dol Seok, whose career has seen him patiently maintaining his position and faithfully serving a line of monarchs, including the new, often volatile King (Yoo Yeon-seok). His carefully ordered existence is thrown into turbulence when a young clothes maker called Kong Jin (Ko Su) arrives at the palace, instantly finding favour and capturing the hearts of the court thanks to his colourful and unorthodox designs. Unfortunately, Kong Jin takes a liking to the Queen (Park Shin-hye), which, not unexpectedly, has far-reaching consequences.

Undoubtedly the biggest challenge facing Lee Won-suk with The Royal Tailor is trying to stand out from the incredibly crowded playing field of similarly themed Korean historical dramas, with seemingly every month turning up at least a couple of solidly-made though essentially generic offerings. Sadly, he doesn’t quite manage this, and as can probably be guessed from the familiar sounding plot above, the film lacks any kind of originality, somewhat of a surprise given Lee’s refreshing and creative debut How to Use Guys, which succeeded precisely due to its imaginative avoidance of convention. Here, the story is predictable to a fault, right down to its last act dive into heavy handed melodrama, recalling a variety of other recent genre efforts, in particular Han Jae-rim’s enjoyable Song Kang-ho vehicle The Face Reader.

This isn’t to say that The Royal Tailor isn’t engaging, and Lee does weave an interesting tale of the usual rascally but good at heart fellow falling foul of court ambition and politics. While Kong Jin isn’t exactly an innovative or substantial protagonist, his relationships with the more interesting Dol Seok and the Queen do have depth, and the film wins a few points for not overdoing the inevitable forbidden love theme. Things are a little drawn out in places, with a few too many anecdotal tangents (including modern day bookend scenes which serve no discernible purpose other than to distract from the period setting), though some tight editing helps, as does a faster pace than normally seen in such films. The film also benefits from not taking itself too seriously, and it’s definitely at its best when drifting into comic territory, with some very funny scenes and set pieces providing the highlights. Lee again proves himself to have a great sense of timing and feel for gags, and he skilfully combines the laughs with the drama without undermining either, at least until the final third.

The main draw here is likely the fantastic visuals and production design, and in these aspects The Royal Tailor really excels. Lee makes great use of what must have been a sizeable budget, with some of the best and more luxurious looking costumes seen in a Korean period film for quite some time. The attention to detail is quite stunning, and without wishing to reduce it to a fashion parade, much of the enjoyment here comes from marvelling at the procession of stunning outfits which grace the screen. Lee makes the switch from the modern setting of How to Use Guys to the Joseon era with ease and grace, and the film is both incredibly handsome and convincing throughout.

This gives The Royal Tailor a considerable lift, and for many viewers will be more than enough to distract from its lack of originality and other flaws. To be fair, there’s really nothing wrong with the film, it being well-made, acted and sumptuously designed, and the clearly talented Lee Won-suk is only held back by playing things safe and an overreliance on familiar genre themes and plotting – hopefully his next offering will see him return to the eccentricity of How to Use Guys with Secret Tips.

The Royal Tailor is available through YesAsia.