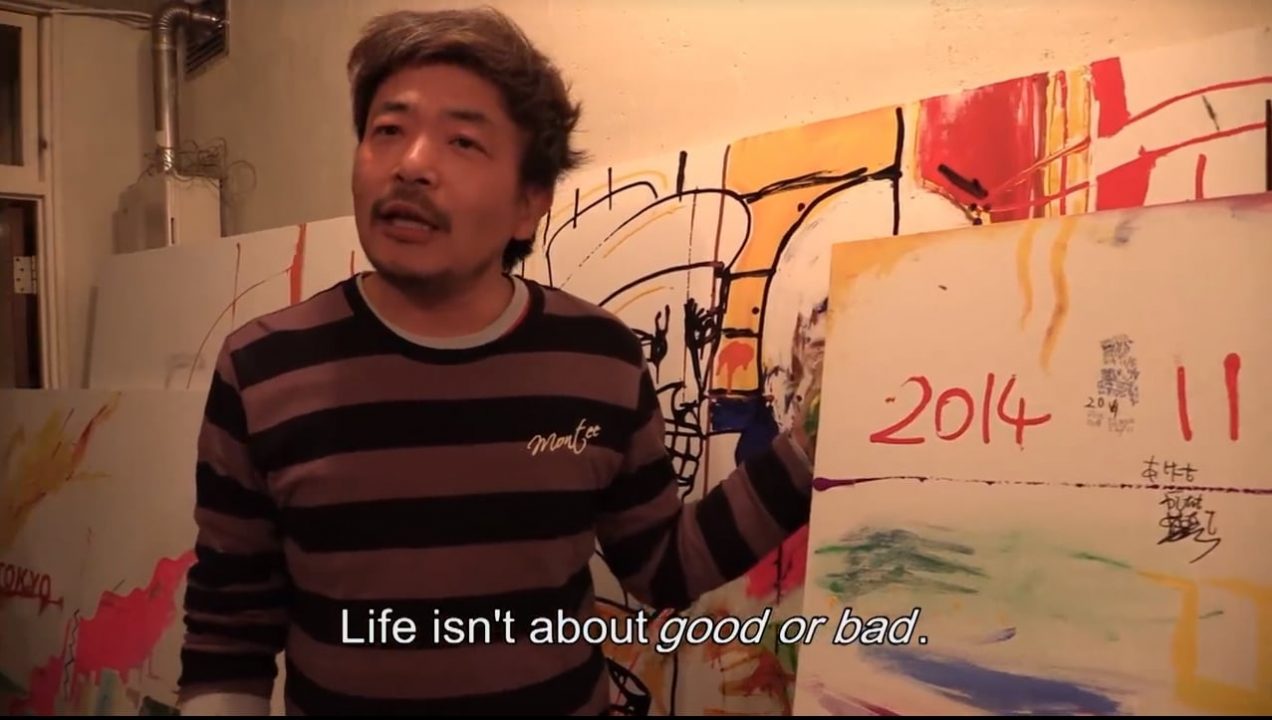 Shedding light to the artist as much as the man…

Arata Oshima (son of Nagisa Osima) follows Sion Sono through his hectic everyday program, as he tries to set of paint a portrait of the man as much as the artist. In that fashion, he shows footage from his concerts, from the The Whispering Star, from his painting studio, from his house and during various “missions” he undertakes in order to make his inexhaustible ideas into reality. Furthermore, some interviews are also included, with his wife (actress Megumi Kagurazaka), Shota Shometani and Fumi Nikkaido (protagonists of Himizu), while his first producer, his sister, and some friends also talk about their relationship with Sono and in that fashion, reveal much of his life story. The image they reveal is quite sincere, combining both his advantages and his faults, as the stories about his artistic genius are mixed with ones that involve him being drunk and not being able to handle even the smallest practical task (washing his clothes for example). The last part is actually revealed by his wife, in a very intense session, with her crying for most of the interview as she remembers how hard it was dating Sono and also appearing in his film.

Sono himself also talks a lot, usually in humorous fashion, with the fact that he is frequently sarcastic about himself resulting in some hilarious moments. The scene where he slams critics for giving bad reviews to his films and praising movies like The Great Passage is quite revealing, as much as it is funny.

Arata Oshima shot this documentary in guerilla fashion, actually running behind Sion Sono, trying to keep up for most of the film, along with his cameraman. In that fashion, camera movement is frequently hectic, although, in the end, Hidenori Takahashi did a good job in the cinematography department. Yoshihiro Okawa’s editing is also quite good, as he managed to glue together many different footages, including segments from his films, additionally to those described in the previous paragraphs, without letting the feature become confusing.

The documentary is actually shaped by Sono’s personality, being hectic and always juggling different works, and in that fashion. manages to portray a large part of his life, especially considering the length of it. Sono himself is very interesting as a subject, as he always does something artistic or jokes about something. However, I felt that some questions remained unanswered, particularly regarding the reason he is so focused in Fukushima, in his latest films.

The Sion Sono is a very interesting documentary, especially for fans of the director, as it sheds light in many aspects of his character and life, that have never previously been addressed before. The fact that the director also seems to be one of his fans, definitely moves towards that direction.