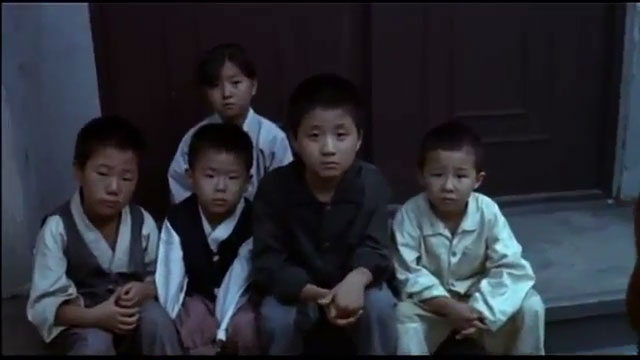 The tragic tale of the the separation of the Korean peninsula, an epic movie by Im Kwon-taek in which picking a side could be your last decision…

Of how many sides the world is made of? Is it two or more? History has asked mankind to answer the despicable question “On which side are you?” during wars and the most bloody moments of a Nation, like the Korean peninsula in the mid-fourties, one of the worst effect in the history of the fight between communists and capitalists. South Korean cinema has always tried in the late years to paint a truthful portrait of the war that split the peninsula in two different nations, but no one, has reached Im Kwon-taek’s results.

What happens when Korea becomes a free country after the declaration of independence in 1945? It’s the beginning of the cold war, two main powers have risen: Communists Russia and Capitalists USA. Now the conflict is all about an ideology, the Korean peninsula is split in half between the influence from the North, Russia, and the far and foreign United States, both interested in having an hot spot in the middle of Asia.

Everything starts in the October of 1948 with the Yoseun Rebellion. Yoseun it’s a small village next to those mountains which have given a title to this movie, The Taebaek Mountains, where there’s a strong division between the left and the right wing, soon to outbreak in a conflict.

Yum Sang-jin (Kim Myung-gon, Seopyonje) runs away on the mountains together with his fellow companions of the communists party. All of them leave their families behind, defenseless from the rage and hate of the right wing represented by Yum Sang-gu (Kim Kap-su, Two Sisters), Sang-jin’s brother, who starts raping Kang Dong-jin’s wife while he’s away on the mountains with his brother.

Kim Bum-woo (Ahn Seong-gi, Festival, Mandala, Sector 7, Nowhere To Hide) is in the middle of the conflict, a smart and intelligent person who knows perfectly what the communists want to do when they’ll gain the power, but he’s against both factions, accusing them of cruelty against the poor and innocent people. Then the war starts and nothing looks like what everyone expected.

The Taebaek Mountains deserves to be remembered as one of the best war movies in film history, sure it’s the only one who seriously depicts the tragic effects of war on the innocents and helpless, showing the crimes that each side has committed in the name of an ideology. Villages have been decimated after both the Right and the Left wing have had them under their control, both of them accusing the inhabitants of helping the other faction while they were just trying to survive a cruel world which put brothers against brothers (as Kang Je-gyu has taught us with Brotherhood: Taegukgi aka Brothers Of War).

Sincerity is the key word to describe this three hours long masterpiece in which there’s one character showing how everything could be solved with kindness and by thinking on what everyone is doing. Kim Bum-woo, teacher and affectionate reader, fails in his attempt to save his village and his country, a failure showed in an outstanding yet tragic finale.
Im Kwon-taek shows patience and a great cure for details in an epic movie in which there’s no character to whom we can get affectionate, except our dantesque Virgilio, Kim Bum-woo: his eyes are ours, the eyes of a culture grown with a far superior knowledge of what war could cause to people like us.

Cruel and strong images fill The Taebaek Mountains giving the perfect idea of what happened and why a country has been divided and in the name of what, everything done with the help of a movie camera moving as a punch in the stomach of each viewer, leaving the audience with a lump in their throats.

Im Kwon-teak: Run Far, Fly High, a retrospective of the director’s work, including The Taebaek Mountains, is currently taking place at ICA and BFI Southbank in London.