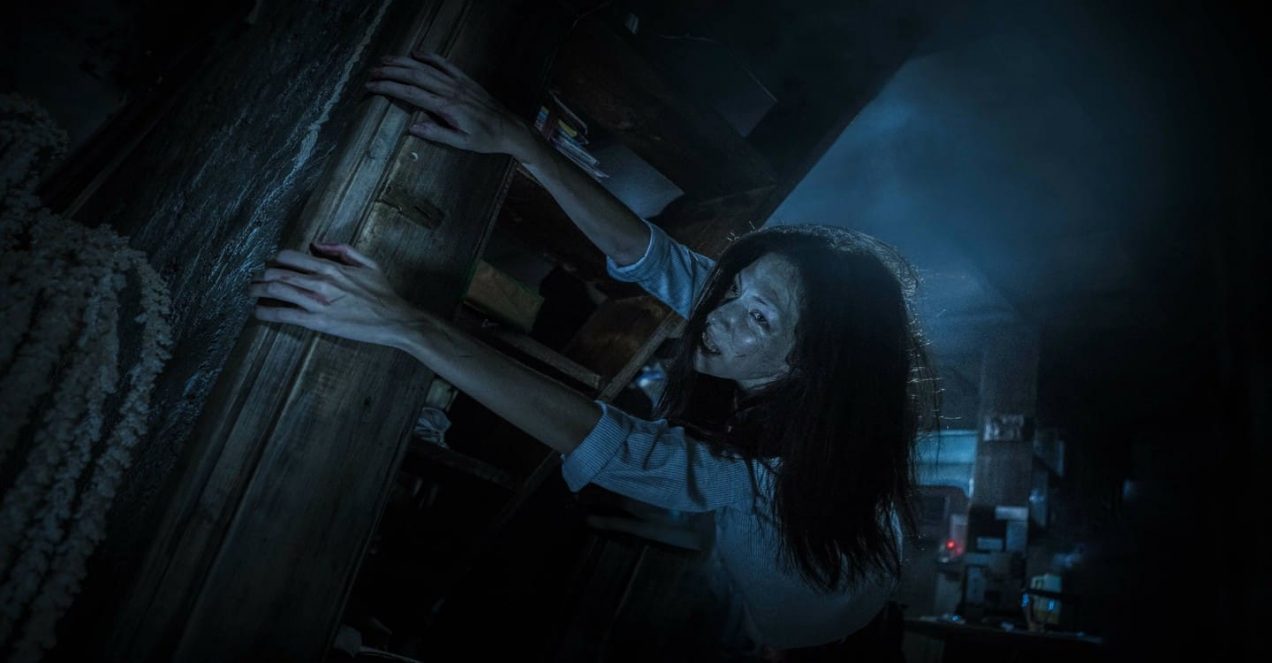 Given that The Tag-Along was a major commercial success in 2015, emerging as the biggest Taiwanese horror hit in a decade, it’s no surprise that a sequel now arrives, continuing the curse of the ‘Little Girl in Red’. Again directed by Cheng Wei-hao, who in between the two also directed the dark mystery thriller Who Killed Cock Robin?, the film keeps its focus on female protagonists, with Tiffany Hsu (Battle of Memories) returning, joined by Rainie Yang (Spider Lilies) and Francesca Kao (The Losers). With a bigger budget and an expanded, more ambitious storyline, the sequel out-performed the original at the box office, pulling in more than NT$100 million during its domestic release.

The film opens with Rainie Yang as social worker Li Shu-fen, investigating the case of a deranged woman called Mei-hua (Francesca Kao), who has been accused of abusing her young daughter, keeping her locked up, everything in their flat covered with exorcism spells and religious symbols. Shu-fen runs into domestic problems of her own when her fifteen-year-old daughter Ya-ting (Ruby Chan) falls pregnant and runs away from home, refusing to get an abortion and heading to the mountains, seemingly under the influence of the Little Girl in Red. Aided by Ya-ting’s boyfriend Chun-kai (television star Wu Nien-hsuan), who happens to be a shaman and skilled at channelling the spirit of the Tiger Lord, Shu-fen searches for her daughter in the wilderness, though instead comes across Yi-chun (Tiffany Hsu), the protagonist of the original film, in an abandoned hospital, pregnant and in a terrible state. With the fates of their children at stake, Shu-fen, Yi-chun and Mei-hua join forces to confront the Little Girl in Red, risking their lives and souls in the process.

The Tag-Along was a well-put together though essentially derivative horror, falling back on the usual jump scares, creepy kids and curses, and it’s fair to say that with the sequel the apple hasn’t fallen far from the tree. The two films are basically very similar, Cheng Wei-hao going for the same approach with The Tag-Along 2, and sticking to what made the original such a domestic success, throwing in plenty of clichéd, though energetic and entertaining frights, and despite its lack of creativity, the sequel offers a decent amount of spooky fun. Cheng has grown somewhat as a director since his debut, and the film benefits from some solid, atmospheric visuals, the scenes in the mountain forests having an enjoyably creepy and other-worldly air. Though the CGI special effects work isn’t great, the film benefits from going fully supernatural for its action-packed, if faintly ridiculous finale.

Where The Tag-Along 2 shows more ambition is through its narrative, which is considerably more complex and emotionally-layered than that of the original, taking the tales and experiences of its three female protagonists and interweaving them. Cheng does this reasonably successfully, and while things do get a touch convoluted in places, the film at least makes more effort than many other horrors of its type to have something to say, and its moments of melodrama are just about warranted. This having been said, the film’s take on motherhood might prove jarring and chauvinistic for viewers who dive a little deeper, its characters being punished for not adhering to old-fashioned ideas of the role of women and the script feeling decidedly judgemental. This is perhaps linked to the film being rooted in old Taiwanese folklore and beliefs, though it’s a shame that Cheng doesn’t explore its religious aspects more substantially instead of using them mainly as gimmicks and to wrap its plot around.

Of course, The Tag-Along 2 is first and foremost a horror film rather than a piece of social commentary, and on these terms, it’s an above average effort, and several notches above the kind of cash-grab sequel that might have been expected. Though there’s nothing new here, as with the original, it’s a perfectly respectable chiller, with enough energy and ghostly action to distract from its familiarity.

The Tag-Along 2 is available from YesAsia.