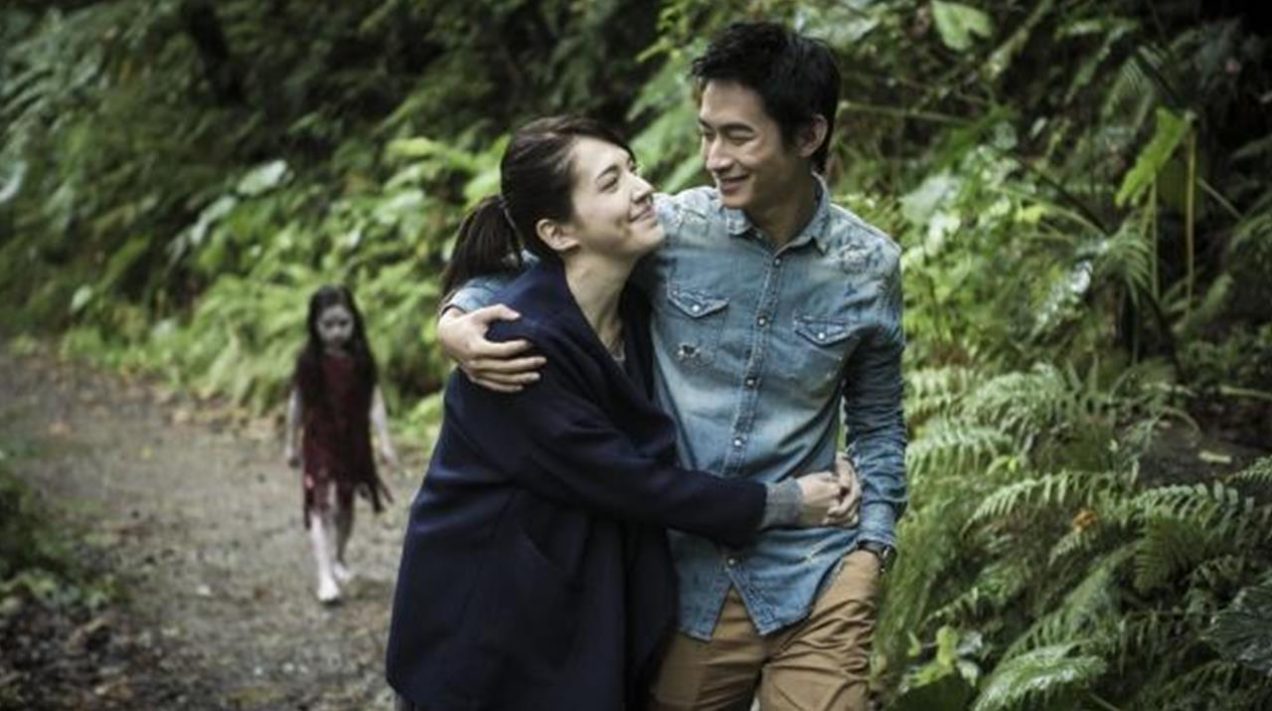 The Tag-Along is Cheng Wei-Hao’s feature-length debut, a creative re-interpretation of Taiwan’s most notorious modern urban legend. The legend began in 1998 with a story surrounding a video of a wedding in Taichung. Apparently, after watching some of the footage the family repeatedly noticed the presence of a girl in red they didn’t recognize from the actual event. They made several enquiries amongst the guests and even gave the footage to the media and their video experts hoping to find some answers. The footage was deemed to be legitimate but nobody amongst the public seemed to be able to ID the girl. Suspicion peaked when the man who captured the footage died in a car crash soon after. Since then there have been many sightings of “the little girl in red” amongst various road users and hikers within the Taiwanese mountains. One particularly creepy tale is about a young woman who went missing for several days during a hiking trip until she was finally discovered, hungry and scared, hiding in a small cave. When asked where she had been, she merely said she was “following a little girl in red with a red umbrella.”

Capitalizing on the proliferation of these eerie legends, Cheng Wei-Hao centres his film around the idea of the “girl in red.” Wei played by (River Huang) spends the initial parts of the film being highly neglectful toward his cynical yet caring Grandmother (Ying-Shan Liu). He soon regrets this after she suddenly disappears leaving himself both alone and haunted by grotesque nightmares. When Wei too disappears it’s up to his girlfriend Shen (Wei Ning-Hsu), a particularly strong-willed Radio host, to solve the mystery. She begins by enlisting the help of Uncle Kim (Po-Chou Chang), a security guard who seems to know his way around the paranormal. Soon they begin to understand that one or more malicious entities are taking people away to the mountains, as Taiwanese ghosts so often do according to legends. This becomes somewhat terrifying as the viewer slowly realizes that the only choice Shen has at this point is to go for a wholly horrendous hike.

Allusions to the “girl in red” and her now popular mythos are quite common in this film, but it does make a clear attempt to be its own distinct story. I personally find that although shot well, this film desperately lacks the unnerving imagery so often associated with the urban legends themselves. In a genre like horror so often less is more, by this I mean when depicting the source of the audience’s fear the more you reveal the less is imagined. Cheng decided to reveal as much as possible without leaving much to the imagination in this film. No matter how good or scary these reveals turned out to look, I couldn’t help but find elements of suspense or wonder were sacrificed in representing the evil so vividly. I would be hard pressed to say the scares in this film weren’t effective, but what was lacking there was the more cerebral fear of unknowns and the unexplainable. All in all, I found this to be a horror movie worth watching but only marginally, and definitely somewhat lacking for the seasoned fan of fright.

The Tag-Along screened as part of the Taiwan Film Festival UK 2019.