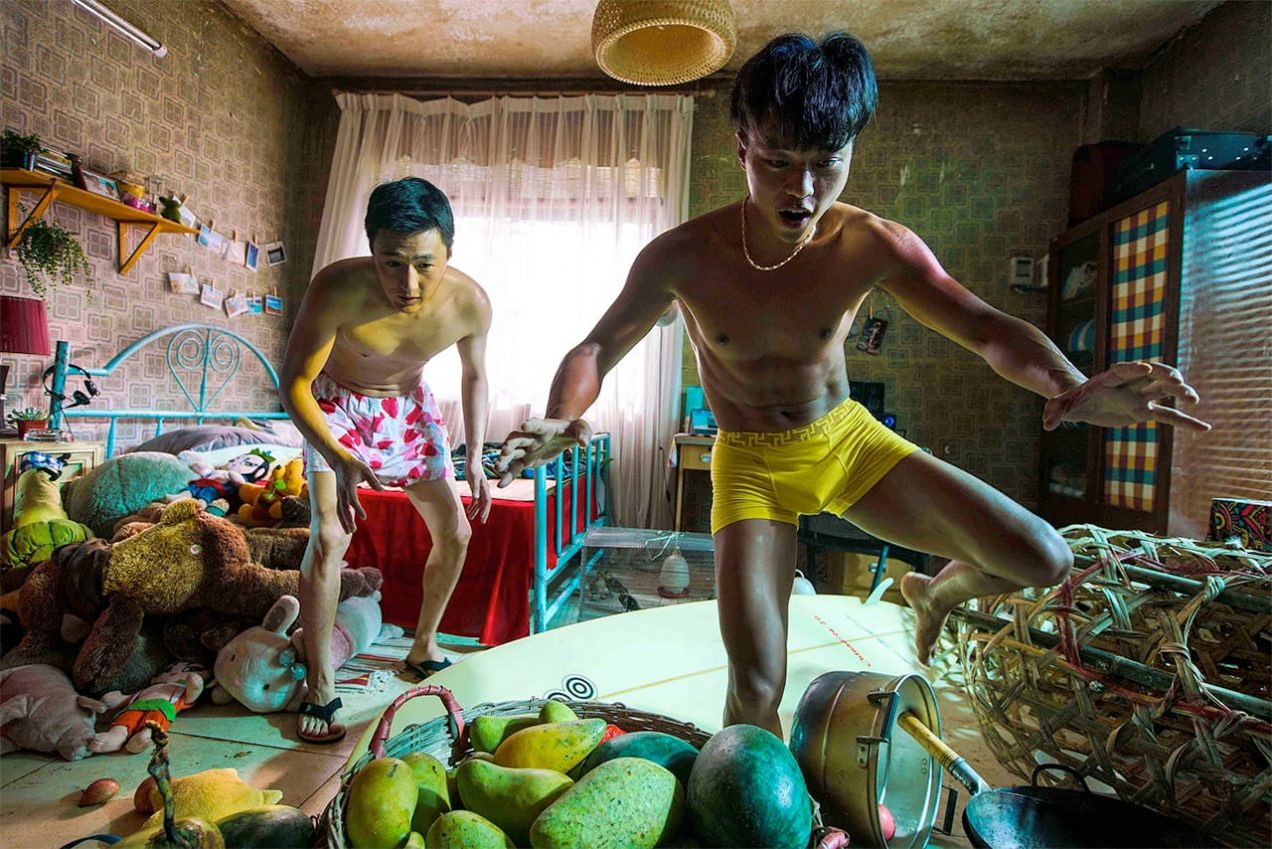 Bringing back to life the ghosts of Chinese pop culture past…

The Taste of Betel Nut starts as classic crime story set by the seaside, the camera follows a character who kills a bunch of gangsters for the yet unknown reasons. The entire movie is based on a retrospective that explains the initial slaughter of few bad guys who were just having dinner in some dodgy garage. The Taste of Betel Nut storyline does not surprise, nevertheless, it seems to be an excuse to show the two main characters, carefully observe them in action. And there is a lot to look at because they bring two legendary Chinese actors back to life, thus The Taste of Betel Nut turns out to be a love letter to 90s pop cultural icons, young generation’s idols who died because they did not quite fit the world they were brought into. It also explores the film as a medium that mummifies the actor’s image, making it immortal, frozen and lost in time after their originals death. Nevertheless, is there something more to that than karaoke on the beach, summer holidays that go wrong, complicated threesome and overall joy of life? Hardly.

The story revolves around Li Qi, a young man who is working with dolphins and seals at the ocean adventure park in Hainan Island. His friend, Ren Yu, looks like a Leslie Cheung double, so he makes money by impersonating late pop star, singing his songs at mobile karaoke he’s dragging along the beach. As roommates and part-time lovers, they created their own private heaven, with makeshift porch by the water facing sandstone hills. But from time to time view is disrupted by a sudden explosion that piece-by-piece destroys the hills, as if there was some danger approaching the utopia, shaking it to the ground. As vacation starts, Li Qi and Ren Yu meet the young girl, Bai Ling, who visits family during the school break. Three characters are more and more fascinated and drawn to each other, when the one night they try betel nut that brings about sexual revolution and experimentation that will lead the reckless, but bold trio to a tragic end.

Dynamics between the characters undoubtedly reminds that of Chow Yun Fat, Cherie Chung, Leslie Cheung in Once a Thief (1991, dir. John Woo), just as invincible, mischievous but so glamorous gang that roam coastal areas in bright sunlight. Li Qi, Bai Ling and Ren Yu are reminiscent of the legendary Hong Kong trio, but they do it with Chinese characteristics. Instead of a fancy car, they’re riding an old motorcycle; their enemies are not internationally respected criminals, but local gangs who hang out by the harbour. Nevertheless, the young trio is much bolder and does not leave their romance to viewer’s imagination. Sex in The Taste of Betel Nut is as rebellious as it’s based on consumerism, as the most attention is given to late Leslie Cheung’s double – his body is objectified, sexualised in many scenes of peeping while Ren Yu takes a shower. I’m not even mentioning overly tight underwear emphasised by the camera without a specific reason. Both situations don’t have any purpose in the narrative. It’s truly hard to take the eyes off of Yue Ye playing Ren Yu, because, apart from impersonating Leslie Cheung, he is building up his own separate character in the most charismatic way – he portrays the provincial entertainer and gigolo, whose ambitions don’t match up with the reality surrounding him.

In The Taste of Betel Nut, the location is just as important as characters. Hainan Island is promoted to be the “Hawaii of China”, the perfect summer resort with golf courses, sandy beaches, exclusive hotels and selected elites. Nevertheless, the postcard cannot look so flawless in China and that’s its beauty. Coastal areas are full of run down seafood restaurants, makeshift karaoke, illegal street food vendors, petty gangs and older ladies on holidays. However, Hu Jia was trying to get into the spring breakers spirit, quite successfully especially in the scene, where trio goes up to the mountains to attend the wedding of a friend who comes from an ethnic minority. Film director draws inspiration from Hainan Island’s character, which might counter the homogenizing demands of consumerism but at the same time it promotes ethnic culture as a commodity that serves tourism industry, promises betel nut as the instant enlightenment and liberation, at least till the holidays are over.

Hu Jia’s new film proves to be an interesting reflection on 90’s Chinese pop culture, attempt to bring the dead icons back to life. Unfortunately, The Taste of Betel Nut does not go into dialogue with them, just uses their images for nostalgic or entertainment purposes. Thus the pop cultural self-awareness and references to film history get lost in narrative dictated by the genre’s cliché. Pity that Leslie Cheung and Jia Hongsheng were resurrected only to become mannequins.

The Taste of Betel Nut screened as a part of Berlin International Film Festival, which ran from 9 to 19 February 2016.