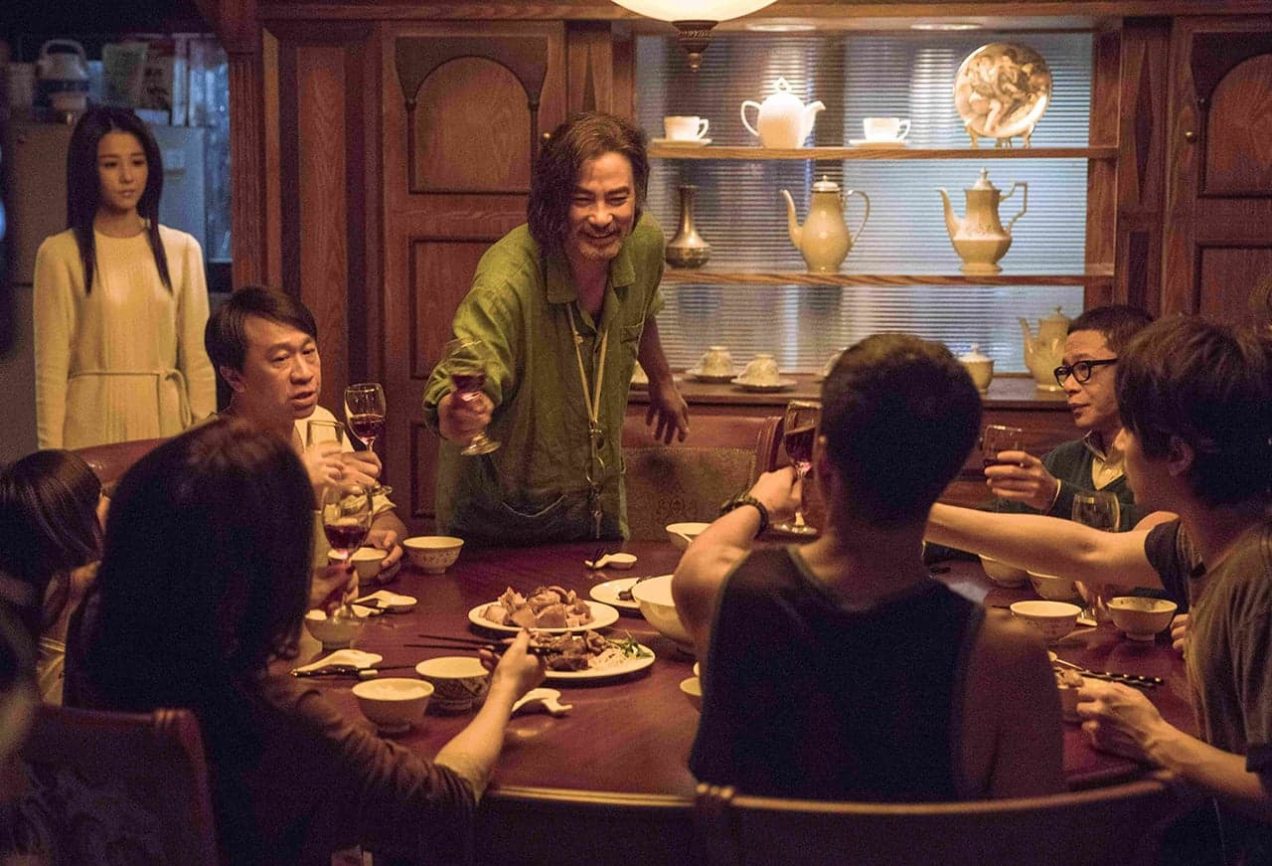 The Tenants Downstairs probably isn’t what many would expect from the pen of Giddens Ko, the incredibly popular Taiwanese writer responsible for the likes of You Are the Apple of My Eye (which he also adapted for the big screen in 2010), Café. Waiting. Love. and other gentle romantic dramas and comedies. Optimistically described as ‘black humour, fantasy, mystery and thriller’, the film is quite simply one of the maddest and most depraved from anywhere in the world from the last few years, helmed by Ko’s regular producer Adam Tsuei, former president of Sony Music Entertainment in the Chinese region, and who also worked on the Tiny Times films – not exactly a solid background in exploitation cinema. Given the involvement of Ko, the film has been much been talked-about ahead of its August 2016 domestic cinema release, and has in the meantime been playing international festivals.

The film doesn’t really have a plot so much as a premise – veteran Hong Kong actor Simon Yam, no stranger to sleazy cinema after having starred in the likes of Dr. Lamb, Naked Killer, Raped by an Angel and other delights during his career, plays the landlord of a building whose tenants he has specifically chosen to highlight different kinds of what he considers to be human deviancy. Including a bizarre, murderous young woman, a possible paedophile and his young daughter, a violent gym teacher, a shut-in college student, an office lady embroiled in countless affairs and a tormented gay couple, he spends his time watching them on his computer monitors, taking great pleasure from spying on their intimate moments. Simply observing them isn’t enough, and he starts to manipulate them to bring out the very worst in their natures, playing them off against each other, resulting in escalating violence and depravity.

Giddens Ko and Adam Tsuei’s The Tenants Downstairs is a high concept affair, a sadistic, grotesque freak show of a black comedy that revels in the darker recesses of the human soul, descending very quickly into psychosis and murder. Graphic and quite deliberately pushing the boundaries of cinematic decency throughout, it’s certainly not a film for all tastes, and gives the very best, or perhaps the worst, of the old school Hong Kong Category III shockers a run for their money. Packing in a veritable catalogue of vile deeds, from torture and mutilation through to rape and more, punctuated by the constant scraping up of various types of bodily fluids, the film is the most extreme from Taiwan in recent memory, outdoing even Joe Chien’s gruesome and morally dubious Zombie 108.

What’s really striking here though isn’t so much the gore and sexual cruelty, but the crazed way in which the film plays out, lacking any kind of real narrative or traditional sympathetic characters – the closest thing the viewer has to a protagonist is Yam’s insane landlord, who spends most of his time either talking to or pleasuring himself, interspersed with bouts of air-conducting to Beethoven’s Ninth. The anecdotal film has an incredibly odd tone, bouncing between fairly random set pieces which range from broad, bloody slapstick and farce through to the genuinely dark and uncomfortable. There’s a palpable meanness in almost every frame, Ko and Tsuei seeming to take real pleasure in Yam’s putting the rest of the cast through the ringer in often horrific ways. For some viewers at least the film will prove very amusing in its own, twisted way, with a number of imaginatively nasty jokes paying off, including a strange ongoing gag about teleportation. A daft final revelation only adds to the hysteria, and though it’s one which has been used before, it’s fittingly absurd, and doesn’t undermine the impressive effort put into weaving such an abhorrent tapestry of mad nonsense.

Perhaps surprisingly, The Tenants Downstairs is a visually impressive film throughout, and one which seems to have enjoyed high production values. Recalling the works of Tarsem Singh and David Fincher’s seminal Se7en, the production design is grandiose, colourfully lurid, and oddly beautiful in places, often at odds with its unpleasantness and making it all the more pronounced. At the same time there’s a definite theatrical impression, the rooms in the house having the feel of performance art stages, giving the proceedings a surreal aspect, accentuated by an amusingly over the top soundtrack featuring plenty of loud pomp and the wholly inappropriate use of classical music.

The Tenants Downstairs really is a great deal of mad, bad fun – for the right viewer at least. Definitely one to be approached with caution, and which might well turn off the average exploitation fan through its sheer weirdness, it’s a bold slice of Grand Guignol far removed from the kind of work Giddens Ko and Adam Tsuei are usually associated with.

The Tenants Downstairs screens as the closing film of the New York Asian Film Festival 2016 (NYAFF). Read all our reviews and coverage of #NYAFF2016.