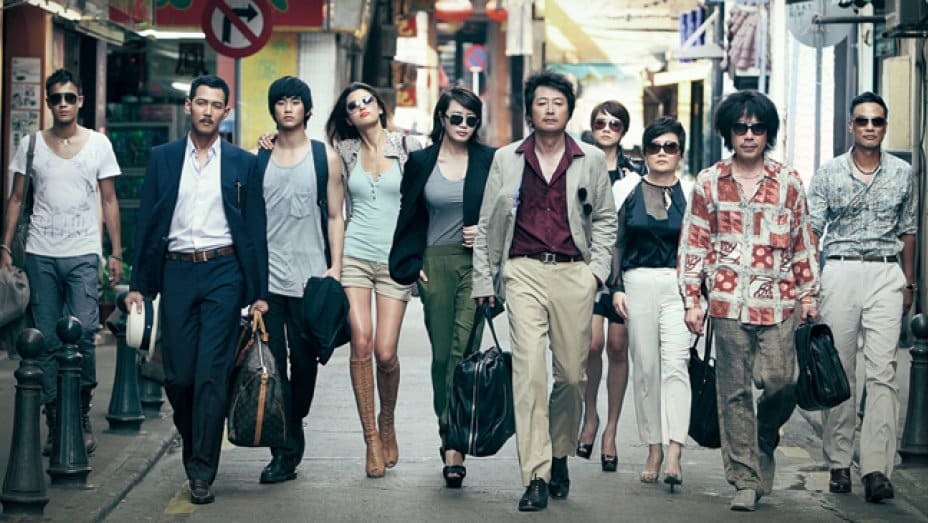 When the police come sniffing around after Popeye (Lee Jung-jae, The Housemaid, Il Mare, Typhoon, An Affair) and his crew’s latest heist, they decide to take a job in Macau with former cohort Macau Park (Kim Yoon-suk, The Chaser, The Yellow Sea, Woochi, Running Turtle) for the payout of their careers: Stealing the Tear of the Sun diamond to sell to dangerous Chinese triad boss Wei Hong.

Only working in Macau means teaming up with a local crew led by Chen (Simon Yam, Election, Exiled, Ip Man, Bodyguards and Assassins), an allegiance that’s bound to raise tensions. When Popeye brings over safecracker Pepsi (Kim Hye-soo, The Red Shoes, Three, Tazza: The High Rollers) those tensions only rise, as Park and Pepsi once had a relationship which ended badly after a heist with Popeye went wrong.

With each thief running his or her own agenda, it quickly emerges that the heist is doomed to failure. Honour amongst thieves, I don’t think so. But that’s just the start of their problems…

The Thieves confirms writer/director (and occasional actor) Choi Dong-hoon’s ability to make one hell of a crowd pleaser. You’ll probably already have read how it’s become the highest-grossing movie in Korean cinema, and though that may not be as well deserved as, say, the previous record holder Bong Joon-ho’s The Host, it’s easily to see why it’s bowled over audiences. There’s a great mix of laughs, thrills, drama and action bound up in a caper comedy.

Unsurprisingly there have been comparisons to Oceans Eleven – you know, Soderbergh’s first one, the one that was all right – and the like. Choi Dong-hoon has been keen to point out his track record in previous heist and con films like The Big Swindle and Tazza: The High Rollers, but there’s no doubting that Choi seems to be informed and learn from what has come before. Even Lee Jung-jae’s removable moustache seems to be a reference to David Niven’s dashing cat burglar in The Pink Panther films.

With such a big cast, it’s inevitable that many characters would get overlooked, but what’s interesting is that for once it’s the male characters. The female roles are so much more engaging than the male; from the sassy, trashy, hilarious cat burglar Anycall, played Gianna Jun (or Jeon Ji-hyun, My Sassy Girl, Il Mare), making quite an impression after disastrous roles in films like Blood: The Last Vampire; to Kim Hae-sook (My Sassy Girl, Thirst, Eye for an Eye) as con Chewing Gum; and Angelica Lee (or Lee Sinjie, The Eye, Koma, Re-cycle) as the safecracker Julie with secrets of her own, breaking her out of the horror roles that dominate her career so far. The way they interact seems more natural, with an underlying mutual respect beyond that of their male counterparts.

And without a doubt, it’s Kim Hye-soo who stands out as the films real delight. It’s nice to see filmmakers like Choi investing time in creating great, sexy roles for ‘older’ actresses like Kim, who might easily be discarded for having ‘hit 40’ (though not so much in Asian cinema). Though much of that may also have been down to the executive producer of the film, Choi’s wife.

In comparison the male characters are rather one-dimensional. There’s little to heartthrob Kim Soo-hyun (Covertness) as Jampano, Derek Tsang (Dream Home, Isabella, The Eye 2), or Oh Dal-soo (Oldboy, A Bittersweet Life, R2B: Return to Base, Hindsight) admittedly hysterical character Andrew, a token Korean on the Hong Kong gang. Legend Simon Yam doesn’t seem as well utilised as you might want, especially as Choi expressed how much he’s wanted to work with him since skipping school to watch his movies. Even Kim Yoon-suk’s character Park seems to lack real depth.

Much was made out of the location shooting in Macau, though in the cold, soulless casinos (many scenes of which were shot elsewhere) there’s little flavour of former Portuguese colony. Kind of a shame and a missed opportunity, as I was hoping for something as picturesque as Johnnie To’s Exiled or Wong Kar-wai’s Days Of Being Wild. (Though reading between the lines from the Q&A at the London Korean Film Festival’s opening gala, that may have come down to filming restrictions enforced on Choi.)

To be fair, for such a large cast, Choi does a decent job of keeping all the plates spinning, but inevitably some drop, and there’s still more than the plot actually requires. Keeping up with all the subplots takes it’s toll on the running time, with more false endings than should ever be necessary. (Is this the end. No this is. Hang on, now? Oh come on, this has to be…)

Unlike so many Korean films, though, Choi keeps the pacing tight, making this the equal if not easily better. It’s impossible not to be carried along in this thoroughly enjoyable caper comedy. Sure, it might not be groundbreaking, but it’s definitely an experience that deserves to be seen on the big screen.

Let’s hope we get a chance in the UK…

The Thieves played as the opening gala screening for the 7th London Korean Film Festival, with director Choi Dong-hoon and star Kim Yoon-suk in attendance.