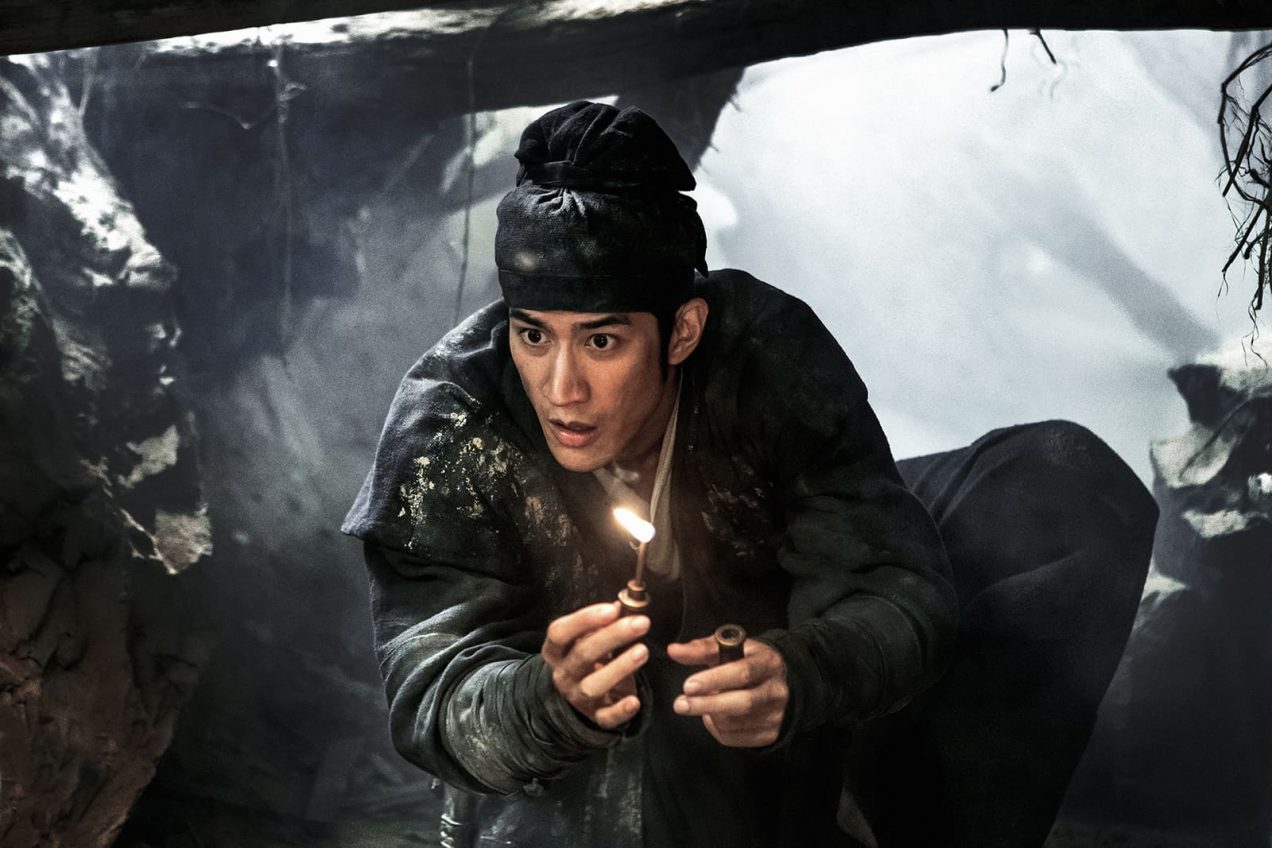 Yet another hollow CGI filled fantasy film from China…

Riding on the wave of China’s craze for big blockbuster CGI infested films Yuen Woo-ping jumps on board with Tsui Hark serving as the producer in their latest collaboration The Thousand Faces of Dunjia. After his directional misfire Crouching Tiger Hidden Dragon 2: Sword of Destiny he had a lot to make up for. Though not the dud that was CTHD2, it’s still not the true return to form that fans were hoping for. Sharing the same Chinese name as Yuen’s 1982 work The Miracle Fighters but baring little connection other than the mix of magical elements that act a little of the reboot that was initially announced. with Hark serving as writer, producer, original score and editor unsurprisingly his influence is present all over the film.

An alien creature has once been subdued by the martial arts society is on the brink of being reawakened by another creature and the Wuyin sect along with the martial world are tasked with preventing this from happening. Prophesied that a new leader is a key in destroying the said creature, the Wuyin society’s Zhuge (Da Peng) traverses to a peculiar school of medicine in search for there new leader, Circle (Zhou Dong Yu). Amidst this is something about an ultimate weapon that can destroy the world aptly named “World Destroyer” in which the worlds most powerful martial artist gather to witness its power but sadly falls into the hands of the alien creature. Caught in the midst of this ancient feud is constable Dao Yichang (Arif Rahman Lee), who ends up accompanying the Wuyin sect lead by Dragonfly (Ni Ni) in destroying the evil foe.

That’s the basic gist of the story, but if you are expecting coherency and reasons for why things are, then expect to be disappointed. There are so many elements in the film that not all of it makes sense or serve any real purpose. The astrological reference is baffling and the audience will be hard pressed in connecting any of this in the opening narration with everything that proceeds it.

Yuen Woo-ping has been known to indulge in wacky comedy, evidence in films such as the original The Miracle Fighters, Hero Among Heroes, Drunken Tai Chi and Mismatched Couples which all possessed outrageous antics. The Thousand Faces of Dunjia sees Yuen returning with his wackiness but much more assured this time around maybe the presence of Tsui Hark has help reel it in. The humour and antics are easier to stomach this time around and there are more hits than misses. The opening alone feels like it belongs in a Stephen Chow film. Sadly Yuen and Hark’s playground of ideas are mixed into an unsatisfactory concoction of a film with ideas that are never fully rendered. The target audience clearly is the video game generation where League of Legends is a major attraction in the China market. The aesthetics are very much that of the computer game standard. The main villains feel like a video games boss, sadly there design is very bland with them coming across as B-grade computer game. The lack of characterisation and generic motivation makes for a weak protagonist. The film is brisk moving to each scenario, each situation has there little comedy beats to mildly engage and help move things along. The film suffers slightly from the supposedly emotional moments but thankfully its never dwelled upon for far too long. There are so many questionable moments in the film such as how is such powerful martial arts leaders so easily dispatched? Why are the 3 best Wuyin masters so weak? Circles presence and what is she is never explained? The purpose of the world destroying weapon? which serves little purpose up until the finale where its an underwhelming display of computer-generated spores.

Da Peng’s amusing introduction as a blind doctor where he bluffs his way into the clinic for strange ailments is intriguing and fun, but the final pay off is less than satisfactory with little connective tissue bringing it to its conclusion. The four-way love square can be amusing at times but its never fully developed enough for viewers to feel invested, and the eventual tragic outcome that befalls certain characters feel mute. The use of sign language is a brilliant touch and as Ni Ni dishes out commands she shows a hint of great authority. Ni Ni channels Shu Qi’s performance in Journey to the West, providing a hard and authoritative leader but also a quiet yearning for her desired love. She mostly provides a convincing performance but can on occasions feel forced in her bravado antics. Zhou Dong Yu is suited perfectly as the ditzy Circle but her transition to conflicted individual and pain is less than convincing. The rest of the Wuyin students serves little purpose. Their presence feels unnecessary considering they do little to nothing and each time they engage in combat they are pretty much quickly dealt with. Each disciple has there quirks; hunch back, one eye, tall etc. but you will be hard press to know what they do and what their names are. Aarif Rahman Lee’s constable Dao feels less like a believable character than a plot device. His performance also feels uncomfortable not quite hitting the comedic moments as well as his costars. As with all Tsui Hark’s films, the production design is impressive as is the musical score. Visual effects, by and large, is of a high quality with the occasional dip in quality.

Those expecting great fight choreography will be greatly disappointed this film forgoes martial arts with CGI, combatants are often flailing their arms while effects do the rest. It’s disheartening to see Xing Yu not get a decent fight and his showdown is played for laughs. Any real sense of danger and peril is negated by the outpour of CGI courtesy of numerous Korean effect companies. The finale is anti-climatic with the introduction of our heroes new found powers that pose little to no purpose. A final bout that is an orgy of visual effects with the fight taking place in the air and our leads barely participating as the CG creatures battle it out. Wirework is impressive as expected from the maestro and his team, and there’s a certain elegance that only certain choreographers can pull of when suspending talents on wires. As people start flying about, leaping on rooftops and evading attacks its all presented with grace. A lot of the villains meet their demise very quickly bringing very little threat to the heroes.

The film does end in a cliffhanger clearly paving the way for any potential sequels though sadly the world created by Hark and Yuen is not involved enough to warrant future proceedings. It’s fast-paced and provides enough variety that some entertainment can be had. Martial arts fans will be disappointed with the lack of fights.

The Thousand Faces of Dunjia is available from Well Go USA on Blu-ray and DVD, and can be watched on NetFlix.