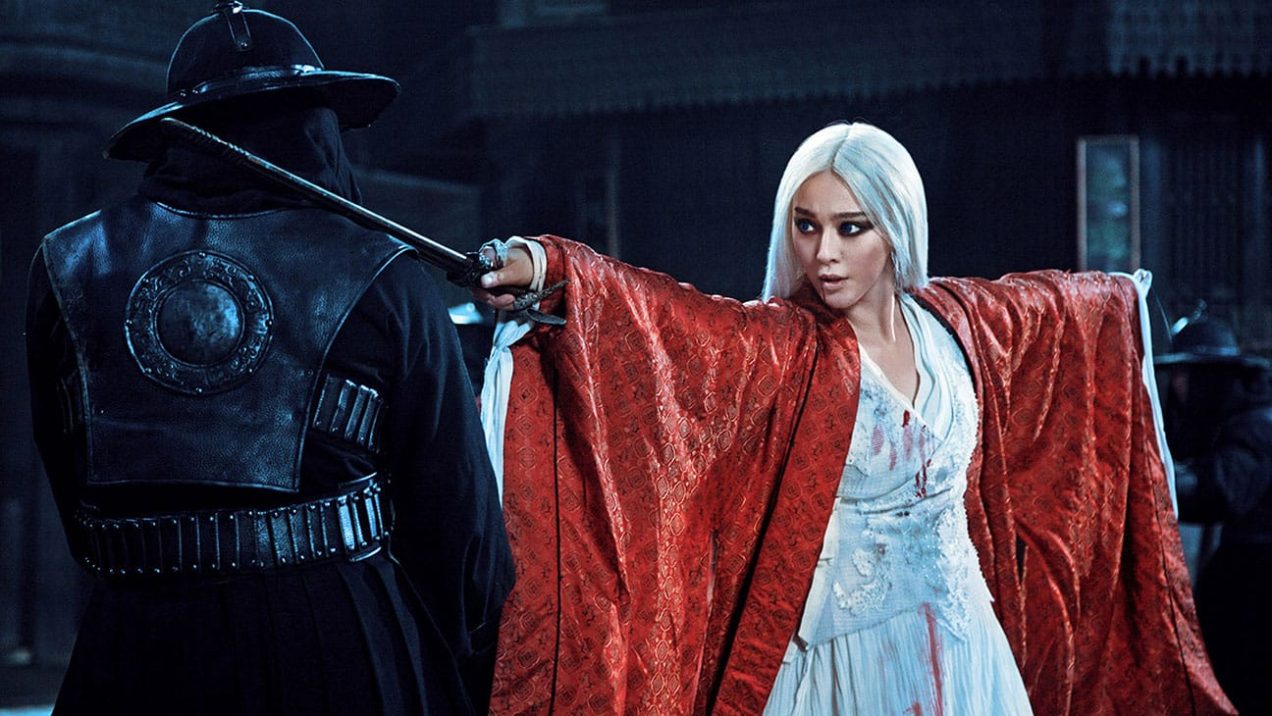 Proving again that it’s not only Hollywood that’s obsessed with revisiting past hits is The White Haired Witch of Lunar Kingdom, a new take on Liang Yusheng’s classic text that for many was perfected for the screen in 1993 by Ronny Yu with his seminal The Bride with White Hair. Bravely taking on the task of providing a new definitive version is director Jacob Cheung (A Battle of Wits), backed by a huge budget and state of the art 3D special effects, plus headline talent Fan Bingbing and Huang Xiaoming – a lead pairing which, despite the film receiving mixed reviews, helped it emerge as one of the biggest domestic hits of the year.

Set near the end of the Ming Dynasty, the plot sees Huang Xiaoming as Zhuo Yihang, future leader of the Wudang Sect, who travels to court to pay tribute to the emperor. However, the land is thrown into turmoil when the emperor dies, and Yihang is forced to flee after being blamed for the crime, set up by the evil royal eunuch Wei Zhongtian (Ni Dahong). Trying to get as far away as possible, he heads for Fort Luna near the north western border of the country, where he encounters the beautiful Jade Rakshasha, Lian Nishang (Fan Bingbing), who leads a gang dedicated to bringing down corrupt officials and defending the local peasants. Although initially unsure of each other, Yihang and Nishang fall in love, though their blossoming relationship is threatened when their various opposing factions converge on them, the government having labelled Nishang an enemy of the state who is to be hunted down and killed by Wei general Jin Duyi (Vincent Zhao, True Legend) – complications ensue.

Though Liang Yusheng’s source material has been directly or indirectly adapted for the large and small screen countless times, it was always Yu’s Brigitte Lin and Leslie Cheung version which was going to be the main point of comparison – and unsurprisingly, The White Haired Witch of Lunar Kingdom doesn’t really come close to capturing the same kind of magic. Given the classic status of The Bride with White Hair, this in itself isn’t necessarily a crushing criticism, and there’s something to be said for what Jacob Cheung has managed to pull off here, the film having enough points in its favour to make it just about worthwhile.

Despite being designed with mass appeal in mind, one thing White Haired Witch certainly can’t be accused of is dumbing down or paring back its source material, Cheung packing in a huge amount of plot in the form of politics, intrigues and warring factions. There’s a great deal going on around the central romance, not to mention a huge cast of supporting characters, and though the attempt to combine fact and fantasy doesn’t always convince, the film does engage, at least for those viewers prepared to pay attention. Strangely, while there’s enough here to have warranted a far longer film, Cheung keeps things moving along at fast pace, cramming it all into just 104 minutes, giving the proceedings an at times breathless feel. Although on the plus side this can perhaps be seen as a victory for efficiency over the usual blockbuster bloating, it does get confusing in places, the story-telling and sketchy narrative not being strong enough to bear the considerable weight.

Crucially, the film’s central relationship works reasonably well, at least in terms of lowered expectations, Cheung seeming to be playing it for tragic drama rather than actual romance. Needless to say, Fan Bingbing and Huang Xiaoming are not Brigitte Lin and Leslie Cheung, though they’re certainly a good looking pair, and their courtship, made up mainly of smouldering glances and longing stares is moderately effective, if occasionally inadvertently amusing – this in no small part is due to Huang Xiaoming’s oddly smug performance, which sees him spending much of the running time smirking or trying too hard to look mock-handsome and what was presumably meant to be noble. To her credit, Fan Bingbing turns in one of her better shows of late, never disgracing the iconic role, and though there’s very little emotional involvement or passion to the Zhuo Yihang and Lian Nishang love affair, it does hold the interest.

Given the advances in technology, one area where White Haired Witch would be expected to excel is in that of action and special effects, and here, Cheung does a pretty impressive job, the film making good use of its large 100 million yuan budget and locations and enjoying a suitably epic fantasy feel. Some thanks for this go to Tsui Hark, who served as the film’s artistic consultant, primarily working on the 3D effects, and though these count for little on the small screen, the film does feature better CGI work than many of its peers. Featuring solid choreography from Stephen Tung, the martial arts and battle set pieces are similarly of a good standard, showing imagination and making for a few standout moments, and this helps distract from the film’s narrative and romantic flaws.

The White Haired Witch of Lunar Kingdom was always going to be in somewhat of a difficulty position, being unlikely to convince fans of The Bride with White Hair and jostling for position in an already overcrowded playing field of similar Chinese blockbuster historical and wuxia epics. As such, and viewed on its own merits, it’s an above average film that offers a respectable amount of entertainment and star value, and which perhaps shouldn’t be judged too harshly – at least until the end credits, when Leslie Cheung’s Bride theme song Red Face, White Hair plays, precisely when Jacob Cheung should have been hoping audiences wouldn’t be casting their minds back to Ronny Yu’s far superior Liang Yusheng adaptation.

The White Haired Witch of Lunar Kingdom is available through YesAsia.

One thought on “The White Haired Witch of Lunar Kingdom”