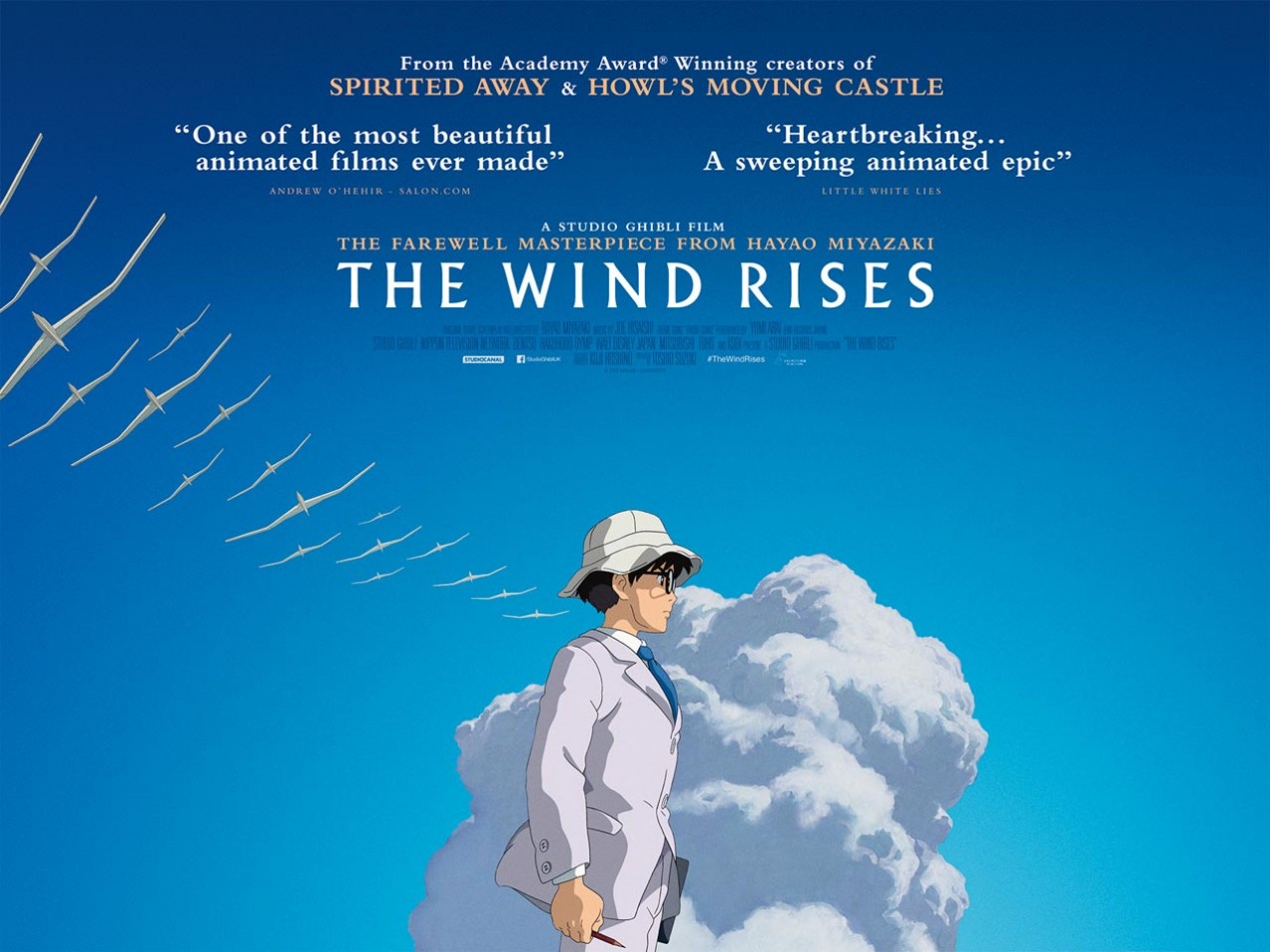 Miyazaki’s final flight is as glorious and breathtaking as ever…

The time has come for critically acclaimed director, animator Hayao Miyazaki to put the sketching pencil down and retire for good. This shall be a huge loss for Studio Ghibli but by no means did the man close shop early, producing one last final masterpiece. The Wind Rises embodies everything this filmmaker adores: fantasy, dreams, romance and most prominently, aviation. This film almost feels like a personal project for Miyazaki’s fascination with flying machines. Back in 2002, he even directed a short film about the history of flight for an exhibition in his Ghibli Museum. The first thing you need to know about The Wind Rises is that, “Airplanes are beautiful dreams”, and so is this film about them.

The film introduces us to a young boy named Jiro Horikoshi. A boy who dreams of nothing more than flying planes. He even dreams of the famous Italian designer Giovanni Caproni, who despite the boy’s nearsightedness fills him with confidence that there is much more to planes than just being the pilot. The film’s title also plays a big part, taking a line from Paul Valery’s poem, “Le vent se leve, il faut tenter de vivre”, translating as “The wind is rising! We must try to live”. The tagline almost acts as the motivation for Jiro’s drive to follow his dreams and design airplanes even if he cannot fly them. However, it is made very clear from the outset that planes can be a thing of beauty, but they can also be seen as a design for destruction. Jiro transforms into a successful engineer joining Mitsubishi in 1927 and eventually becomes one of the worlds most innovative and accomplished airplane designers. In the process, he falls madly in love with Nahoko, a woman who tragically has tuberculosis that she is so desperately trying to recover from. But this film has much more to offer than a heart-rending love story.

The Wind Rises creates a sombre portrait of Japan between wars and natural disasters. We witness The Great Kanto earthquake of 1923, the Great depression, the devastating tuberculosis epidemic and the underlying threat of WWII. Due to this, the feature may prove difficult to win over some western audiences. Rather than the family friendly adventures, this Ghibli offers something a whole lot deeper. Something rooted deep within the director’s being that translates seamlessly on screen. Considering this is his final piece, the already thriving fan base will ensure The Wind Rises gets a worthy amount of buzz. Even though there is a slight shift in genre here, there are still aspects that remain consistent with the more fantasy fixed plots of Spirited Away (2001) and Howl’s Moving Castle (2004). Moreover, one cannot ignore the similarities between this and Porco Rosso (1992) not to mention the repetitive mention of “We must live” appearing first in Nausicaa of the Valley of the Wind (1984).

The wind acts as a guide for these characters. It almost feels alive, changing from frame to frame, blowing flight into the intricately drawn planes on screen. As well as the fantastically drawn animation we have the return of composer Joe Hisaishi delivering another breath-taking score that embodies a 20’s Italian feel, juxtaposed with the rather traditional Japanese landscape. Easily one of the most realistic films Miyazaki has made, yet we still have a powerful dream-like sense but as the wind shifts we see how quickly dreams can become nightmares. Unlike his closest friend Honjo who considers the German way of advanced technologies, wealth and tobacco, Jiro stays firmly still lost in his own utopia of dreams and equations.

Once again, Miyazaki has provided us with a hauntingly beautiful film. A film filled with dreams and aspirations fuelled by the goodness of mankind. Throughout the turmoil’s of earthquakes, love and war, The Wind Rises conveys that we must live life to its fullest whatever the circumstance.

Gloria Daniels-Moss
A former student and graduate of Canterbury Christ Church University where she had the pleasure to study English and most importantly Film! Her main love for Japanese Cinema comes from seeing Spirited Away when it was screened at Pinewood Studios for Club 7 at the mere age of 11... more
Read all posts by Gloria Daniels-Moss