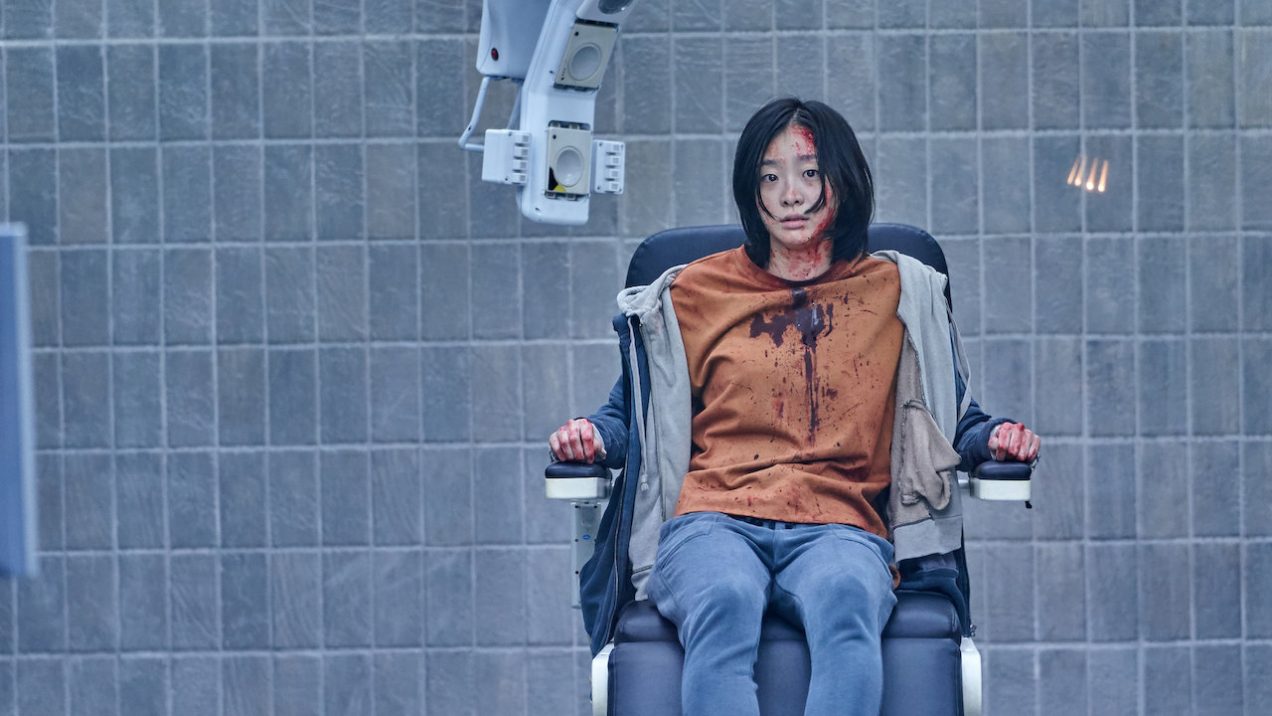 A teenage girl discovers that she has psychic powers, with violent results…

Korean writer-director Park Hoon-jung, best known for hard-edged macho thrillers like New World and The Tiger, returns with something a little different in the horror The Witch: Part 1. The Subversion (also released simply as The Witch, the literal translation of its Korean title). Rather than Park’s usual tough male protagonist, the film revolves around a teenage girl with psychic powers, played by up and coming young actress Kim Da-mi (Marionette), who won several awards for her performance. As well as doing well at the domestic box office, The Witch played a number of festivals around the world, with Part 2 due for release in 2021.

The film opens with a young girl escaping from a mysterious facility and from the clutches of the sinister Dr. Baek (Jo Min-su, Pieta) and her right hand man Choi (Park Hee-soon, who worked with the director previously on V.I.P. and The Showdown), being taken in by an elderly couple. Ten years later, the girl, now called Ja-yoon (Kim Da-mi), is a normal high school student, who applies to take part in a local talent television show, performing a neat trick with a levitating microphone. After she wins the contest, which is screened nationwide, Baek and Choi get back on her trail, and a strange young man (Choi Woo-shik, Train to Busan) starts turning up, hinting that he knows about her past. With her life thrown into chaos, Ja-yoon starts to wonder who she really is, finding herself in possession of powerful psychic abilities.

There’s a lot going on in the awkwardly-titled The Witch: Part 1. The Subversion, and the above synopsis only really covers the first third of the film, before events really start picking up speed. Park Hoon-jung, who also scripted, juggles several subplots, and though things do get a bit muddled in places, he manages to keep the film engaging and tense, building up to a huge third act twist which effectively turns everything on its head. Although it’s best not to say too much about the plot, as can be guessed from the film’s title, it’s clearly only part of the story, and it has to be assumed that a fair amount of the narrative serves mainly to lay the groundwork for the sequel – or the next chapter, with the world Park creates having plenty of potential for expansion. This doesn’t really cause any problems for the film, and it works perfectly well on its own merits as a fast-paced, blood-soaked and psychotic coming of age tale, with a vein of bleak humour which at times recalls I Saw the Devil, which Park also scripted. The Witch also wins points for being almost entirely free of the melodrama which tends to undermine so many Korean genre films, maintaining a fun ruthlessness right through to the end.

The film benefits considerably from some excellent performances from the cast, which helps to paper over some of the cracks in the narrative. Kim Da-mi, in particular, is excellent in the lead, managing to pull off the difficult balancing act of making Ja-yoon likeable and vulnerable, while gradually working in hints about her powers and suggesting that the viewer should probably be at least a little bit afraid of her. Her development and journey drive the film, and Kim does a great job of making the changes she undergoes convincing – the young actress won multiple awards for her performance, including Best New Actress at the Grand Bell Awards, The Seoul Awards and the Blue Dragon Film Awards, all of which were richly deserved. While Choi Woo-shik and Park Hee-soon are both entertaining in scenery-chewing supporting parts, The Witch is very much a female-focused affair, and it’s Jo Min-su who gets the film’s other standout role as the villainous Dr. Baek, the actress on great form and making her a very watchable antagonist, winning a slew of Best Supporting Actress nominations for her work.

What’s perhaps most surprising about The Witch is the amount of violence and gore that it packs in. While the film might sound like a teen-friendly affair, once Ja-yoon’s powers materialise and she comes up against Baek, Choi and other enemies, the viscera really starts to fly. Park has always had a talent when it comes to gritty action, and this serves him very well indeed here, the film exploding into a series of intense set pieces and slaughter scenes, with limbs being snapped, stabbings, smashed heads and more. This really ups the film’s sense of danger, and it becomes increasingly vicious as things progress, making it all the more entertaining and exciting.

The Witch: Part 1. The Subversion easily ranks as one of the best Korean genre films of 2018 and 2019, Park Hoon-jung successfully combining coming of age drama, action thrills and buckets of bloody gore. Kim Da-mi excels in the lead role, surely being marked for big things, and The Witch: Part 2 is eagerly awaited.

The Witch: Part 1. The Subversion is available to stream on Amazon Prime Video UK from Signature Entertainment.