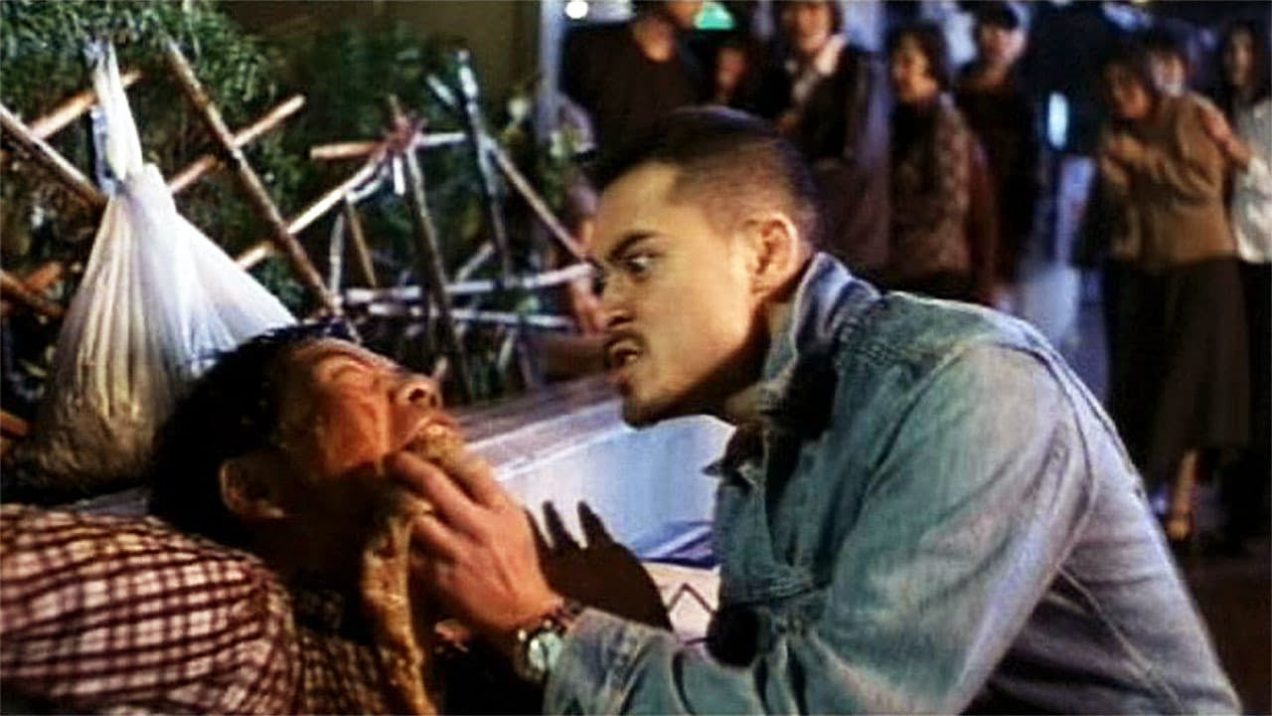 Hollywood has borne witness to a number of head-to-head battles between films about giant meteors, Robin Hood, and even crime solving dogs. However, the world has never seen a contest like that of the 2001 Hong Kong clash between Human Pork Chop and There is a Secret in my Soup, made and released at the same time, and both inspired by the horrific real life ‘Hello Kitty’ murder case. The two are uncannily similar, sharing not only the same basic plot, but the same scenes and structure, and so given that both are pretty execrable films, brimming with sleaze and sadism, the question here is not so much which is better, but rather which of the two you should watch if forced to decide at gunpoint.

To cut to the chase, the answer is probably Human Pork Chop, though this is a victory by default as much as anything else, due to the simple fact that There is a Secret in my Soup has few redeeming values, either as a Category III film or as a piece of exploitation cinema in general.

A quick rehash of the plot: the police (led by cult favourite actor Michael Wong, Zombie Fight Club) raid an apartment in Kowloon and make the gruesome discovery of a human skull inside a Hello Kitty soft toy. They round up the suspects and begin the interrogation, gradually learning the horrible truth. The skull belongs to Maggie (Cherry Chan, also credited as Chan Chil Chil, The Story of Prostitutes), a local woman forced into prostitution at a brothel after being thrown out by her cruel husband. As it turns out, Maggie made the fatal error of crossing the gang that runs the brothel, including pimp Rocky (Hugo Ng, from the Category III classic Daughter of Darkness), his wife Pat (Angela Tong, Bio-Zombie), and their lackey Joe (Gabriel Harrison, Model from Hell). It transpires that the desperate Maggie stole some money from Rocky, and being unable to pay it back, was imprisoned, tortured, and killed, before tragically ending up in the soup.

The main thing to be said in favour of Human Pork Chop was that it was genuinely horrific, and though nihilistic and exploitative at least had the sense not to glorify any of the events, with low production values that helped give the whole sordid affair a grimy sense of realism. Director Yeung Chi Gin (who was responsible for the huge Category III hit Pretty Woman) takes There is a Secret in my Soup in a different direction, throwing in completely pointless soft-core sex scenes, one of which is truly bizarre, taking place in an alleyway and involving extended use of a vacuum cleaner. These scenes are totally at odds with the film’s sicko subject matter and are both pointless and vaguely offensive, making the overall tone wildly uneven. A similar problem is caused by the odd censoring of the Hello Kitty doll whenever it’s onscreen, the optical fogging used providing an unintentionally amusing contrast with the torture being shown at the same time.

The rest of the film is not much better, and Gin does little to liven up the proceedings, even the shock scenes failing to register. While there is a fair amount of nastiness on display, Category III fans are likely to be left wanting, as the clumsy handling of any potentially gruesome scenes leaves them bereft of any impact they may have had in the hands of a more skilled director. Similarly, although the production values are unusually high, this merely leaves the film looking like some kind of bad-trip TV film more than anything else.

Making matters worse, Gin falls into the usual trap of mistaking neon lights for atmosphere and clearly feeling that character development and narrative pacing are unnecessary aspects of filmmaking. The best the film has to offer are a handful of scattered flashbacks that attempt to generate some viewer sympathy for Maggie, though these are so badly done as to be insulting in the worst soap opera style, and Michael Wong is given few chances to shine, which is a criminal waste in itself. Although the film is apparently more faithful to the real case than Human Pork Chop, this is mainly just down to the inclusion of the doll, and it’s certainly far duller, and events really drag, leaving the viewer begging for the dinner bell.

Overall, the battle of the two Hello Kitty cannibal murder films is won by Human Pork Chop, leaving There is a Secret in my Soup lurking amongst the dregs of the Category III genre. A poorly made and boring mess that clumsily aims for both titillation and horror, but which fails badly on both counts – not even ardent fans of exploitation cinema should bother.