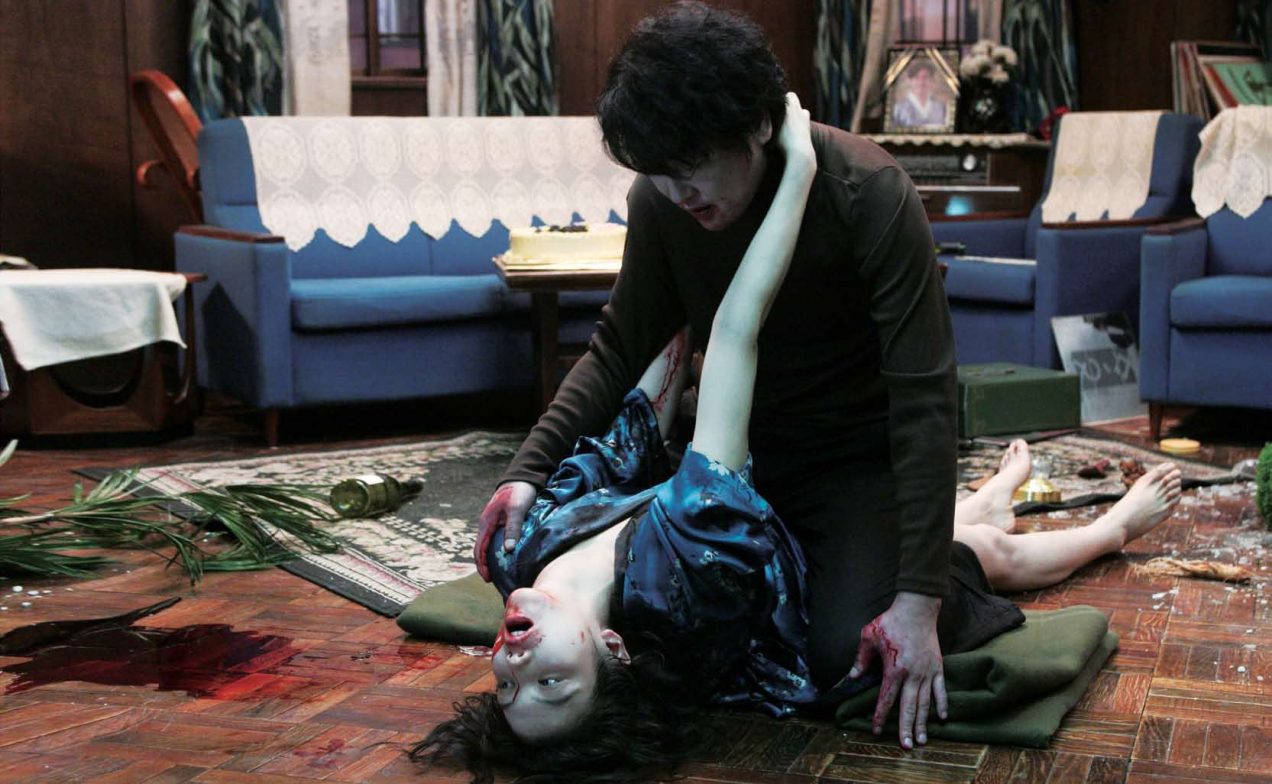 It’s been a couple of years since Park Chan-wook’s I’m A Cyborg, But It’s Okay opened to somewhat mixed reactions. His visually delightful, if rather offbeat romantic comedy failed to find an audience even in South Korea, let alone the rest of the world. Seemingly audiences want something more obviously sinister from Park – not that I’m A Cyborg wasn’t riddled with darker themes – and that’s just what he’s given them in Thirst…

The remarkably versatile Song Kang-ho, who appeared in Park’s breakthrough film JSA and Sympathy For Mr Vengeance, plays well-meaning Catholic priest Sang-hyun, a volunteer at a local hospital who decides to breakout of the endless cycle of human sadness by participating in an experiment to find a vaccine for the deadly Emmanuel Virus. The experiment fails, and Sang-hyun becomes fully infected with the disease, but after receiving a blood transfusion to save his life he finds he begins to recover astonishingly quickly.

News travels fast of Sang-hyun’s recovery, with devout parishioners camping outside church grounds, convinced he has great healing powers. Meanwhile the true nature of his recovery soon becomes clear as he finds himself drawn to human blood, and without it his virus quickly relapses. During this time he meets an old, childhood friend Kang-woo (Song’s co-star in JSA and Sympathy Shin Ha-kyun) and becomes attracted to his downtrodden wife Tae-joo (Kim Ok-vin, Dasepo Naughty Girls, Voice/Yeogo gwae-dam 4).

That attraction soon grows into an affair between the two, but as Sang-hyun’s desire for Tae-joo grows, his hold over his own personal morality and the bloodthirsty urges he can only barely keep a hold on blurs, and he soon succumbs to the sins of the flesh…

Park describes the film as being some 10 years in the making. Initial sketches that Park had inspired a the central notion of a Catholic priest turned into a vampire, but it was an idea to marry these with Émile Zola’s 19th Century novel Thérèse Raquin that enabled him to bring Thirst to the screen. Oddly, if anything it echoes Sympathy for Mr Vengeance, and those recurring themes of the moral innocent, in this case the priest, corrupted by events and manipulation. The major difference being the redemption that was rarely a part of his earlier films.

After the ocular overload of I’m A Cyborg (which I highly recommended to anyone in the film or advertising media – those of you who haven’t already ripped it off – even if you can’t dig the rom-com elements) in comparison Thirst is a remarkably stripped down affair, even though Park once again collaborates with cinematographer Chung Chung-hoon, who’s been involved in every feature the director has made since Old Boy. If anything, the one thing it most obviously has in common is a more developed sense of Park’s black humour.

Around the grimly unpleasant, gory goings on Park drops in plenty of on screen laughs. Somehow the mix of ‘bodyshock’, almost David Cronenberg-esque horror – played up well thanks to a keen ear for unpleasant, gut-wrenching sounds – makes for an occasionally queasy watch. (Let’s face it – it’s not like Park Chan-wook has been known to pull back from what he shows on screen.) And yet it’s also often hilarious!

This time Park’s focus is far more on a simple telling of the story itself, rather than using flashy techniques or surprises. There are no flashbacks, for the first time since Sympathy For Mr Vengeance, and no last-minute reveals. The movie seems desaturated, under designed and almost as if it was filmed on a 70s film stock, but is still typically arresting. Park appears to have stripped the film of self-conscious effects to counter to the fantastic nature of the plot.

(Indeed, easily the least successful scene of the movie is the overly CGI’d scene where Sang-hyun chases a newly ‘turned’ Tae-joo leaping over the rooftops of the town. Again, the preposterous scene plays straight into a heightened awareness of Park’s humour, yet is utterly incongruous with the minimalist approach of the rest of the film. I hate the way human forms are animated in CGI!)

The lightness of touch is greatly helped by a fantastic ensemble cast including sterling performances including Kim Hae-sok as Tae-joo’s mother in law; Song Young-chang as Seung-dae, an aging Police chief and family friend (who appeared as Sang-ho’s marvellously overbearing bully of a boss in The Foul King); Park In-hwan (The Quiet Family) as blind mentor priest Noh; and Oh Dai-su. It allows Park to use fleeting glances to imply the back-story behind the characters without explanation, and just like that lack of flashbacks, he never feels the need to spoon feed the audience with a full explanation of what happen to Sang-hyun in the first place.

Oddly Tae-joo’s ‘godless’ character is ultimately without boundaries, she enjoys the full potential of her new-found powers with no boundaries, but Park’s sympathies seem to lie with Sang-hyun. There’s an implication here that you need faith or a religion to keep you in line? Her character’s manipulation of Sang-hyun echoes that of Kim Novak over James Stewart in Vertigo, or even Richard Todd’s deception over Jane Wyman in Stage Fright.

Coincidently a companion piece of sorts to Tomas Alfredson’s Let The Right One In – Park is keen to point out that he wasn’t aware of the resurgence of Vampires as a popular theme (don’t even think of mentioning Twilight!) – it mirror that films deconstruction of the vampire myth. Both owe much to the more adventurous, independent horror of the 70s. Films like George A. Romeo’s Martin and Kathyrn Bigelow’s Near Dark spring readily to mind, though– as we’ll reveal in our interview later in the week – it was a lesser-known film from the 80s that influenced Thirst.

Once again this is a fine piece of work from Park, and worthy of an audience beyond Asian film fans. My one criticism is that my sympathies don’t connect the characters, particularly the lead Sang-hyun, in the way that I’d ultimately hope they would. It’s surprising, considering that it’s Song Kang-ho, undeniably one of the finest actors in film today. Not sure why….

But this is still a ‘must-see’!

Thirst is released in UK cinemas on Friday 16 October, with a DVD and Blu-ray release early in the new year from Palisades Tartan.