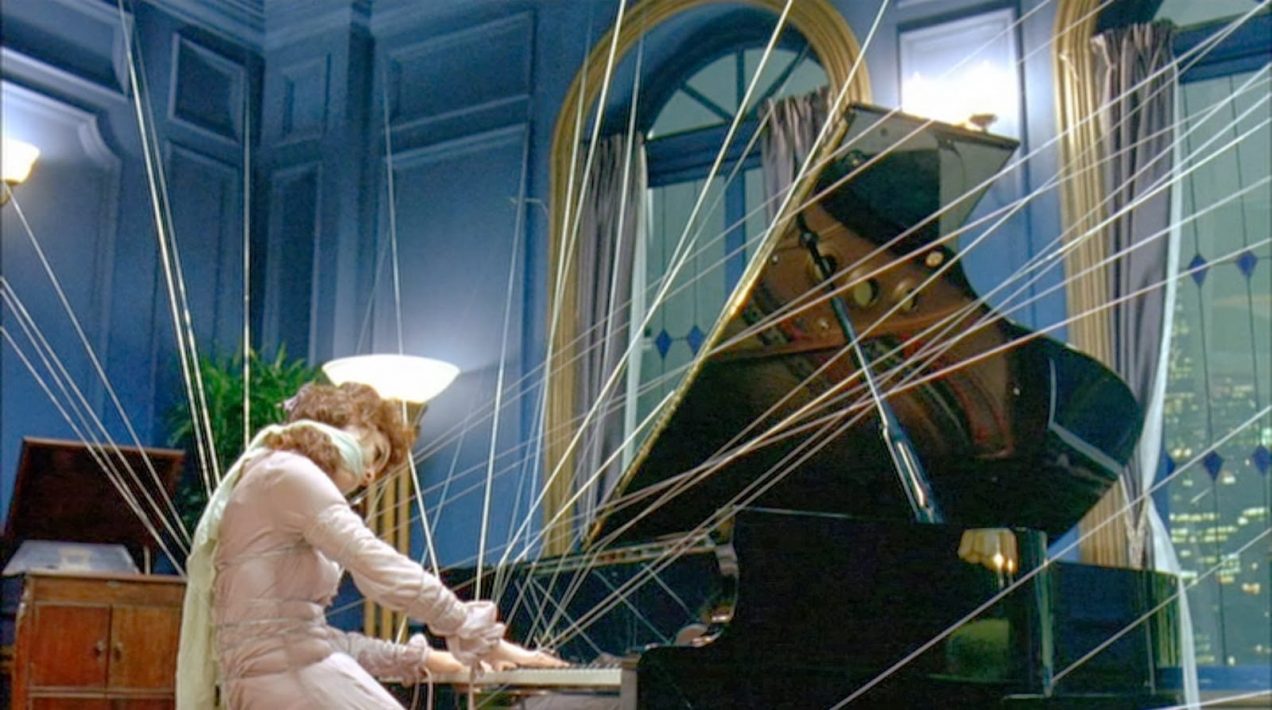 From the producers that brought us Three comes another trio of horror stories by well known Asian directors, this time featuring Fruit Chan, Park Chan-wook and the irrepressible Takashi Miike. Interweaving throughout out the tales is the subject of performance, both in front an audience, and behind the camera.

In the first segment, we find a once famous actress Ching (Miriam Yeung) in search of Aunt Mei (Bai Ling), whose tasty(?) treats – dumplings made from foetus – contain the secret of youth. But as she grows impatient for results, just how far is she willing to go, and at what price?

Fruit Chan’s ‘Dumplings’, originally released as a feature length film itself, fares badly wedged in to a half hour time slot. If the original didn’t quite fulfil the potential born out of it’s themes – the desperate clambering for youth in modern culture, the westernisation of this aspiration, the satiric comment that this elixir was mainly sourced from unwanted children in Mainland China (much of which still under one child rule) – then this version cuts that subtlety entirely. For instance, the growing friendship between the leads, despite their vastly different backgrounds, is lost entirely, as is much of Tony Leung’s role.

Perhaps the only saving grace is that this version differs from the original, winding in a whole new twist that, if anything, gives a far more satisfying (though incredulous) conclusion to the film. It’s shows us exactly how far Ching is willing to go to hold on to her youth.

In Park Chan-wook’s ‘Cut’ a successful director (Lee Byung-hun, My Bittersweet Life) gets on the wrong end of every directors worst nightmare, an extra with a grudge. In this case, it seems an extra’s (Won-hie Lim) only beef is that he seems too nice. He wakes to find his wife strung up like a puppet to a piano (in a gruesome manner, reminiscent of Dairo Argento) while having her fingers chopped off one by one, while attached to the wall by an oversized elastic band, his wife painfully just out of reach. How long will it be before the director shows us just how nasty he can be?

Chan-wook’s contribution pays knowing reference to his own success, making you wonder if this could be more than partly based on autobiographical experience. It displays the same streak of black humour that would later fill Lady Vengeance and I’m A Cyborg, Chan-wook’s film both amuses and repulses in equal measures. His intention seems, as with Sympathy For Mr Vengeance and Oldboy, to subvert the middle class, ‘nice’ lead and their world in comparison to those less fortunate, that somehow seemingly nice people can do (or can be made to do) some very nasty things.

A beautiful and impressively produced featurette, Chan-wook’s film is perhaps the most successful here.

Finally the notorious Takashi Miike gives us the final offering in the trilogy and perhaps the most unsettling – but not for the reasons you might expect from him.‘Box’ tells of a young author, Kyoko (Kyoko Hasegawa) plagued by nightmares of being buried alive, and seemingly repressed memories of performing with her deceased sister and father. Whether real or not they seem intent to break into her present life.

Surprisingly restrained for Miike, the segment slowly builds on it’s unsettling atmosphere without need of any real gore or cheap shocks. Indeed, it’s only the payoff to the story, with something of a laughable twist, that fails to convince.

If none of the stories quite achieve the heights of the original Three’s ‘Going Home’ segment, then combined they make a more impressive and undoubtedly worthy follow-up.

Good transfer of picture and sound, this DVD offers slim pickings in the way of extras, including a ‘Making of’ documentary.

This release misses out on the trick the US Lionsgate 2-disc DVD used, including the full-length version of Dumplings.