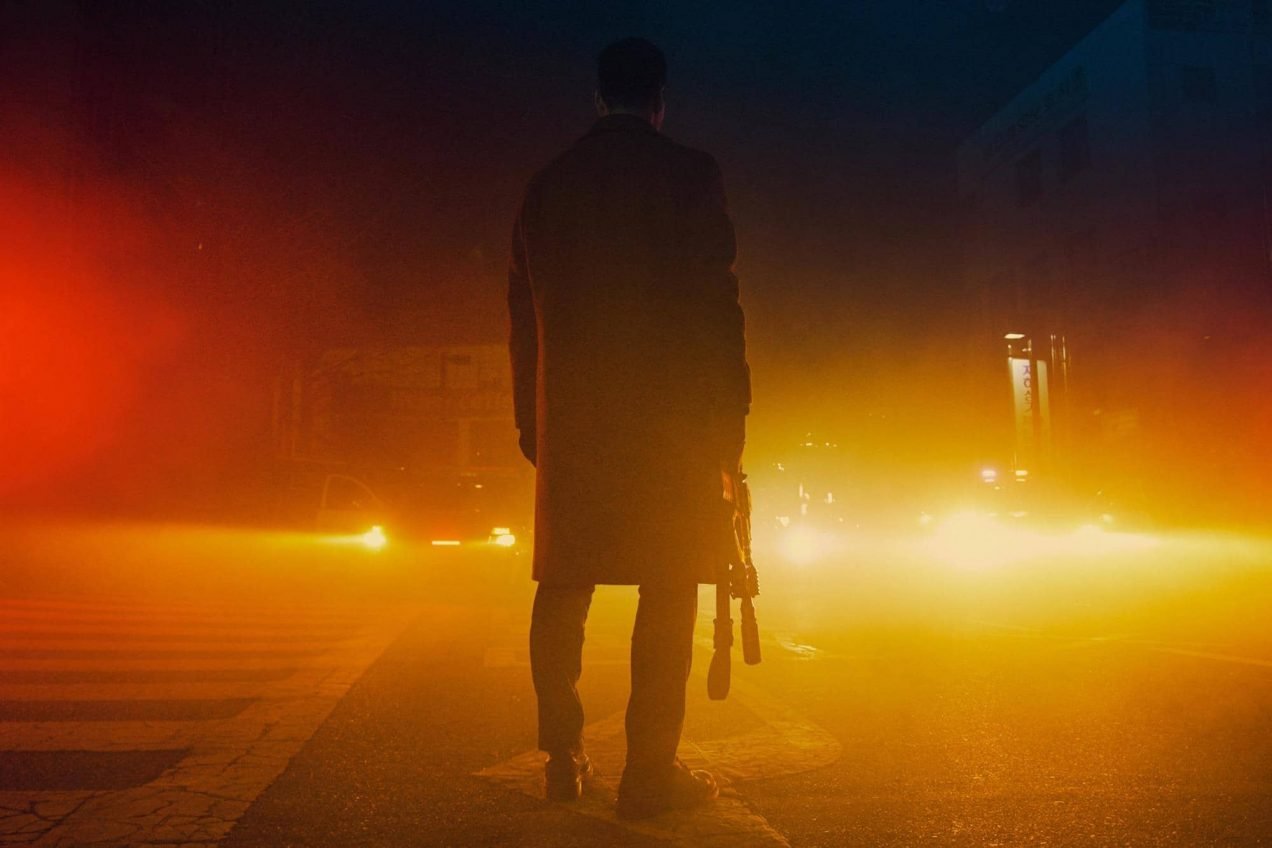 In a dystopian Korea of the near-future, four young criminals are hunted by a ruthless killer…

It’s been nearly a decade since Korean writer-director Yoon Sung-hyun made his feature debut with his graduation project Bleak Night, a dark coming of age drama which won him widespread praise and a number of awards. Yoon finally now returns with Time to Hunt, another film following a tightly-knit group of young men finding themselves in dire straits and looking for a way out, this time taking more of a thriller approach. The film sees him reteaming with Bleak Night actors Lee Je-hoon (The Phantom Detective) and Park Jung-min (Svaha: The Sixth Finger), joined by Ahn Jae-hong (Microhabitat) and Choi Woo-shik (Parasite) as the group of four friends, with Park Hae-soo (The Pirates) as the ruthless killer stalking them. Following its premiere at the Berlin International Film Festival, the film made the headlines after the COVID-19 outbreak delayed its Korean cinema release indefinitely, complicating its planned global Netflix rollout and leading to legal issues before it finally landed on the platform on April 23rd.

The film is set in Korea in the near future, with the country in a state of financial ruin following the devaluing of its currency by the IMF, resulting in widespread hardship and lawlessness. Just released from prison, Joon-seok (Lee Je-hoon) has a plan to escape the country and move to Taiwan, though unfortunately is greeted with the news that the money from the last job he did with friends Ki-hoon (Choi Woo-sik) and Jang-ho (Ahn Jae-hong) is now effectively worthless. Working with inside man Sang-soo (Park Jung-min), Joon-seok hatches a scheme for them to rob an underground casino, though unfortunately while the heist goes surprisingly well, they also make off with a collection of incriminating surveillance tapes involving local mob figures. As the young men try to figure out an exit strategy, the gangsters enlist the services of Han (Park Hae-soo), a mysterious fixer who’s only too happy to kill them as well as retrieving the tapes.

One of the most striking and impressive things about Time to Hunt is the effort Yoon Sung-hyun puts into creating a believable and fascinating backdrop for the film, and though the story is set in the future, it’s very much driven by economic issues faced by Korea in the past and present. The empty, rubbish-strewn streets and abandoned shops, coupled with the anti-IMF protestors fighting with police see Yoon drawing upon the 1997 Asian Financial Crisis as well as the current disaffection and economic stress experienced by many Korean young people, and this works well to set out the motivations of his frustrated protagonists. The film also sees guns more readily available than in current Korea, and this similarly ups the overall sense of threat and anxiety, painting a picture of a society in chaotic decline, though without ever being heavy-handed or feeling the need to overexplain – there are a number of well-choreographed shootouts peppered throughout, more so than in most other Korean thrillers. This gives Time to Hunt more of a gritty, indie feel, with Yoon showing a fantastic use of light and colour and making the film both more grounded and more visually impressive than other thrillers of recent years.

At the same time, the film is somewhat at odds with itself when it comes to its young protagonists, as while their situation and worries are only too believable, their behaviour and decision making are inexplicable and frankly daft. Though it’s certainly fair enough to have a group of inexperienced thieves planning an ambitious heist, Joon-seok and his comrades are woefully incompetent, so much so that it seems rather a miracle that they manage to pull off the robbery, not least since they don’t seem concerned that they’re stealing from an underground casino. To be fair, Yoon does throw in some nods towards the fact that the four have done their military service, though for the most part they act and carry themselves more like actors who have wandered in from a K-drama, and this does detract from the suspense. A few decidedly left-field plot twists later on similarly don’t help in this regard, and the film does lapse at times into arthouse obscurity when it comes to the fate of certain characters as it builds to what feels like a rushed conclusion – the film does have pacing issues, with an overlong running time of two hours and fifteen minutes, and it’s hard not to think that it could be done with a bit of extra editing and refocusing.

Thankfully, Yoon has an ace up his sleeve in Park Hae-soo’s Han, an entertainingly vicious and inscrutable villain who effortlessly steals every scene he appears in, and whose presence looms large over the second half of the film. With there being little explanation as to why he behaves the way he does, or indeed who he really is, Han clearly enjoys the pursuit of his young targets, doing it largely for his own pleasure and driven by his own odd sense of sportsmanship. This makes him an unpredictable figure, and Yoon uses him to great effect, so much so that he becomes more interesting than Joon-seok and the others, and later plot developments do hint at what could have been a gripping backstory.

Despite its flaws, there’s more than enough here to make Time to Hunt well worth catching, especially given its availability on Netflix, and it marks a welcome return for Yoon Sung-hyun. Benefiting from some gorgeously downbeat visuals and mixing genre thrills with an indie sensibility, though undermined by relatively weak protagonists, the film has an awesome villain and really flies when it hits its stride – hopefully Yoon won’t take another decade to make his next film.

Time to Hunt is available to stream on Netflix.