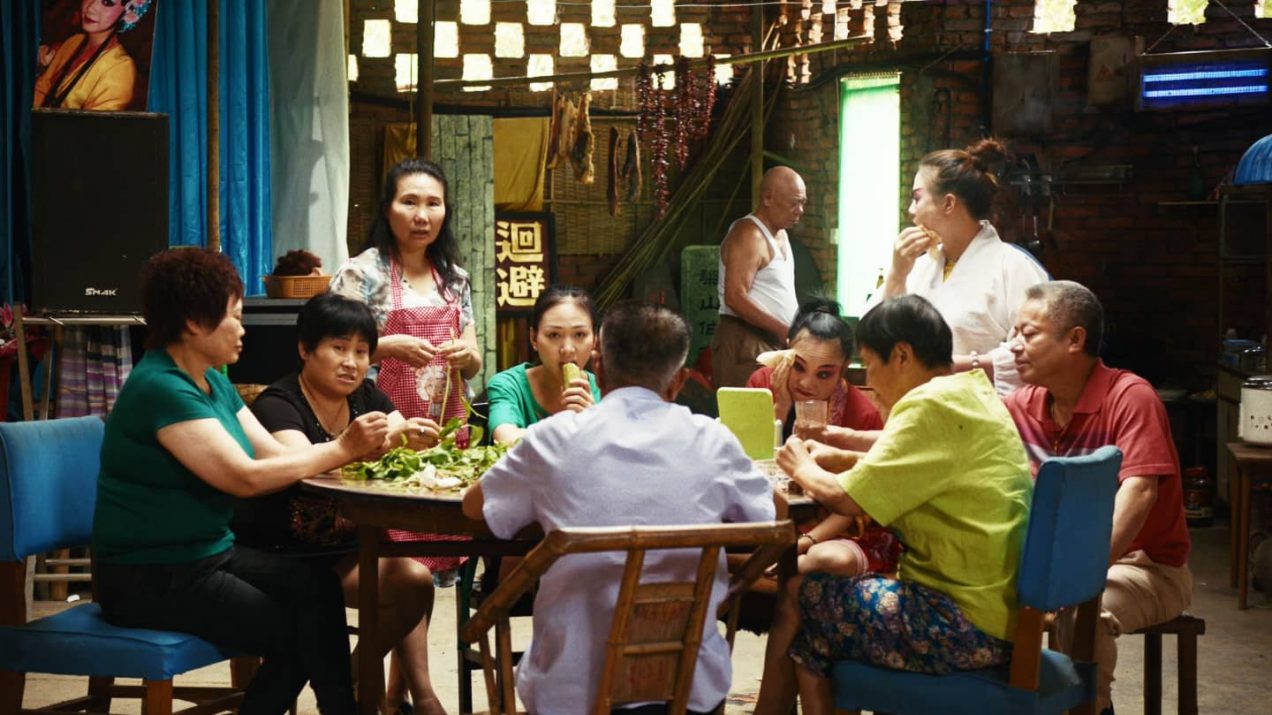 A love letter to the dying art of Sichuan opera, an older cousin to the better-known Chinese opera style from Beijing, Johnny Ma’s second feature focuses on a troupe being forced to extinction as the rundown areas of Chengdu are redeveloped. Using a cast of real troupe members, with Zhao Xiaoli a particular standout as the company’s matriarch, the film debuted in the Directors’ Fortnight at 2019 Cannes Film Festival, and has played various festivals including Shanghai International Film Festival (where Zhao rightly won Best Actress in the Asian New Talent Award), BFI London Film Festival and Five Flavours Film Festival.

Zhao Xiaoli stars as Zhao Li, leader of a troupe on the outskirts of town earmarked for demolition. The jaws of diggers literally at their door, and with their aged audience dwindling, Zhao struggles to find a new building they can actually afford. Instead, she hatches a plan to impress a local culture chief into saving them by putting on a show that no one will ever forget. But with members of the troupe finding better offers for their talents appealing to tourists at local restaurants, breathing fire or changing masks – including their main attraction, her niece Dan Dan (Gan Guidan) – will there be anyone left to star in it?

The second feature-length film from Shanghai-born, Canadian-raised filmmaker Johnny Ma could hardly be more starkly contrasting in tone with his debut Old Stone, albeit with some thematic similarities in dealing with faceless bureaucracy. Inspired by a fly-on-the-wall style documentary and its similarities to one of his favourite Ozu films, A Story of Floating Weeds, about a travelling Kabuki troupe, Ma sought to make a tribute to Sichuan opera. Though similar to its Beijing cousin, it relies more on singing, and is seen as being performed for the populous rather than court. In real life groups really do get pushed from one area to another, especially as prices for potential venues continue to rise.

The relationships here, portraying the troupe as both real and extended family, due to spending so much time living and working together in cramped conditions, are keenly observed. The approach is wonderfully candid, such as when the action cuts behind the scenes to a member in full dress, commanding two butterfly puppets on wires on stage as he puffs away on a cigarette. It would be easy to be dismissive, to say it merely comes from the fact they are real troupe members, but Ma’s writing seems to truly understand them as people. There are layers here: from the ridiculous, Zhao’s husband (Yan Xihu) obsessed with reliving his glory years under a youthful picture of himself ‘heroic bloodshed’ style posing with a gun; to the bond with her niece, who it’s revealed the couple have raised as their own. The performances are naturalistic without being awkward, both fun and heartrending, with Zhao Xiaoli real discovery here – as confident and engaging on-screen as she is on stage.

But that existence of a pre-existing film spurred Ma on to create something new, something more self-consciously ‘filmic’ with the material. With such a slight plot, Ma seeks to reset the film as an opera itself, with increasingly surreal flights of fancy and elements. The character Dwarf appears throughout. A representation of the Chinese folk deity Tudigong (an Earth God), he often leads Zhao to places where she makes revelations. In one scene an imagined modernisation of Sichuan opera turns into breakdancing against disco lights, which feels like a mashup of Jia Zhangke’s Platform and more recent shots of synchronised dancing seen in Mountains May Depart and Ash Is Purest White. In another, where the performance itself becomes a dreamlike confrontation in the underworld, set in the debris of buildings, it’s more like a subpar take on A Chinese Ghost Story. (Admittedly, in a way that any such sequence not managed by Ching Siu-tung would seem.) This magical realism often jars with the main narrative. More successful is the decision to use Bobby McFerrin’s Ave Maria on the soundtrack, which pushes towards a fresher take on opera than the typical traditional music and gong clashes.

All the while scenes of demolition and redevelopment are juxtaposed in a way that can’t help but be something of a well-trodden path in Chinese cinema, directly symbolising the loss of the past and traditions in the wake of near-feverish regeneration. It’s not helped by the fact that French DOP Matthias Delvaux (Old Beast) shoots these moments of destruction with such beauty, markedly in one dream sequence where the venue is seen torn down and exploding in extended slow motion, that it negates the emotions you should be feeling. But then the film seems to be fighting with itself on many levels: can you regret the passing of one tradition, if in the next you say it needs modernising to survive? (Perhaps pointedly, it seems Ma has nothing to offer that can best the Sichuan opera as it stands.)

In that preoccupation with not repeating the earlier documentary, Ma loses some of the human drama that could have made this film more poignant, more Ozu even, especially with such a talented cast. Yet To Live To Sing is still a fascinating insight into an opera troupe.

To Live To Sing screens as part of the Five Flavours Asian Film Festival 2019, taking place from 13 to 20 November.