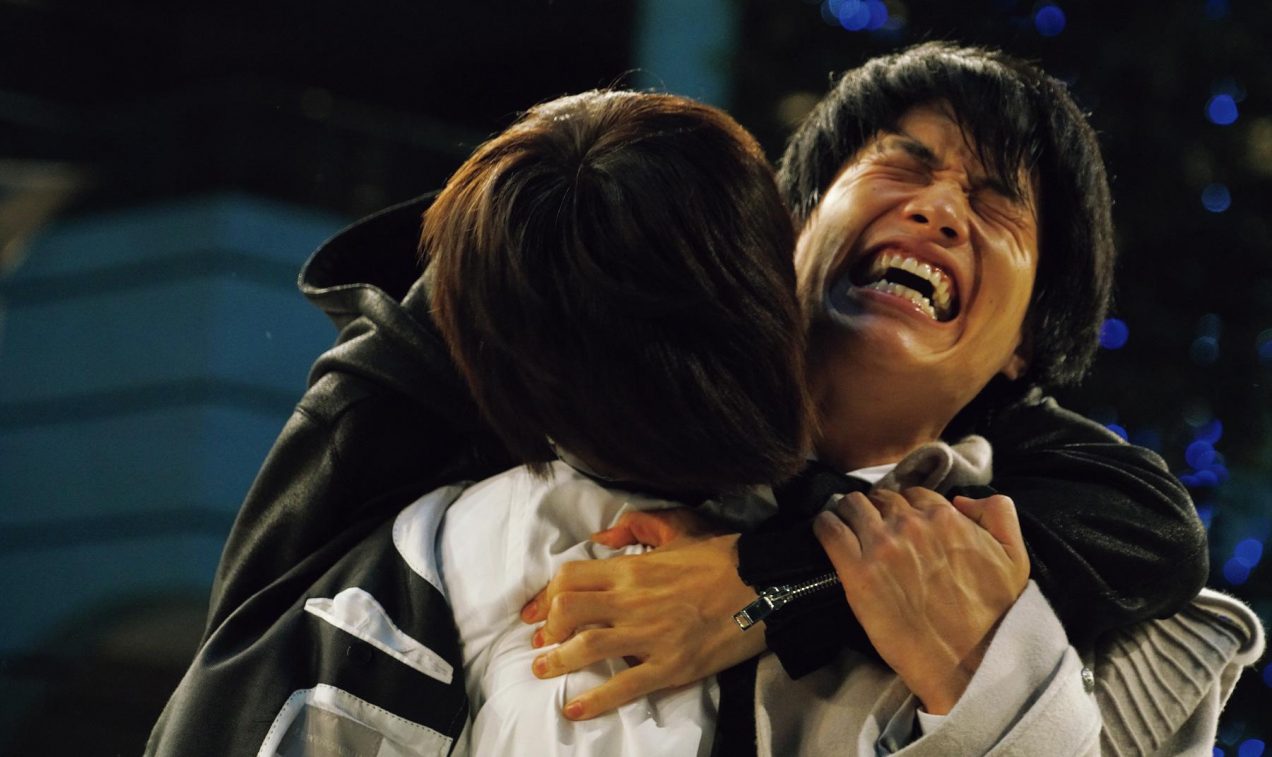 The latest Japanese big-screen live-action manga adaptation arrives in the shambling form of Tokyo Ghoul, based on the best-selling fantasy series by Ishida Sui. The film was directed by Hagiwara Kentaro, a marked departure from his 2016 feature debut, the drama Anniversary, and stars Kubota Masataka (familiar with manga after appearing in the Death Note TV drama) as a student who becomes half-human, half-ghoul after an attack.

Set in a Tokyo where attacks by lurking hyper-ghouls are an accepted part of daily life, the film follows dweeb college student Kaneki Ken (Kubota Masataka), who thinks his luck is in when he manages to catch the eye of his dream girl Rize (Aoi Yu, recently in the Rurouni Kenshin series). Unfortunately, their first date doesn’t go exactly as planned when she turns into a ghoul and tries to devour him, before being accidentally crushed to death. Ken survives, though is given Rize’s organs in a transplant operation, inheriting her powers and turning him into a half-ghoul, complete with one red eye and a hunger for human flesh, leaving him understandably dismayed. Fighting his appetite, he finds shelter with a bunch of friendly ghouls running a coffee shop (the only human substance ghouls can ingest that doesn’t taste of rot), including the standoffish Toka (Shimizu Fumika, also in the more debauched manga adaptation HK Hentai Kamen and its sequel), who eventually agrees to train him and help him adjust to his new life. Meanwhile, the ghouls are being hunted by the crazed Mado Kureo (Oizumi Yo, Fullmetal Alchemist) and his assistant Amon (Suzuki Nobuyuki, from the High & Low franchise) from the government’s Commission of Counter Ghoul, whose ruthless tactics target even the most innocent of the creatures.

Even for those unfamiliar with the source material, the plot of Tokyo Ghoul is pretty generic stuff for a manga adaptation – nerdy boy is blessed/cursed with destructive powers and battles a series of enemies, leading to a boss fight and some manner of self-discovery while learning to talk to girls. Thankfully, though it resembles a number of other manga films, Yamazaki Takashi’s 2015 adaptation of Iwaki Hitoshi’s Parasyte in particular, Tokyo Ghoul remains fun while carving out somewhat of an identity of its own. The basic premise of the ghouls, essentially a Resident Evil zombie/vampire-type hybrid, complete with wild mutant battle appendages that burst from their bodies, is a decent one, and Hagiwara Kentaro manages to come up with an origin story that’s both accessible to newcomers and which should still please fans of the manga. There’s plenty of over the top dialogue, special effects, action and battle scenes, and the film feels brisk and unpretentious despite its two-hour running time, and although Hagiwara shies away from graphic depictions of dismemberment and mutilation, a great deal of blood is certainly spilt and sprayed.

What might prove more divisive is the protagonist Ken, who here in the live-action adaptation is rather a blank, going through a straightforward journey from wimp to super-powered ghoul without much in the way of conflict or personal development. To be fair, it was always going to be more difficult to replicate the character’s internal dialogue in a film, and Hagiwara does try to indicate inner turmoil by having Kubota Masataka spend most of his ghoul scenes shrieking and crying, something which at least suggests he’s not exactly happy with his newfound desire for flesh. On the plus side, this means Tokyo Ghoul is also free from the kind of ‘what is humanity’ type speeches this kind of film can be prone to, and though there’s an obvious comparison drawn between the nicer ghouls and the monstrous methods of Mado Kureo, there’s nothing too heavy-handed or pompous. The fact that the supporting cast are all likeable also helps, and the film gets some emotional mileage and comedy scenes from Toka’s efforts to try and fit in with normal society.

Where the film stumbles is Hagiwara’s direction, which often seems uncertain and clumsy, in particular when it comes to the action scenes. Though the special effects are fine, the combat, and indeed the film in general, suffers from some odd editing choices, cutting away in a confusing manner that leaves the viewer uncertain what has happened, lessening the impact of many of the set pieces. This is really a shame, as the film obviously enjoyed a respectable budget and looks good throughout, more so than some others of its type, and a bit more effort in the editing room might have lifted it up another notch.

Still, though flawed, there’s a lot to like about Tokyo Ghoul, and it’s easily one of the better films in the never-ending stream of manga adaptations. Ticking all the right boxes and serving up a healthy mix of outlandish action, angst and blood, and it’d be interesting and by no means unwelcome to see where any continuation of the live-action incarnation of the series might go from here.

Tokyo Ghoul is available from YesAsia.