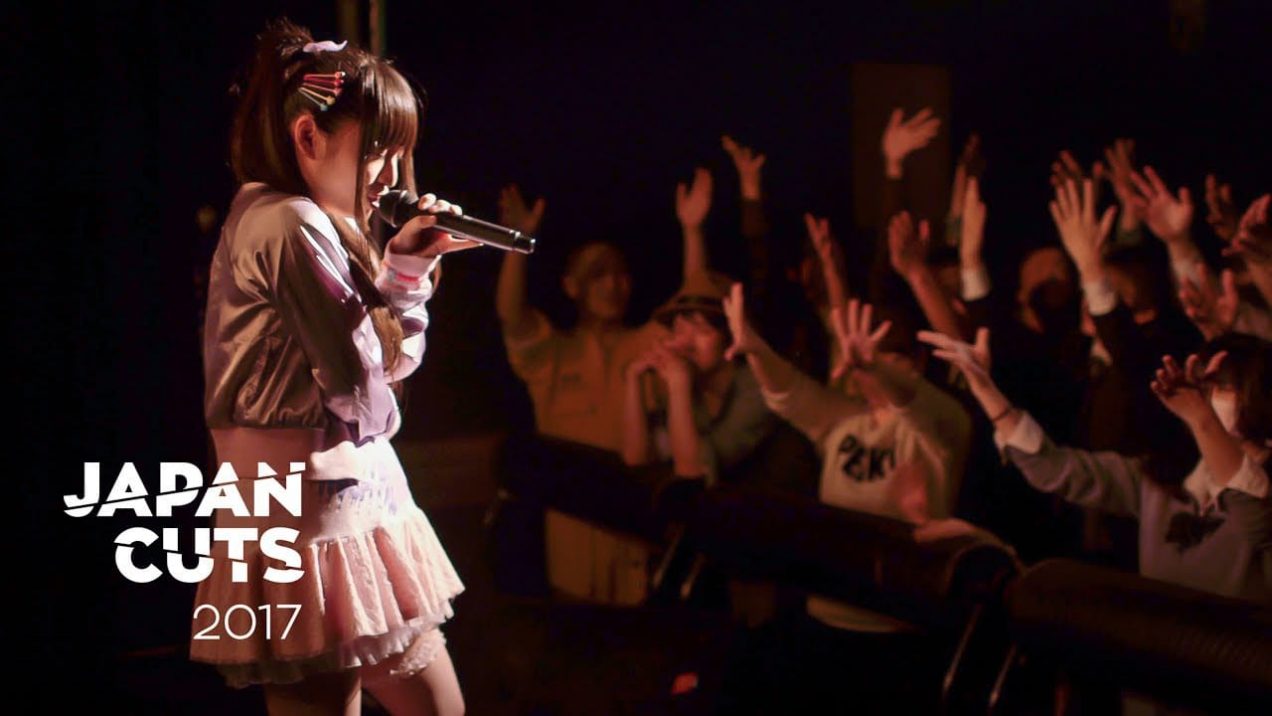 At first glance, Tokyo Idols story seem simple. It focuses on the underground idol scene in Japan, where girls ranging from preteens till early 20s are performing to the room full of middle-aged men. These stars are often self-made, building up their fan base through small concerts, social media, livestreaming, “meet & greet” events when in highly controlled circumstances fans have a chance to pay for shaking idol’s hand and chat for few minutes. Followers mainly comprise of otaku – people with obsessive interests, who often alienate themselves from the outside world and others. Originally otaku was a sort of stigmatized subculture, but gradually it turns into more and more socially accepted mainstream. Tokyo Idols is not an average music documentary, it digs deeply into complex gender relations in Japan and the way women and men perceive themselves without being judgemental or attempting to pose some sort of definite, pessimistic social diagnosis. It is all hidden between the lines, however creepy the story would be.

Tokyo Idols main character is one of the self-made idols, Rio Hiiragi, whose dream is to become a mainstream singer. Film shows her daily schedule, when she prepares shows, livestreams, sells her merchandise, performs and goes to “meet & greet” events and even sets out on a tour travelling to various cities all over Japan to connect with fans and publish footage from her journey online. Documentary introduces idol’s fan base, especially focusing on Koji Yoshida, most devoted follower, who was with Rio since the beginning of her career. Moreover film features interviews with few other idols, their parents, then experts from academia and industry. As far as documentary form is concerned, it is quite classic, narrative tries to stay impartial, focusing mostly on interviewees’ answers, showing different points of view. Main goal is to present full scope of the idol music scene, rules and behaviour within its community, which reflect great divide between genders.

Tokyo Idols mainly focus on the dynamics between male fanbase and female performers. Both of the sides are explaining personal motivation behind being part of idol scene and their attitude towards each other. Most fans are average men, working in sales during the day, prone to boss’ and customers’ aggression being taken out on them. Nevertheless after hours, at the concerts or fan events, they join the community which give them sense of belonging and being loved and accepted. Other men do share similar experiences of living an average life in the Japanese society, where people are being constantly judged by others when they do not meet the expectations as a husband, father and worker so there is huge pressure on economic and social status. The only way out is to run away, idols’ fans chose to escape into the world of fantasy and eventually build a community where they feel comfortable and united, dancing together, collecting idols memorabilia, just hanging out offline.

Things get complicated and more twisted when it comes to male-female relations, as Tokyo Idols show there seem to be some basic misunderstandings and preconceptions on the account of lack of honest communication between genders. Film director, Kyoko Miyake, admits that it was better that she left her home country and the crew was not based in Japan, because it helped to look at the issue with critical distance and not take it personally. Yet still while filming it was hard for her to bear the sexism and misogyny within Japanese society, where the demand to follow strict gender rules seem to prevent people from forging honest bonds between sexes. There is huge economic pressure on men if they want to start a family, in addition to generalizing, stereotypical supposition that all women only care about money. So instead of sustaining committed relationship with grown up women, some men chose idols – girls who adore them unconditionally and equally, entertain them, fulfill romantic fantasy about obedient, vulnerable, innocent but virtuous and hardworking ideal of a female.

In Tokyo Idols the sexual context might be offputting at first, because middle-aged men are fascinated by young girls, sometimes preteens. It comes to light especially during the “meet & greet” events when some fans consider handshake as having sexual aspect. Huge distance between genders in Japanese society devoid people of physical contact that is so deeply needed, men start to consider real women as literally unattainable. Tus they chose to live within their imagination. Consumption of the fantasy is easier than a relationship, because rules of conduct are clearly outlined by price list just as during “meet & greet” events.

In Kyoko Miyake’s documentary women are successful, self-made entrepreneurs, confident and hardworking, pursuing their goal which is to support themselves independently, outside of the family structure, which in Japan and East Asia is one of the regimes of power, as Michel Foucault[1] (1979) called them, because they seek to objectify, discriminate, and normalize power relations. For Rio becoming an idol meant escaping the life in small town and relying on her parents who would eventually decide about her future. Instead Rio took the matters in her own hands and started working. The social media for her offer the possibility to make money on her own, avoid the restraints posed by music industry, which exploits the performers. So Rio Hiiragi does “Rio Hiiragi”, she invented herself as a star, her public persona blends reality and fantasy thus fuelling the interest of men. There is something liberating in idol scene, as women rebel against family and corporate structures, even though they have to comply to sexist image that the Japanese media, especially manga culture, impose on women. One of the experts compare idols to punk scene in the 70s, as there is DIY spirit to it, which creates grassroots community.

One thing that the Tokyo Idols lacks is insight into Rio’s relation with her otaku fans after she slowly broke into a mainstream media. Is the bond between two people, an idol and a fan, a long-lasting one or easily changeable according to situation? Fans do objectify idols, treat them as some sort of tokens within their community, favorite one completes fan’s identity. The ending left the feeling of being a bit incomplete, but it is nothing comparing to the broad range of issues mentioned in the documentary.

Tokyo Idols, regardless of the complex subject it tackles, remains non-judgemental and avoids easy answers. It also refers to recent debate about gender inequality in media and film industry. When female filmmakers are active within documentary and TV productions, fiction films, especially mainstream, is male dominated. And no, Wonder Woman, as of its narrative, did not help. Tokyo Idols then becomes a documentary that reflects the spirit of time, not only in Japan but worldwide.