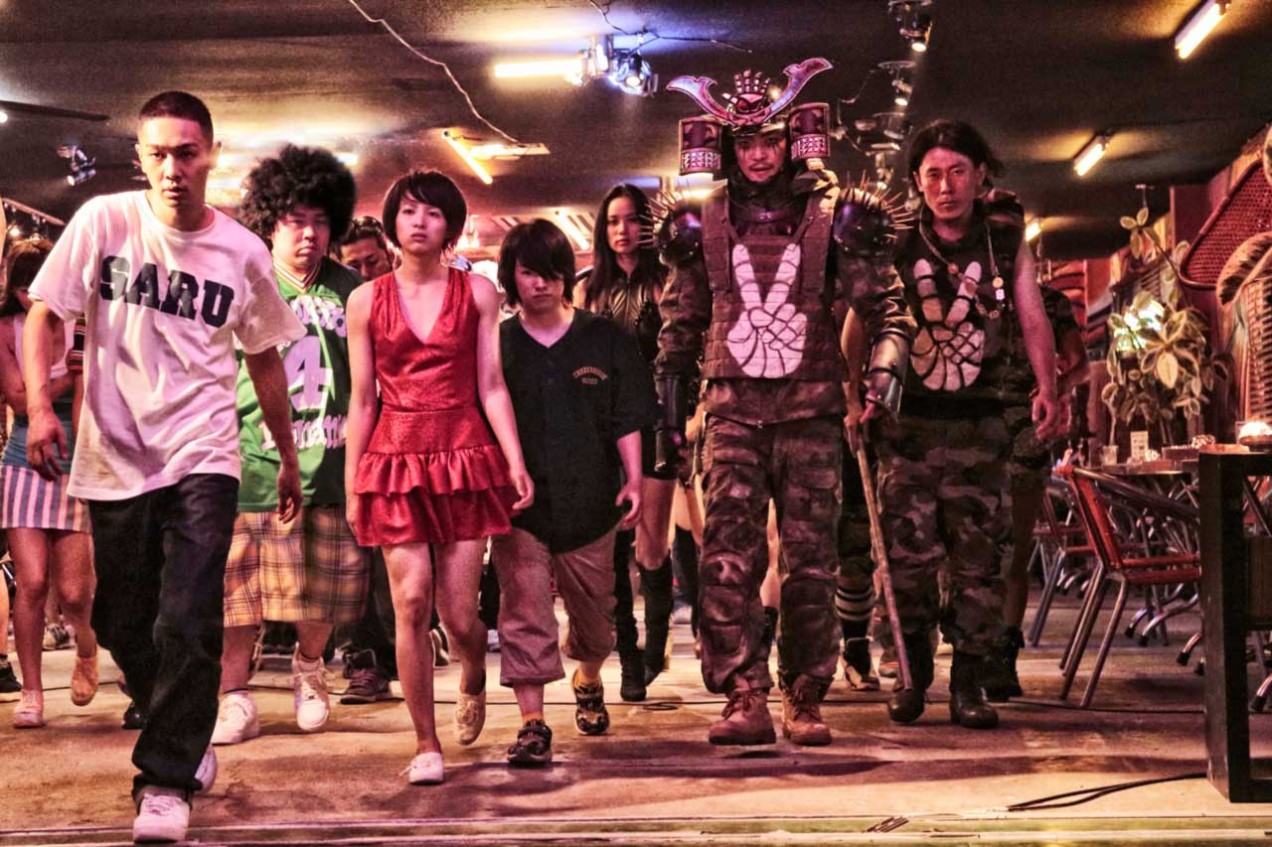 Sion Sono returns with one of the year’s wildest films: a Japanese hip hop gang musical…

Cult Japanese director Sion Sono returns to blow minds and speakers alike with Tokyo Tribe, a bold, brash hip hop musical told in his inimitably perverse poetic style. Based on a 1997 manga by Santa Inoue, actually the second in the series, the film sees Sono following last year’s Why Don’t You Play in Hell? with another wild, violent and colourful mix of genres, forms and cinematic techniques, subverting expectations and continuing to mark himself as one of the country’s most distinctive directors.

The film is set in a vaguely futuristic Tokyo years after the Shibuya riots, the city divided up into a series of territories by gangs who keep to their own areas in the name of a fragile truce. An incident involving the peace-loving Musashino Saru and the brutal Wu-Ronz tribes changes everything, giving the evil Buppa (Takashi Miike regular Riki Takeuchi) the chance to try and seize power for himself – Buppa’s psychotic Wu-Ronz henchman Mera (Ryohei Suzuki, Gatchaman) is only too happy to oblige, desperate to even the score with former best friend Kai (real life pro rapper Young Dais, aka Daisaku Shimada), and the city is soon torn apart by all-out war. Meanwhile, a mysterious and seemingly innocent young woman called Sunmi (Nana Seino, also in the excellent though sadly not widely seen Ku_on) is snatched from the street by the Wu-Ronz and forced into prostitution, while a street kid (Makoto Sakaguchi) tries to free her, the two getting caught up in the struggle between Mera and Kai.

On paper, the idea of a Japanese rap epic might sound suspiciously like a spoof or some kind of cultural pastiche. However, though Tokyo Tribe is fantastically over the top and might well come across as being tongue in cheek, Sion Sono certainly took the film’s hip hop elements seriously, engaging the services of the Japanese CDMG (Big Crow Dog Music Group) and with a great deal of work having gone into the dialogue and lyrics (and thankfully into the English subtitles). Along with the usual dash of Beethoven on the soundtrack, while not every line is delivered in verse, the rap comes thick and fast throughout and once the initial fears of gimmickry have passed works very well indeed. Performed by a mix of professionals and a game cast of actors and actresses trying their best to keep up, the standard of delivery unsurprisingly varies, though there’s a definite and genuine feel for the musical form here, and an exuberant celebration of it as a storytelling technique, amplifying and exaggerating the more excessive aspects of its associated culture and trappings to glorious effect.

Of course, as a Sion Sono outing the rapping is only part of the film’s uniqueness, working in gang battles, martial arts, torture, nudity, rape, Satanism, cannibalism, human furniture and unexplained earthquakes into a mad though oddly coherent and upbeat tale. Quite likely to offend or baffle some viewers, the film has an unhinged tone that veers from comedy and romance to vicious misogyny and machismo-mocking penis gags, equal parts West Side Story and A Clockwork Orange, with elements of The Warriors and other gang actioners thrown in for good measure. Some bizarre performances from the flamboyantly costumed cast add to the madness, and special mention has to go to Riki Takeuchi for a scene-devouring turn that at times really defies belief. It’s a chaotic, heady brew that bounces along at a hectic pace, Sono’s lurid palette of day-glo colours and post-apocalyptic punk set design combining with the constant beats of the loud soundtrack to make for a unique and searing cinema experience – definitely a film to catch on the big screen if possible.

Tokyo Tribe is another hyper-confident piece of film making from Sion Sono, and one which sees him furthering the deranged passion for life, pandemonium and cinema shown in Why Don’t You Play in Hell?. Embracing the absurd with conviction and artistry, there’s a powerful sense of hope and self-belief to the film, and while whatever themes and messages it may or may not possess are up for debate, there’s no denying it as an intense and rousing work that’s almost participatory in its infectious lunacy.

Tokyo Tribe screens at the New York Asian Film Festival 2015, and is released in the UK by Eureka Entertainment on Blu-ray and DVD.