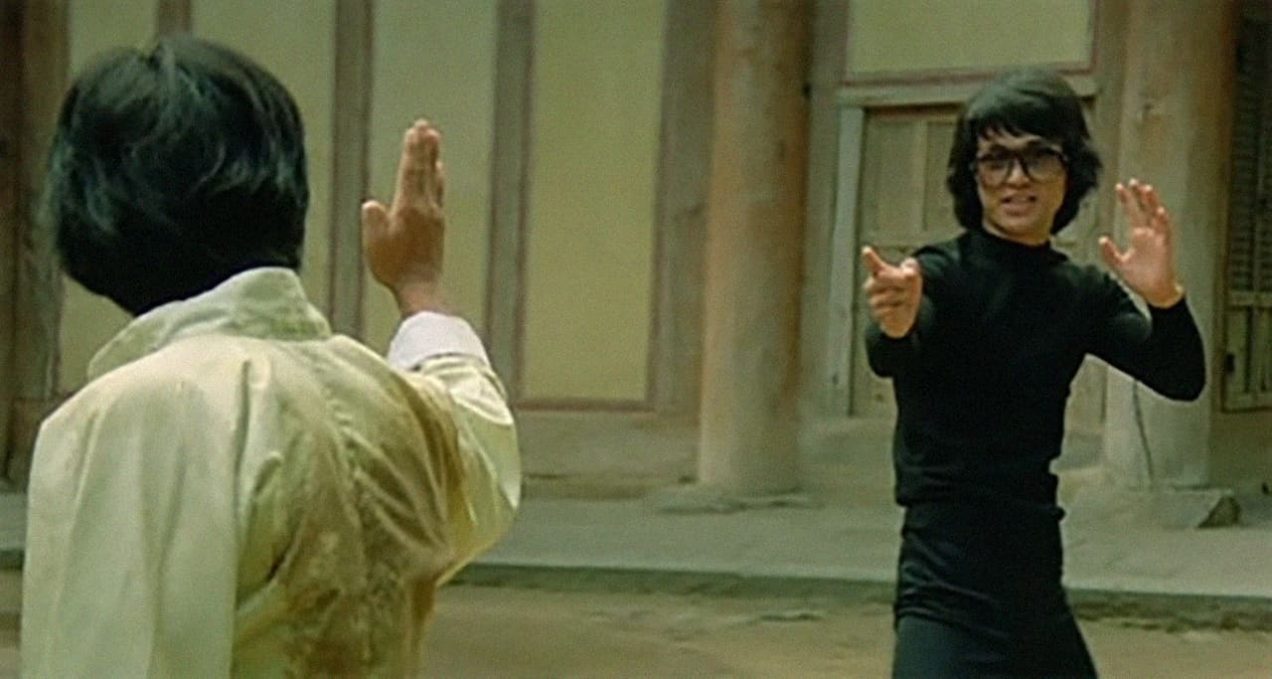 Don’t fear the peacocks… Ng See-yuen takes the director’s chair on this sometimes bizarre and often unintentionally funny Bruce Lee cash-in. Baffled? You will be…

Never let it be said producer/director Ng See-yuen ever looked a gift horse in the mouth. Or some unused Bruce Lee footage. The story goes ‘N.G.’ signed on to use the remaining footage of Bruce Lee left behind from Robert Clouse’s Game Of Death. Footage Lee had shot for Tower of Death before stopping to make Enter The Dragon, and his untimely death shortly afterwards. Only to find of the 40 odd minutes that had been completed, it had ALL been used already, in a much-edited form. Reduced to less than 15 minutes in that film, the fantastic full-length fight sequences weren’t made available until the release of the Hong Kong Legends special edition DVD. Having performed such a great service, they obviously thought they could sneak this out on us, too.

Bruce Lee, mainly doubled from the back by Tong Lung as he did in Game Of Death, is Chen-Chiang, a martial arts master who is mysteriously murdered trying to uncover the sudden death of friend Chin Ku (played by ubiquitous Hong Kong bad guy Hwang Jang Lee). This snaps Chen-Chiang’s brother Chen-Kuo (again played by Tong Lung) out of his lazy, womanising ways and on to the familiar path of revenge, remarkably also becoming a great kung fu master in the process.

This leads to an eccentric westerner and associate of Chin Ku, Lewis (Roy Horan), who proves his mastery of kung fu by showing his control over peacocks, not that he seems to be able to get them to do much. (A scene baffling played against creepy music, prompting viewers expectations of a The Birds type scenario which sadly never comes.) He also keeps lions in the grounds of his castle, eats raw meat and drinks pigs blood, maintaining that a truly great fighter must have the ferocity of a lion and the agility of a peacock (The peacock being well known as one of the animal kingdoms most agile creatures?)

To find the truth Chen-Kuo must find the Tower of Death, a legendary pagoda whose location has remained a secret due to it being built upside down into the earth. (Neat idea that sadly looks more like a Bond set on a shoestring!) But who could the evil mastermind behind this possibly be…?

With no footage left from Bruce Lee’s Tower Of Death ‘N.G.’ had to rely on outtakes and sometimes even previously shown footage from other Lee movies. These clips include the shots of Bruce chatting with the monk only recently reinstalled into Enter The Dragon (in the special edition) and other shots that were never included. For the main part these notably jar with the new material, even when some of the original actors have been used, though there’s nothing as jaw-droppingly bad as the ‘photo on a mirror’ scene from the original Game Of Death.

There are plenty of great fights to fall back on, all courtesy of action director Yuen Woo-ping (The Matrix, Crouching Tiger Hidden Dragon, Drunken Master). Intricately choreographed scenes that more reflect his style – as seen in the Ng See-yuen produced Drunken Master and Snake In The Eagle’s Shadow – than that of Lee.

Tower Of Death is an enjoyable mess, mainly because it’s so unintentionally amusing. It’s easy to see how fans would have wanted to see any unseen footage of their idol, however shameless the cash-in. They still exist to this day thanks to Lee’s evergreen popularity, and with talk of Lee’s family having given permission for his image to be placed into a new film using CGI – it doesn’t look like it’s going to change anytime soon!

Great remastered and restored transfer, special features include a commentary by Bey Logan and co-star Roy Horan, interviews, photo gallery and deleted footage from the international print (which includes a scene from the Hong Kong print of Game Of Death!)

Another excellent effort by Hong Kong Legends but this time for a rather unworthy film.