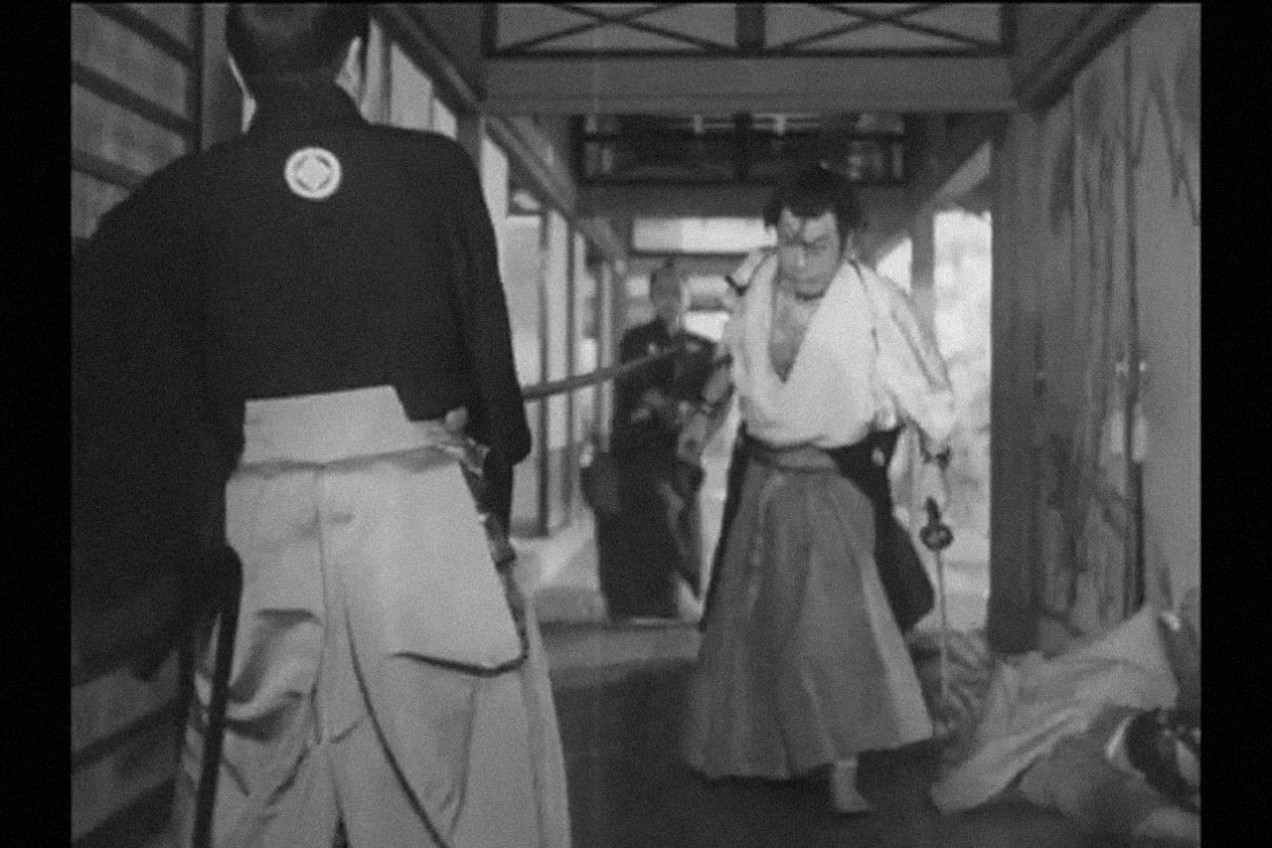 Although he is largely forgotten today, Kanjuro Arashi was once considered one of the greatest leading man of the jidaigeki. He began his career in the 1920s, the “Golden Era” of the genre, under the name of Chosaburo Arashi.

As Kanujuro “Arakan” Arashi, the professional dancer became famous. No other tateyuki (“heroic leading man”) was able to strike down his enemies so quickly; no ones sword was more swift and no ones movements faster than Arakan’s.

After World War II, Arashi joined the rising production company Shintoho. There he found a competent collaborator in the contract director Tatsuo Yamada who shot numerous historical films with the actor whose success gave new impetus to the career of the now highly regarded veteran.

In Yamada’s film Traitors of the Date Clan Arashi plays one of his few roles as the villain. Based on the “Date Sodo” (1660 – 1671), a historical family dispute within the samurai clan of the Date, and supported by a screenplay by the legendary Shintaro Mimura, the film offers Arakan the opportunity to shine in what could be his most diabolical role.

Japan during the Sengoku period: Lord Tsunamune of the Date clan causes great dismay among the population with his rude and violent behaviour. Tonomo Shirakawa (Yuichi Numata), a faithful retainer of the clan, travels to the capital in order to bring the lord to his senses. However, the evil chamberlain of the clan, Kei Harada (Kanjuro Arashi), thwarts the plan and orders the assassination of Tonomo. A short time later, the mad Tsunamune dies and his little son, Kamechiyo, becomes the new heir to the clan. Tonomo’s friend Tetsunosuke Matsumae (Juzaburo Akechi) is declared the personal bodyguard of the young lord. While Tonomo slowly begins to doubt Harada’s loyalty, the latter is planning to murder Kamechiyo…

Despite of Traitors of the Date Clan being based on the historical “Date Sodo” incident it fictionalizes certain elements for dramatic effect in typical Japanese fashion – of course, without neglecting the historical background. The real Tsunamune did not died from his supposed madness, but was only dismissed. The presentation of the historial retainer Kei Harada as scheming villain as well seems questionable.

The screenplay was written by the legendary Shintaro Mimura, a veteran of the genre, whose close collaboration with masterful director Sadao Yamanaka resulted in acclaimed works such as Humanity and Paper Balloons (Ninjo kami fusen, 1937). Here, his screenplay appears more conventional, yet incorporates some interesting elements in the form of subversive criticism of the ruling samurai class.

Shocking, for example, is the almost casual waste of life exhibited here so frequently. Several times the nasty conspirator manages to dodge danger by simply (and openly) killing his opponents. As the chamberlain, he is legally allowed to kill in order to reinstate his honour. At one point, even a child is murdered before his mother’s eyes – as the punishment for a stolen cake.

Like many jidaigeki of the 1950s, the film remains rather inconsistent in its reception of the bushido, “the way of the warrior”. He documents the killing and the hostility of life of the ideology of the samurai, but at the same time celebrates their willingness to sacrifice themselves for the “greater good”. That kid stole the cake because it was poisoned; his death is hyped as an exceptional deed of loyalty to his lord.

In terms of acting, the film is enormously benefited by the excellent performance of Kanjuro Arashi. His stylized performance follows the devices of the kabuki theatre. His speech is slow and empathic, his minimalist gestures meticulously controlled. Always, however, his presence seems subtly threatening, his poker face betraying slight hints of wickedness. Ultimately, all other actors pale in comparison to this impressive presence. 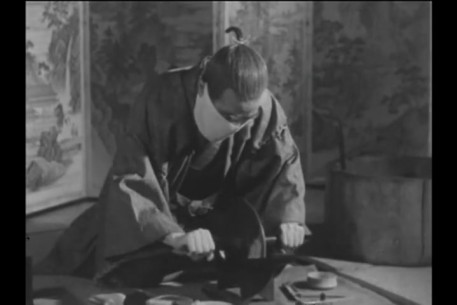 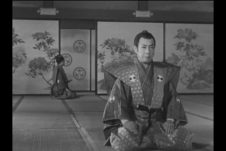 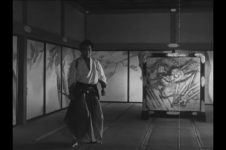 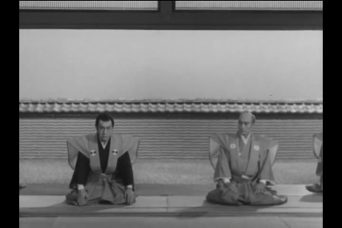 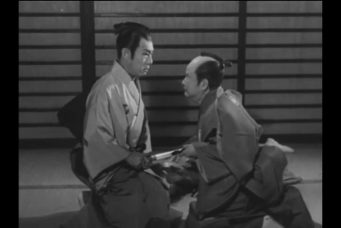 Fighting against him are no less than four heroes. At the beginning we follow the brave Tonomo, then the equally brave Kosuke and Tetsunosuke. At least, the character of the old Aki Ito, a real retainer of Date, who was slain by Kei Harada in an attempt to settle the dispute between the Date, stands out with his perceptive intelligence, however, he only appears towards the end.

None of these heroes leaves a great impression, since they also appear in succession, the film gains an episodic dramaturgy, which is, however, somewhat mitigated by the strict visual style of the director. Tatsuo Yamada was a competent Shintoho craftsmen classically trained under veterans such as Daisuke Ito and Nobuo Nakagawa.

More than in the history of the “Date Sodo”, Yamada seems to be interested in the artistic reception of the incident. Like Kanjuro Arashi’s performance, the visual style takes its cues from the kabuki theatre. The lighting is chiaroscuro-esque, the sets, similar to the Kabuki stage, sparsely decorated and the brooding soundtrack is accompanied by the traditional sounds of shamisen and biwa.

Through this theatrical aesthetics the film also attains slow burning tension. The movements of the characters are usually restricted to a minimum, the slow, electrifying pace of the film always threatens to explode in an act of violence, which is further enhanced by countless slow pan shots to the motionless faces of the characters.

In spite of these references to the kabuki theatre, the film is not an adaptation of Monzaemon Chikamatsu’s Meiboku Sendai Hagi (1777) as the DVD cover tells us. Like the bunraku piece, an extended (historically confirmed) fight scene is incorporated towards the end, however, this seems to be more likely a reference to Mansaku Itami’s “Akanishi Kakita” (1936) and follows it closely in terms of structure, camera work and even with partially identical props.

Here, we can find the inspiration of Yamada’s kabuki-esque asthetics. Director Mansaku Itami, a contemporary of Sadao Yamanaka and Shintaro Mimura, told his acclaimed version of the Date Sodo with elements of kabuki theatre as well, although this treatment ran against the trend of the times. Seeing the classical training of Tatsuo Yamada, the director seems to have taken his hints from Itami’s work.

In the end, it’s primarily Kanjuro Arashi’s performance which benefits from these references to the kabuki theater and the classical period of jidaigeki. Ultimately, Traitors of the Date Clan is little more than a vehicle of the big star, an exciting, well-written and directed vehicle, whose strict aesthetics give the legendary Arakan the stage to play out his formidable presence in a manner most impressing.