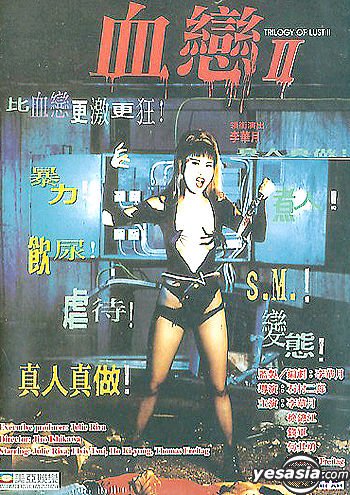 It’s not easy championing Category III films, and trying to convince people of the entertainment value of exploitation shockers such as Red to Kill or Dr. Lamb can be difficult at the best of times. As The Untold Story, Run and Kill and a handful of others have demonstrated, when used correctly and in the right context, extreme sex and violence can enhance a film, and that the Category III rating need not bring with it a promise of low quality as well as cheap, dubious thrills. Unfortunately, all such arguments and defence of the genre fall apart in the face of films like Trilogy of Lust 2 (also released as Trilogy of Lust 2: Portrait of a Sex Killer) a degenerate piece of low grade filth that brings shame not only to the genre, but quite possibly to all those who will admit to having watched it – indeed, searching for any images or footage from the film is likely to direct the curious to the more adult end of the online spectrum.

The plot of Trilogy of Lust 2 is the expected excuse for stringing together a series of sex scenes. The main character is Linda, played by Julia Lee (variously credited as Julie Riva, Chung Lai, and other aliases, and whom genre fans will recognise from vastly superior fare such as The Untold Story and Dr. Lamb), a woman who was raped and abused by her drunken uncle and his friends when she was a child. Deeply traumatised by her horrible past, Linda grows up to be an uptight businesswoman by day, but dons leather S&M gear once the sun goes down and stalks the streets, picking up men for sex and then killing them. Two of her colleagues at work come up with a scheme to trick some money out of her, and inadvertently end up stumbling upon her murderous secret, leading to events which push Linda further over the edge into full-on homicidal madness.

Possibly the most interesting thing about Trilogy of Lust 2 is that Julia Lee actually wrote and directed both this sequel and the original, possibly marking herself as an auteur of sorts. This in itself is a touch strange, given that neither of the two films appear to have any particular themes in common (the first film was a cheap knock-off of the Japanese The Perfect Education) or discernible point which Lee appears to be striving for, other than to prove that female filmmakers are equally capable of making this kind of sleazy trash. It’s possible, I suppose, given that she is a woman working in an almost exclusively male genre (both in terms of filmmakers and target audience) that there is some kind of deeply buried feminist subtext here, in the same way that some have stated similar arguments in defence of I Spit on your Grave. The character of Linda is certainly treated badly by all the male characters in the film, and does indeed exact revenge, though any such reading of the film is stamped upon by the sheer weight of its exploitative content and the fact that her character really doesn’t need to have sub-porno sex with her victims before killing them.

All of this, coupled with the few scenes of torture and murder which are scattered throughout, makes it very difficult to imagine exactly who Trilogy of Lust 2 was aimed at. Since the sex is so distasteful and unlikely to titillate even the most jaded devotee of cinematic sleaze, the film falls way out of the boundaries of the typical Category III genre, and there’s no sense of even the darkest humour or any attempt to make the violence either cathartic or fun in the grindhouse style – the film’s standout scene, if there is one, features genre favourite Elvis Tsui (A Chinese Torture Chamber Story) making an amusing appearance, lifting the mood, if briefly. Again, perhaps there is some kind of point that Lee is trying to make, or some personal message she is attempting to get across, though viewers are certainly not advised to try and fathom what exactly this could be.

Though for some ardent fans of extreme sleaze all this might sound like a recommendation, Trilogy of Lust 2 really is a film without any kind of saving grace. Devoid of charm, thrills, substance, or indeed any kind of point, it’s a Category III film which deserves to remain in obscurity.