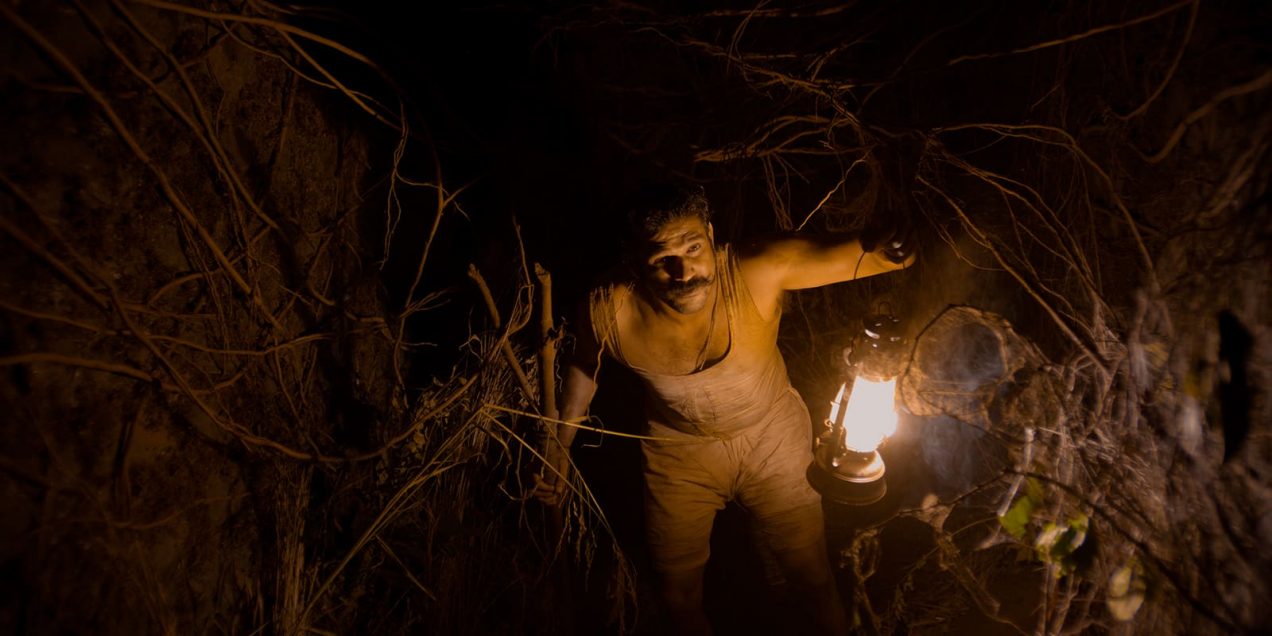 Fairly new to the scene, at least in terms of features, writer-directors Rahi Anil Barve and Adesh Prasad (given a co-director credit here) bring an impressive mythological horror to the big screen. Anand Gandhi, writer and director of critically acclaimed Ship of Theseus, acts as executive producer and ‘creative director’, reuniting with that film’s star and producer Sohum Shah (Talvar). (Prasad also acted as assistant director on that film.) The film premiered in the critics’ week section of the 75th Venice International Film Festival, becoming the first Indian film to be screened there, and has played at various other festivals including Fantastic Fest, Busan International Film Festival and BFI London Film Festival 2018, and was released in India from 12 October 2018.

In rural Western India in the early 20th Century, the mistress to the ageing lord of the dilapidated small village of Tumbbad looks after his grandmother in return for the promise of a single golden coin. Her oldest son Vinayak becomes obsessed with myths of an ancestral treasure buried somewhere within the ruins of his father’s estate, realising the grandmother, kept under locked away and seemingly ’blessed’ with eternal life and a never-ending hunger, is the key to finding it.

When the lord dies, and tragedy comes, the mother leaves and makes Vinayak swear never to return. Years later he does, however. Now an adult (Sohum Shah) with a family of his own, determined to uncover the dark secrets beneath the house in search of endless wealth. Can he avoid making the same mistakes as his ancestors?

Presented in three acts against pivotal moments in the history of India, such as the waning of the British Raj and just after independence was declared, the story charts the life of Vinayak, an unsympathetic lead whose fate is cast from the moment he breaks his promise never to go back. Unconcerned with the politics raging through India at the time, it’s telling that for a film that begins with a quote about man’s greed from Mahatma Gandhi. Perhaps it says even more about Sohum Shah that he came on board to play such a role.

Barve had kept hold of the original story for some time, having allegedly written the first draft when he was 18 and made a detailed storyboard over an eight-month period in 2009/2010. His most notable previous work being the short film Manjha, which won an award at the 2008 Mumbai International Film Festival and was released as a bonus feature on the Blu-ray release of Danny Boyle’s Slumdog Millionaire. It was only when Anand Gandhi and his team became involved, with actor Sohum Shah, that the project really started to gain traction. Easily there’s a philosophical synergy here with Gandhi’s ambitious film Ship of Theseus and his other works, even if the subject and genre are very different.

Though pure invention, the forgotten evil God writer/directors Rahi Anil Barve and Adesh Prasad have created for their Gothic fairy tale feels convincingly Indian, weaving in ideas from myths and folklore. In the ruins of Tumbbad, they find an atmosphere, not unlike that of the old Hammer films, which feels appropriate to the story. Such a created mythology has much in common with the films of Guillermo del Toro, such as Pan’s Labyrinth and The Devil’s Backbone. There’s no mistaking this is a hybrid, borrowing as many ideas from the West as it does from Indian folklore – for instance, when we discover just where it is that Vinayak goes to collect his treasure, the setting recalls the discovery of the cocooned colonists in Aliens – yet at the same time, it doesn’t feel overly derivative.

The period production is exquisite, capturing the feel of time; the stylish cinematography by Pankaj Kumar taking those low views to drive that Gothic feel. It’s the creature design that stands out though, feeling more like an 80s schlock horror with make-up effects – particularly when grandma appears with nails through her jaws holding them shut, only to pull them out. The animated CG work is not overt, a testament to the work of Swedish VFX company Filmgate Films, who also share a production credit. That the ’reveal’ of how the treasure is gathered is kept unseen for a significant amount of the film is a sophisticated move on the filmmakers.

Perhaps the inevitability of the storyline knocks a few points off the scares, though it also helps pull the story together. And the atmosphere and some well-placed frights make up for a lot. The final result has a local flavour that definitely feels fresh and different in horror film, which is a hard thing to pull off in this day and age.

Tumbbad screened as part of the BFI London Film Festival 2018.