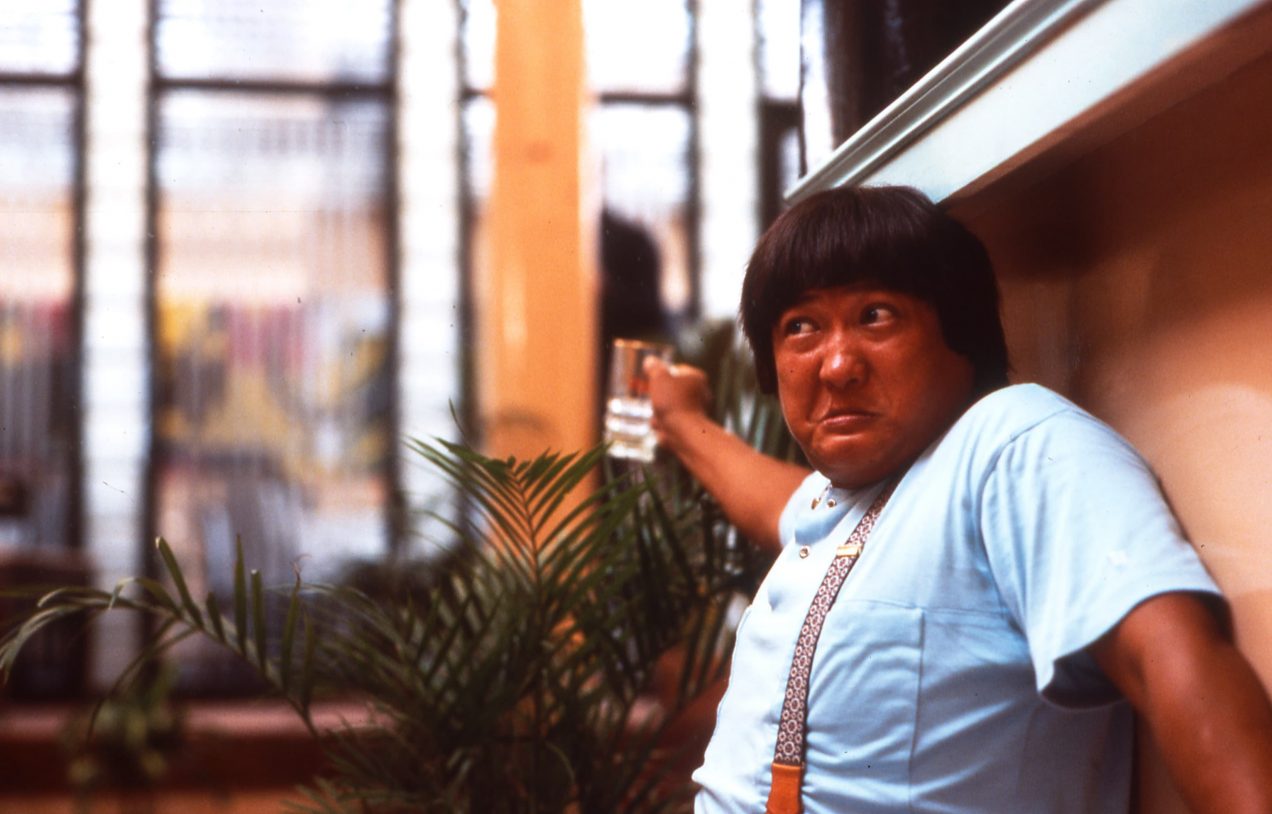 Released within the same year as My Lucky Stars, the breakneck turnaround time of Twinkle Twinkle Lucky Stars is both a blessing and a curse. The childish irreverence and Chaplin-esque slapstick humour sits side-by-side with badly-dated sexist humour; masterful action sequences featuring Jackie Chan and Sammo Hung at their peak plonked together without any real connective narrative tissue. At this point, if you’ve seen the previous instalments, reviewed here and here, you know the deal.

This time around, the gang – Sammo Hung, Richard Ng, Eric Tsang, Charlie Chin and Stanley Fun – are somehow roped into some kind of witness protection runaround, protecting Rosamund Kwan from menacing gangsters, a caper which sees police detectives Jackie Chan and Yuen Biao join up too. But there’s no logic as to how or why the Lucky Stars are connected to the police in this instance.

But of course, if you’re happy to go with the largely nonsensical story, what you get in the Lucky Stars series is simply a collection of barely connected but brilliant action sequences and some superb gags, mixed in with the aforementioned and deeply un-PC misogyny. Here, it is a little bit less pronounced than in My Lucky Stars, and the small-but-essential difference lies in the target of the jokes – most of the skirt-chasing comedy here is based on making the Lucky Stars gang look like fools and idiots. There are still a few moments of leeriness this time around, especially when the gang chases after Kwan – but remarkably less pronounced than in My Lucky Stars.

With that out of the way, what does Twinkle Twinkle Lucky Stars do differently than the other films in the series? The focus swings back in the way of comedy here, with some delicious gags and buffoonery, aided by the return of John Sham into the group. One extended thread early on sees Richard Ng turn to witchcraft to try and aid his luck with the ladies – the ladies, wise to his advances, pretend to play along until he falls flat on his face. The best gag is left for last – but a joke explained is a joke killed…

It seems there is less overt ambition in the scale of the fight sequences here – but this is more than made up for by their increased toughness and punchiness. An early warehouse sequence, featuring Jackie Chan, Yuen Biao and a young Andy Lau may be pretty much irrelevant to the plot but is a world-class example of the world-class quality of Hong Kong action filmmaking of the period. Every hit is visible, the athleticism of the performers is foregrounded and used to its fullest extent, and the environment is as much a part of proceedings as the actors. It’s a slight change of pace for Jackie Chan, given that his role here is predominantly more ‘serious’, with the comedy handled by Sammo Hung. The final fight sequences capping the film, mostly based around singular one-on-one duels, are equally thrilling. Simpler in some regards they may be than the horror house that sets up the finale in My Lucky Stars, or the automotive mayhem of Winners and Sinners, but the punchiness and the sharpness is all there. Less is more in this instance.

The Lucky Stars reissue boxset from Eureka is certainly welcome as a whole package – with each entry in the series offering some superb sequences. Despite all their flaws, these films still have plenty to offer, though Sammo Hung/Jackie Chan newbies will likely want to pick up other films first.

Excellent quality transfer. This includes multiple dubs, plus the extended 10-minute Taiwanese cut of the film and another informative commentary by Frankie Djeng. Elsewhere, there’s another outtakes reel, plus interviews with Aussie martial artist and actor Richard Norton and Richard Ng, the latter of which is quite entertaining – he isn’t afraid to be critical, and he refers to Stanley Fung and Charlie Chin as “the one with the moustache” and “the handsome one”, whereas he seems to remember everyone else’s names…