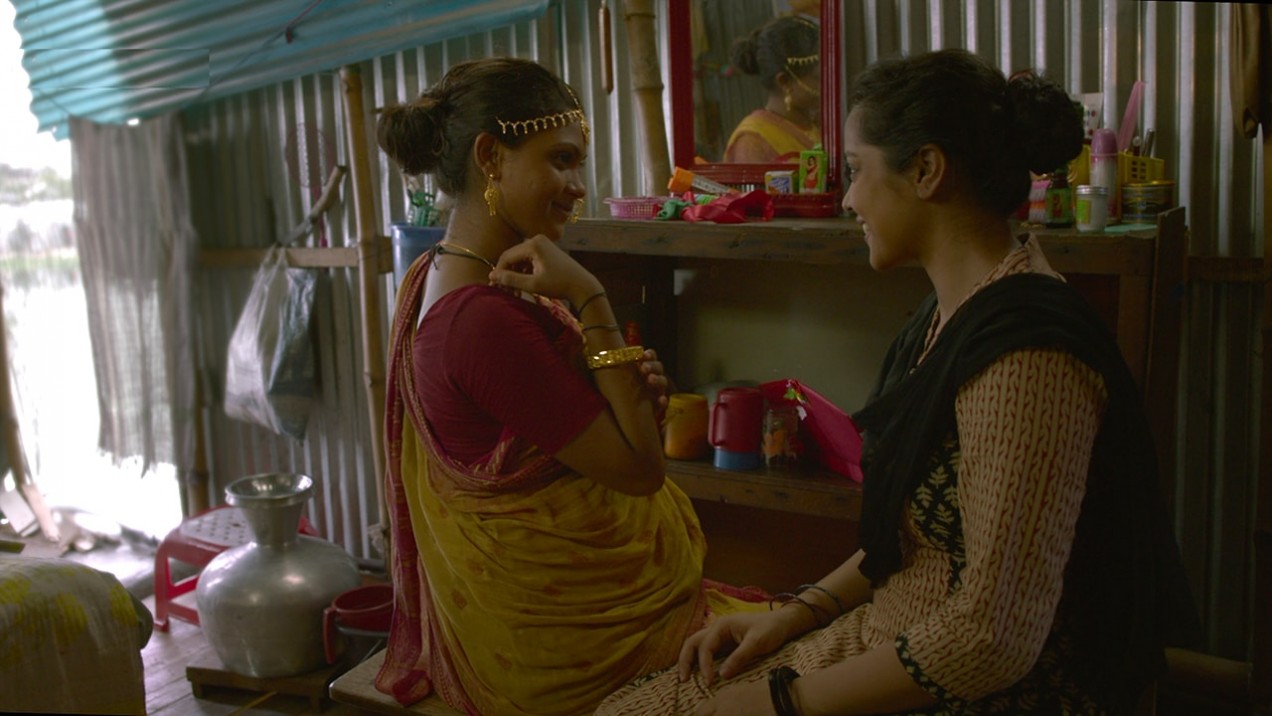 With Tagore’s Red Oleander on the backdrop, director Rubaiyat Hossain tells the tale of a woman in search of completion…

Everything is a work in progress in Rubaiyat Hossain’s second feature, starting with Bangladesh itself, country of origin, a nation in constant growth exemplified by its capital Dacca, a huge wide open construction site: apparently its title, Under Construction, was chosen because there was no way to keep cranes and scaffoldings out of the picture. Somehow they always managed to make their way into the film, from a distance or not.

I found it hard to believe, nevertheless this wasn’t an exaggeration. Try to travel to Dacca with Google Maps and when your little yellow man will scream its way down to the Street View you’ll see construction sites everywhere on top of each other. A still unfinished world like our main character’s personality: Roya (Shahana Goswami, Ra.One, Midnight’s Children), a woman gone beyond the crisis between past and present, in search of her future.

Under Construction is a story pushed to the limit, it’s like tense violin chords waiting to be played, with situations on the verge of a breakthrough. If bad or good, we’re not yet capable to understand. Roya is around thirty years old, wife to an arid business man, with a passion for theatre, hesitant about her aspirations: embrace independence or submit to the commonly accepted matrimonial duties and live as a silent Bengali housewife.

Visions from the past and the future come in her aid: first is Rabindranath Tagore and his play, Red Oleander, story of Nandini, a strong woman living in a dystopian society of miners deprived of their name, helping everyone while waiting for her lover Ranjan to come and save them all; the second is her young housemaid, Moyna (Rikita Nandini Shimu, Runaway), who sees Roya as an older sister to whom ask for counsels and the affection she can’t receive from her parents.

But it’s Roya herself who needs advices, divided between her husband’s mechanical desire to have a baby and her modern interpretation of Nandini’s rebellion against the machines. Stay in Dacca or travel across Europe to showcase her version of Tagore’s Red Oleander, on behalf of the fascinating intellectual manager Imtiaz Ilahi (Rahul Bose, Midnight’s Children, The Japanese Wife), which could also be seen as Bangladesh ability to appear in front of the world and screen its evolution,

Modern myths are replaced by contemporary ones, Tagore’s critic of the western industrial culture is stale when enacted among cement, dust and the bare structures of Dacca’s new buildings rising from the earth. Red Oleander breaths of new life in Roya’s hands: feminist, literally full of life, able to include elements considered taboo by her culture, respecting a global view on the themes revolving around women conditions. Under Construction flies high, far away from Bangladesh borders but still manages to represent its contemporary identity.

Rubaiyat Hossain directing style is born out of pure passion. What she hasn’t is both a long experience in filmmaking – Under Construction is only her second film and the first has been banned in Bangladesh – and a precise technique but that could be her strong feature. She’s fresh, modern and not at all influenced by any current trend, with her film we see a talented director who has assimilated the most morbid tendencies of world cinema. She uses what she’s learned by watching according to her taste and nothing more.

Under Construction is delicate, dynamic, and in less than 90 minutes perfectly balances every branch of its tale. Highlighting the line between reality and unreality with never annoying quick stereotypes (absent husband and good looking intellectual, they’re both classic clichés), always bound to their director’s vision. Her touch is everywhere and the film is suitable for multiple views, maybe enough to see the sky of Dacca stripped of its long cranes.

Roya’s important role, emotional and packed with sentiments, showcases Shahana Goswani immense skills in acting, a natural beauty with a strong presence that knows how to share screen time with other talented actors and actresses. She strikes the spectator as a believable common person, she resembles the truth even if she stands with one foot in fiction. It’s all like this, staying with each foot in a different shoe on parallel roads directed towards the future. It’s a game of opposites, high and low, top and down, read in front of or from a mirror, without a correct direction. Exactly as there is no correct definition for what reality is, a too personal idea, too subjective to be able to embrace a universal meaning: but this is a story in which both Roya and the fictional Nandini will find their own.

Under Construction will be screened on the 7th and 9th of February as part of the 22nd International Festival of Asian Cinema Vesoul 2016.