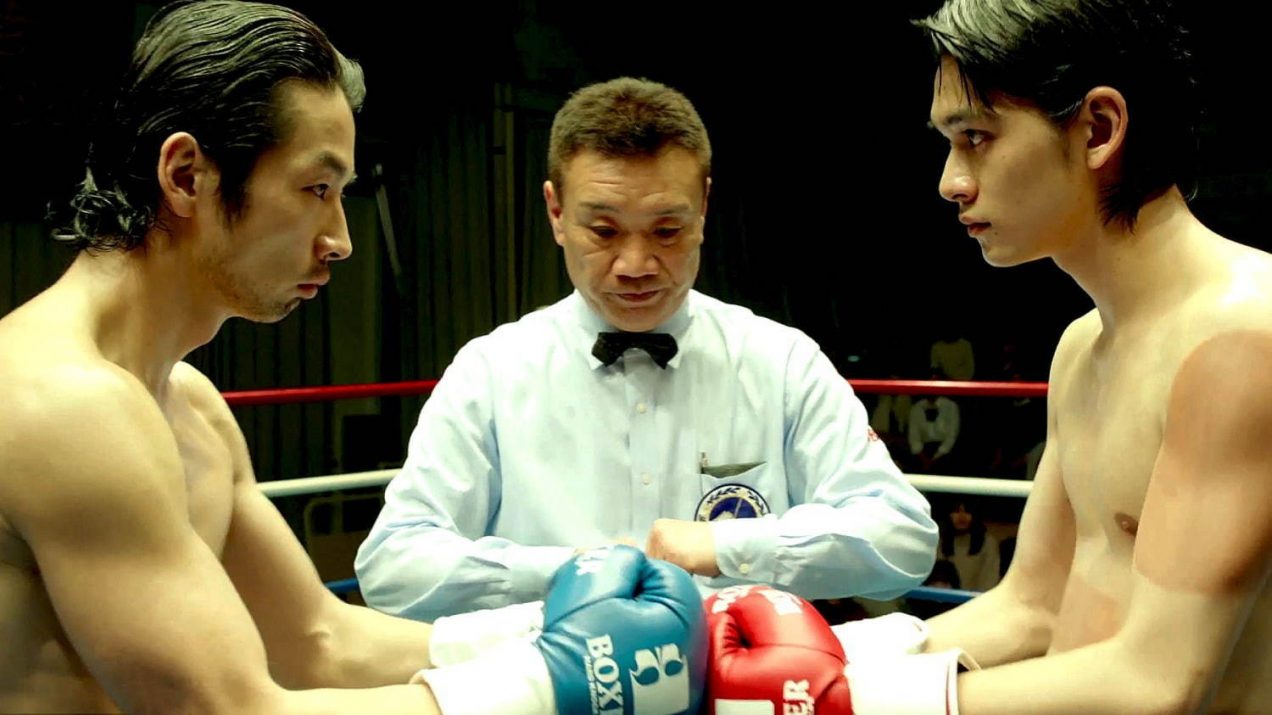 Take shows that the heroism of boxing lies in the subjective meaning that propels jabs, hooks and uppercuts…

While Masaharu Take has made films in many different genres, he is most well-known by international audiences for his boxing drama 100 Yen Love (2014). Six years later, Masaharu Take, once again, teams up with the screenwriter of 100 Yen Love, Shin Adachi, to deliver another boxing narrative, a two-part epic about a boxing has-been, a comedian-turned-boxer, and a young boxing talent.

Part 1. Ever since Akira Suenaga (Mirai Moriyama) lost against Takeshi Kaito for the Japanese boxing title in 2013, Akira’s career as a boxer has taken a turn for worse. Still haunted by his defeat, he spends his life losing small boxing bouts, driving sex workers to their destination, playing mahjong with his colleagues at the bathhouse, and training, in the middle of the night, at the boxing gym. Then one day, Akira’s boxing boss offers Akira a good-paying exhibition match with Shun Miyagi (Ryo Katsuji), a comedian turned pro-boxer for a television program, on the condition that he retires right after it. He accepts.

Part 2. One afternoon at a coffee shop, Akira meet his wife Yoshiko (Asami Mizukawa), who has been living apart from him with his son Taro for multiple years. He tells her he is finally ready to stop boxing and start living together again, but much to his surprise she hands him divorce papers to fill in. Yet, due to his wife’s words, escort Akemi’s problematic situation, and his son’s words of advice, he desires to postpone his retirement, but his boss is against any kind of return. Yet, when his boss receives an invitation for Akira to fight against the young Ryuta Omura (Takumi Kitamura), he urges him to accept the challenge.

Underdog is a rather intimate, down-to-earth, and gritty boxing epos. And while Take’s narrative boasts many side stories, the overarching theme of Take’s narrative is surprisingly simple. Underdog is all about the importance of finding meaning in one’s life, a meaning that can animate the subject and his body. This kind of meaning, as revealed in Take’s narrative, can be fantastic in nature or function of a certain desire, but, when all is said and done, any form of subjective meaning is function of relations that affect and impact the subject.

While some spectators might be daunted by the length of this slow-moving epos, i.e. four hours and 45 minutes, the length of the narrative is warranted due to the fact that every side-story, minor or major, has relevance for Akira’s main narrative, that every side of the story, be it directly or indirectly, strengthens the emotional power of Akira’s narrative.

Having described the main theme that structures both parts of Underdog, we can now explore the three important narrative sides in more detail. The main narrative thread, a thread that give a certain structure to the entire film, concerns Akira.

Akira is stuck in a certain passive depressive position – instead of living his life, he is being lived by his life. It is through a visual repetition of Akira’s routine that the spectator gets a sense of the lack of passion that marks his life. The spectator feels, in a very sensible way, that the only thing that keeps him going forward is the very structure of his life (e.g. driving escorts to their destination, finding a gateway for his frustration in sexual acts, training in the middle of the night, sleep in a messy apartment,… etc.) and not any kind of passion – he lost his passion in the fight for the Japanese title against Kaito. Yet, he keeps on boxing. He keeps on boxing without any passion and, often, as if he has already lost.

Why does he keep on boxing? That is one of the main questions that drives both parts of Underdog. Is it to regain his former glory, a glory he never had according to the boss of his boxing gym? Or is it the unfulfilled promise of becoming the world champion he made to his father? Or is it because he does not want to accept his prime is over – a vain attempt to escape the end of his career? Underdog does not provide any explicit answers to this riddle. Rather, the film implies that even Akira does not know anymore why he keeps on boxing, that boxing has lost its subjective meaning for Akira.

The second important narrative side, a narrative that dictates the story of Underdog Part 1, concerns Shun Miyagi, a comedian who turns into a pro-boxer to revitalize his plunging television career. Behind his showy personality, his jokes, and his expressive expressions lies, as quickly becomes apparent in the narrative, a boiling frustration. While some of his frustration is caused by the exploitation he is subjected to by friends (e.g. a friend using, without asking, Shun’s apartment for a big party), the true source of his frustration lies in the fact that no one takes him, as boxer as well as suffering subject, seriously. For him, boxing, the bout against Akira, is nothing other than an attempt to be taken seriously by the Other -the others surrounding him, but, par excellence, the parental Other.

In Underdog part 2, Akira is suddenly ready to quit boxing – why? – and return to his wife Yoshiko and his son Taro. Yet, due to some of his wife’s comments, comments that not only hurt his phallic manhood but also expose the truth (of his career) that he so long tried to avoid, he desires to postpone his retirement. He has, in fact, already become the very truth that he does not want to accept. It is, par excellence, women (i.e. Yoshiko and the escort Akemi (Kumi Takiuchi)) that confront him with his position of being castrated of that what would make him desirable for the female Other. Yet, it is due to Yoshiko’s continued refusal to speak with him, Akemi’s cry for help – a cry for him to assume something of a phallic position, and his son’s words of advice that something changes within Akira. But can these signifiers, beyond changing him somewhat at the level of his subject, enable him to re-find a certain subjective meaning and eros in the act of boxing?

The third important narrative side, a narrative that starts in Underdog part 1, but only comes to full blossom in Underdog part 2, concerns Ryuta Omura, a talented young boxer who enters the world of pro-boxing. In contrast to Akira, his boxing is driven by an energizing passion. His passion strengthens his punches and drives his narrow focus on refining the art and the skill of his boxing. Yet, while the second part of the narrative explores his youthful family happiness – with his wife Kana Omura (Minori Hagiwara) and new-born child, Underdog Part 2 is all about his delinquent past catching up with him, the subjective change that Akira, as boxer, caused in him, and the revelation of the reason that drives him and his boxing.

The composition of Underdog differs for the non-boxing sequences and the boxing sequences. The non-boxing sequences are framed with a concatenation of static shots with, in some cases, some fluid cinematographical movement thrown into the mix. The framing of the boxing sequences is, in contrast, marked by a dynamic roughness – a roughness that marks most of the static and dynamic shots. This roughness does not only underline the grittiness of the art of boxing, but also allows the dynamic of the boxing game to shine in all its exciting and tensive glory. In some rare cases, slow-motion is applied to strengthen the impact, physical as well as mental, of certain punches or certain boxing-related moments and, in some other cases, subtle musical accompaniment is used to highlight the emotional undercurrent that underpins a fight or a training sequence. A minor difference between Underdog part 2 and Underdog Part 1 is that, to heighten the emotional stakes, Part 2 relies more on musical accompaniment in its framing of boxing-related sequences. Yet, overall, Take does not overly rely on or overutilize cinematographical decorations to give boxing and its related activities its power to engage the spectator. The training sequences and the boxing bouts in Underdog – and especially the finales of both films – are thrilling and engaging, pure and simple, due to the boxing as such.

The spectators’ sense that Akira lacks passion is, first and foremost, a function of the splendid acting-performance of Mirai Moriyama – Moriyama’s empty look is effective in communicating his irritation and dissatisfaction with his current life. Yet, the play with colours and shadows and, at certain times, the musical accompaniment help emphasize the passivity and the depressive emptiness that marks the life of our main character.

The subjective change that Akira undergoes is, as can be expected, also made sensible by his acting performance. The subjective change is most sensibly underlined by the shift in his facial expressions. His face, first utilized to communicate his passively accepted dissatisfaction to others, has turned into an instrument to evoke a frustration of not being able to do anything despite wanting to and communicate a piercing resoluteness. The shift in his facial expressions underline that Akira does not passively accept his fate anymore, that he wants to alter the course of his and other subjects’ life actively, and that he has found some eros to animate his passionless body.

Underdog is an amazing narrative, not because it delivers an epic boxing narrative with lots of thrilling boxing action, but because the epic nature of the narrative is psychological in nature. Rather than dazzling the spectator with fantastical heroism of the art of boxing, Take takes the spectator on a lengthy adventure that reveals, in an emotional and surprisingly cathartic way, the importance of finding subjective meaning in one’s life to animate one’s subject and direct one’s subjective trajectory. Underdog beautifully and powerfully shows that the heroism of the art of boxing lies in the very subjective meaning that propels the jabs, the hooks, and the uppercuts.