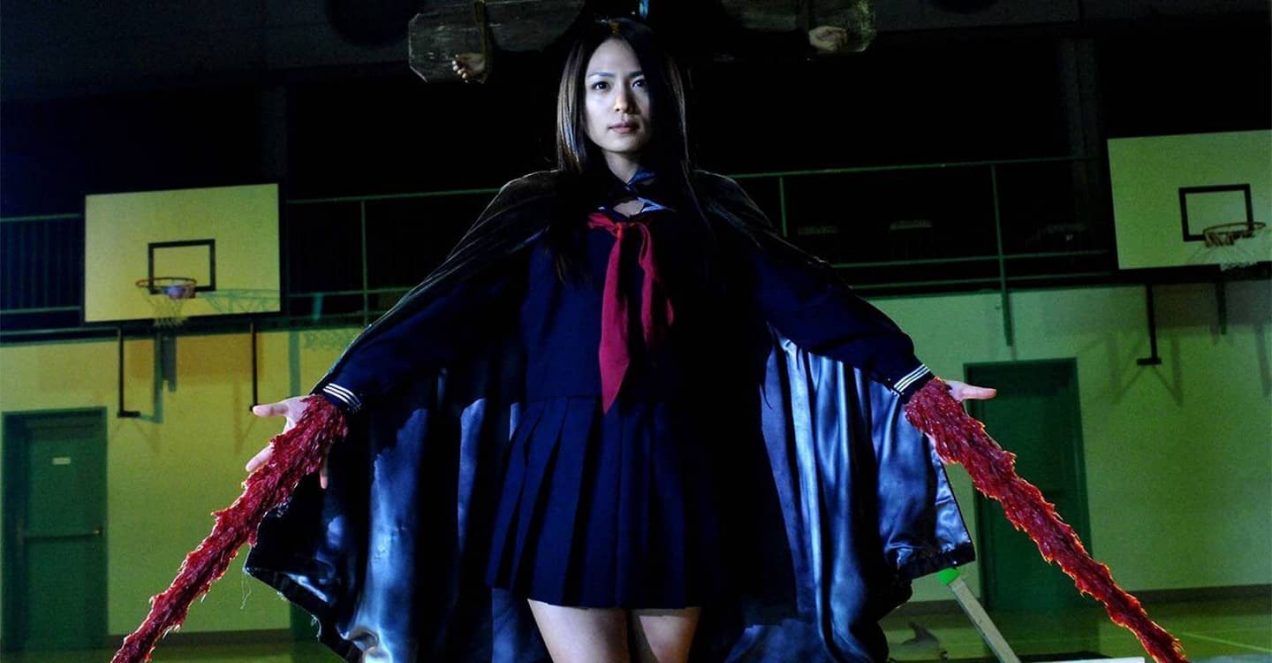 Originally unleashed back in 2009, Vampire Girl vs Frankenstein Girl is another slice of madness from Japanese director Yoshihiro Nishimura, one of the most popular cult helmers working in Japan in recent years. For the film, the Tokyo Gore Police legend joined with fellow splatter auteur and Zombie Self-Defense Force director Naoyuki Tomomatsu for an adaption of the manga by Shungiku Uchida. The film is a lunatic mixture of teen love, gore, wrist cutting and inappropriate surgery, with an awesome cast that includes the amazing gravure idol and Carved 2 actress Yukie Kawamura, OneChanbara star Eri Otoguro Takumi Saitoh of Robo Geisha, and Eihi Shiina from Tokyo Gore Police and Takashi Miike’s Audition.

After throwing the viewer straight into the action with a crazed all-action prologue of Vampire Girl Monami (Yukie Kawamura) slicing her way through a trio of stitched up opponents, the film switches back to more innocent territory, on Valentine’s Day in a Tokyo high school. Monami, a newly transferred student, gives a chocolate gift to class hunk Mizushima (Takumi Saitoh), neglecting to tell him that it contains a few drops of her special vampire blood. This doesn’t go down too well with his erstwhile girlfriend, the psychotic goth lolita Keiko (Eri Otoguro), who tries to push Monami from the school roof, only to fall herself. Thankfully, her father (Kanji Tsuda, 20th Century Boys) is not only the vice-principal, but a mad scientist aiming to inherit the mantle of Dr Frankenstein, and he uses a drop of Monami’s blood to perfect his research, bringing his daughter back from the dead in super-powered, patchwork form. This sets the stage for an epic showdown between the two monstrous females as they battle over the rather confused Mizushima, with blood and body parts flying all over the place.

This synopsis really only scratches the surface of the utterly delightful dementia that is Vampire Girl vs Frankenstein Girl, which has more bizarre and imaginative twists than a dozen other films of any description combined. Yoshihiro Nishimura and Naoyuki Tomomatsu prove to be a perfect partnership, packing the film full of jaw-dropping moments of grotesque creativity that keep the viewer desperate to see what insanity comes next. However, what is perhaps even stranger than any of its wild scenes of excess is the fact that the film is remarkably coherent, and like Sion Sono’s masterful Love Exposure, it functions very well as a wicked pastiche of the high school teen love story, complete with overwrought emotions, crushes and awkward confessions of affection. Yukie Kawamura is appealing in the lead, turning in a great performance that makes her character far more than a mere cutesy piece of homicidal eye candy. Whilst it would be going a bit far to call the film moving, it does catch perfectly the exuberance of young love and jealously, and is oddly affecting right through to the amusing reversal ending.

The film also works superbly as a vicious send-up of modern Japanese youth culture, poking merciless fun at teen trends and obsessive behaviour. The high school student body is depicted as being made up of ridiculous gangs, from the manic wrist cutters to the over-tanned girls who are determined to convince themselves they are black. This leads to some hilarious scenes, which range from the cleverly satirical, through to the mind-bogglingly random, with sudden outbursts of singing, dancing and the chanting of Barak Obama slogans. Without wishing to spoil too much of the fun, also worthy of special mention is a guest appearance by J-horror director Takashi Shimizu as a teacher poking fun at his own Ju-on franchise. The film sees Yoshihiro and Naoyuki having both improved considerably as directors since their earlier outings, and it also impresses on a technical level, being kinetic, well-paced and exciting, without any of the awkward lulls of similar genre efforts. The visuals are colourful and cartoonish, with some wonderfully inspired moments scattered throughout.

Of course, the carnage and gore are likely to be the main draw, and fans will be glad to hear that the film does not disappoint. Whilst not as sexually perverse as Tokyo Gore Police, the film is arguably every bit as blood-splattered, with the screen being painted red for a large part of its short running time. The gore effects are excellent, if frequently absurd, with body parts being thrown around with liberal abandon, before being sewn back on in decidedly inappropriate ways. Although never sadistic, with even the horrifying wrist cutting scenes being played for laughs, the film really is a catalogue of far out and freakish violence, and is guaranteed to show even the most experienced gore hound something they haven’t seen before.

Really, no fan of cult cinema can afford to miss Vampire Girl vs Frankenstein Girl, which still stands as one of the very best Japanese splatter films of the last decade and which shows further evidence that Yoshihiro Nishimura is an absolute genius. Somehow managing to ring true amongst all the chaos, for this kind of film it comes about as close to perfection as it is possible to get.